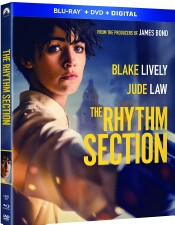 So I had an interest in this film since I saw the preview for it; Blake Lively cast in her own revenge film. I know there is no shortage of this type of film. Luc Besson has actually made a career out of this type of film archetype, with each film being excellent in my opinion. Lively has never attempted anything of this nature, which I always find intriguing, to see an actress stretch her creative muscles. Sadly, I wasn’t able to convince my wife or my friends of the film’s potential, so on the rare occasion that I attend movies in a personal nature, I wasn’t able to steer anyone towards seeing this film with me. I mean, Blake Lively, Jude Law, and Sterling K. Brown — you would have thought I wouldn’t have to do that much convincing, but sadly everyone I showed the trailer to felt that the film’s premise had been done before. I won’t dispute that there have been several films that are similar, but in my opinion, The Rhythm Section brings a unique grittiness to the genre. It took some type to see the film, and though I do feel that the film rushed its conclusion, I thoroughly found it enjoyable, and the mentor/mentee dynamic between Law and Lively was a huge selling point for the film.

Lively plays Stephanie Patrick. After her family is killed in a plane crash that she was meant to be in, she retreats into a life of drugs and prostitution. One day she is approached by reporter Keith Proctor (Raza Jaffrey, Homeland), who informs her that the plane crash, which was initially believed to be a tragic accident, was actually a terrorist attack that was covered up. Stephanie immediately is drawn into the world of covert intelligence as she attempts to unravel who was behind the crash. Aided by a former British intelligence agent (Jude Law), she trains to exact her revenge on the people who killed her family. However, in the world of espionage, everything isn’t always what it seems.

So what I found unique about The Rhythm Section is that it was very grounded in realism. Lively’s character does not go from everyday citizen to La Femme Nikita; in fact, I would say that she never reaches that status. She struggles with every battle, she struggles to overpower larger enemies, and she especially struggles with her conscience over the idea of innocent bystanders being harmed during her quest for revenge. This is where we see the importance of Law’s character in the film; years of service in the world of espionage has hardened him as well as given him a sort of moral flexibility. He can do the things that Lively’s Stephanie cannot. He also does not pull any punches with her, which is seen when the two first meet where he basically expresses that he has no faith that she will be able to accomplish her mission, but still provides her with aid despite believing that she will get herself killed.

In regard to the story development, I found this to be original in the manner in which the film unfolded. I wasn’t able to predict how things would develop; when I thought they would go left, they went right. The only issue I really had was the rush towards the conclusion. Now, I had a suspicion how it would end when it came to who was the ultimate person responsible for the act that has fueled Stephanie’s revenge mission, but getting to that point had been well-paced throughout the film until we got to the film’s climax, from which if I had to guess some scenes were removed to save on runtime. Though Stephanie verbally relayed how she figured out who was ultimately responsible for the attack, I just feel that there needed to be a moment of realization or a clue found that would have helped the audience come to the same conclusion as to who the antagonist was. That aside, I found the film to be well-paced; we got to watch Lively’s character on this learning curve as she slowly became proficient as an assassin. I’ll say that she definitely learned to talk the talk before she could walk the walk. Her exchange with Sterling K. Brown’s character as they negotiate the cost of an execution was masterful; it was like a chess match as both characters felt each other out, neither believing that the other was who they said they were. That is what I would expect the world of espionage to be like: I’ll work with you, but I don’t trust you.

I may have had to wait to see the film, but it was worth the wait, as it truly proved to be a unique experience. Yes, as previously stated, there are plenty of films of this variety, but The Rhythm Section still managed to establish itself as unique and bring something fresh to the table. Lively can scratch being a femme fatale off her list of roles to play, and she established a great rapport with Jude Law and Sterling K. Brown; she had chemistry with both actors that I have no doubt will carrying over the next time that their paths cross, and I have no doubt that there will be a next time.

Jeremy Butler is a film school graduate of the International Academy of Design and Technology. He is been writing for Upcomingdiscs since 2012; however, movies have played a big part of his life for much longer. Favorite genres include horror, science fiction/fantasy, and comedy. Favorite movies are V for Vendetta, Boondocks Saints, Kiss Kiss Bang Bang, and The Godfather.
Gunsmoke: The Complete Series (Also Complete 20th & Final Season) D-Day: Normandy 1944 (UHD Blu-ray) (4K)