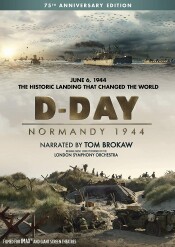 “Soldiers, Sailors, and Airmen of the Allied Expeditionary Force: You are about to embark upon the Great Crusade, toward which we have striven these many months. The eyes of the world are upon you. The hopes and prayers of liberty-loving people everywhere march with you… I have full confidence in your courage, devotion to duty, and skill in battle. We will accept nothing less than full victory. Good Luck! And let us all beseech the blessing of Almighty God upon this great and noble undertaking.”

They’ve been called The Greatest Generation, and who are we to argue the point? Sitting here writing reviews from my comfortable seat in a state of the art home theater, I’m in no position to lay claim to the title. They fought in the bloodiest conflict in modern human history. Over 20 million were killed. That’s a staggering number. If you’re like me, it’s not even real. I invite you to bear witness to one of the most important events in American history. World War II brought America out of the shadows of isolationism and onto the world stage as a leader and eventual superpower. D-Day was one of the momentous moments of both the war and America’s transformation. There have been many documentaries and complete series events that have tried to chronicle this time in American and world history. We’ve all seen the grainy and haunting images, and Hollywood has done its best to bring that reality into our living rooms and local multiplexes. None of it can ever take you there. None of these efforts can truly give us the experience those brave soldiers really had. This film is a bit refreshing in the fact that it doesn’t really try to bring you into the action. This is completely an educational experience. The men who were actually there are nearly gone, and within the next decade or so they will indeed all be gone. Perhaps it’s less important to feel what they felt than to remember. This documentary helps us do exactly that.

The film is narrated by Tom Brokaw, and that’s about as good a choice as you’ll find. It was Tom Brokaw who coined the term The Greatest Generation to describe the people who participated in World War II. Add his years as a journalist and news anchor and you have about as much authority on the subject that you will find. Obviously, he didn’t write the script, but his voice lends that much need authenticity to it all. And that’s doubly important here, because this documentary doesn’t take the path most traveled in these things. There is no grainy vintage footage to see. There aren’t any interviews with the men who were there. Instead this film utilizes a variety of modern methods to tell the story.

The most prominent element here is the use of brightly-rendered war maps that are used to demonstrate the story with a little of the war’s history to get us to the bigger point. These maps contain the usual animation and colors to demonstrate the advances and retreats at crucial moments in the conflict. The maps are often accompanied by computer-generated segments that bring these planes, tanks and other artillery to life. The battle areas themselves look a lot like the region views of the Sim City games that I so much enjoyed years ago. In fact the style of this presentation makes this look and feel very much like a kind of video game. As areas of interest are described with computer-enhanced pictures of points of interest, little Google-Map-like pins float above them offering identification information. There are a few limited reenactments with actors, but that makes up just a scant few minutes of the presentation. A few vintage photographs are offered, but they are updated and computer-colored and enhanced to give them a much more modern look. Finally, there is a technique called sand animation that creates some of the more stylish moments.

Sand animation is a bit like stop-motion. But instead of models the artists use grains of sand on a lighted table. With brushes they draw pictures and manipulate them a small bit at a time. The end result is something that looks a little like pencil or charcoal drawings that are animated. As much as the process completely fascinated me, it was a bit too distracting from the intended points. It’s quite a stylish artform but draws too much attention to the style to the detriment of the material.

The closest we get to the voices of the actual participants comes in actors’ readings of letters that were written during some of the pivotal moments. We are given only their first name and where they were as a very crude reenactment shows them writing the letters. I assume they are authentic, but not enough information is given, and the narrative does not necessarily acknowledge that fact.

D-Day Normandy 1944 is presented in a modified aspect ratio of 1.78:1. The ultra-high-definition 2160p  image is arrived at by an HEVC codec with a highly variable bitrate that moves from as low as 50 to over 115 mbps. Most of the material was created in the computer, so it’s going to look quite pristine here. It’s pretty much like a computer-animated feature film. The material was rendered at a native 5K, so the native resolution feeds nicely into this presentation. Some of the live action was done on IMAX 70mm film, so the native resolution all the way around looks great. The HDR allows for vibrant colors which look particularly nice on the maps. The reds really bring the images forward. Contrast helps make the stylish sand animation work well even if it is an overall distraction. The film was shot in 3D, and there are places where that is quite evident. However, this set does not include a 3D version on either format.

The DTS-HD 5.1 track  serves the narration most. It’s all powerfully projected and crisp and clean. The subs bring many of the battle scenes alive, and they will shake a good setup room from time to time. The surrounds aren’t terribly aggressive and come alive most during the score where the London Symphony Orchestra creates a dynamic experience and plenty of ear candy.

The extras are all on both the Blu-ray and UHD copies of the film. The UHD extras are in 4K but not HDR.

Normandy Today: (22:13) This is an older raw footage feature of Normandy post-war but not nearly today. It’s poor quality 16mm and there only for some historical purposes. There’s no narration, only ambient sounds.

This one is going to be a bit more of a hard sell. The film doesn’t contain much of any kind of natural footage. It’s those grand natural settings that make these films so engaging in IMAX. It held my interest mostly because I have more than a passing interest in history. But it’s more educational than entertaining, and that’s even more apparent by the places where the film played in IMAX. It was mostly military museums and the like. There’s just not as much WOW in the visual department, but the information is certainly important and worth the time it takes to watch the film. “While the last witnesses of the Second World War are departing forever, let us not forget what millions of men and women had to suffer in order to leave us a better world.”

Gino Sassani is a member of the Southeastern Film Critic's Association (SEFCA). He is a film and television critic based in Tampa, Florida. He's also the Senior Editor here at Upcomingdiscs. Gino started reviewing films in the early 1990's as a segment of his local television show Focus. He's an award-winning recording artist for Omega Records. Gino is currently working on his 8th album Merchants & Mercenaries. Gino took over Upcomingdiscs Dec 1, 2008. He works out of a home theater he calls The Reel World. Favorite films: The Godfather, The Godfather Part II, The Body Snatcher (Val Lewton film with Karloff and Lugosi, not the pod people film), Unforgiven, Gladiator, The Lion King, Jaws, Son Of Frankenstein, The Good, The Bad And The Ugly, and Monsters, Inc.
The Rhythm Section (Blu-ray) War of the Worlds (2005) (UHD Blu-ray) (4K)