Head of the Class: The Complete First Season 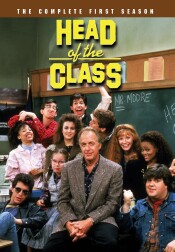 So knowing nothing of this series as it pre-dates my existence, I did not expect to identify with it at all. I expected for the jokes to be generational, and for the subject matter to be irrelevant. Fortunately, this was not the case, as Head of the Class appears to be a series that in my opinion stands the test of time and provides invaluable life lessons that society is still very much in need of. It stars WKRP in Cincinnati’s Howard Hesseman as Mr. Moore, a substitute teacher who finds himself subbing for a high school’s Individualized Honors Program (IHP), an elite program for the kids with the highest IQs. Expected to little more than read magazines while the kids basically educate themselves, this idea does not sit well with Mr. Moore. Though a laid-back person by nature, he endeavors to do more than just sit back and pass the time, much to the chagrin of Principal Dr. Samuels, who prides himself on the program he designed as well as pushing its participants to academic excellence. Though academically advanced, these students know little of the world, as well as never venture out of their comfort zone. This is where Mr. Moore has the opportunity to make a difference by showing them that they can be more than what society expects them to be.

This philosophy is on display very early on, in the first episode, which features an upcoming dance, and the IHP students do not intend to attend. When investigating their reasons for their non-attendance, we discover evidence of self-esteem issues, parental embarrassment, and fear of rejection. Without really meaning to do so, given his own words to Dr. Samuels, “I’m only here for two days, how much damage can I do?” Mr. Moore manages to get several students to step out of their comfort zone, prompting them to overcome their very reasons for their initial refusal of the dance. This is most evident with Arvid (Dan Frischman), who overcame multiple issues and held firm to the principles that were imparted on him. Long story short, it was a very strong opening episode. It changed my feelings regarding reviewing this; it made me hopeful about the next episodes, although I was skeptical about whether the series would be able to keep this momentum going. I wondered about how many life lessons could be imparted or the methods in which Mr. Moore would utilize to impart them.

Another thing that had to be cleared up was how long would he be subbing for the class? Obviously he was a vital part of the series, so the next obstacle was going to be how this sub would gain a permanent position. The idea of becoming a full-time teacher was a given. The show could not exist in a vacuum, so this idea was going to have to eventually be addressed. To the show’s credit, it was not drawn out all season, as the matter was actually resolved early on as the original teacher returned and quietly gave his blessing for Mr. Moore to take over in episode six (Teacher’s Teacher). I found this to be a very good handling of this obstacle. It was clear that there was chemistry between the IHP students and Mr. Moore, and Moore clearly had a unique way to reach these kids. The fact that that it was observed by another faculty member goes a long way.

Another notable episode was Rebel without a Cause, when an altercation between Eric and another teacher prompts another important life lesson regarding bullying. This was a unique take on the subject, as it dealt with the students being cruel to a teacher on the verge of a breakdown. It was also quite realistic, as superior intelligence does have a tendency to have people look at those not on their level as beneath them. Mr. Moore’s method of getting the kids to see the error of their ways is an oldie but a goodie, the ol’ taste of their own medicine. It’s a bit cliché, but very effective.

There were quite a few familiar faces in the series. The obvious one is Howard Hesseman of WKRP in Cincinnati fame. Then there is class clown Dennis Blunden, played by Dan Schneider, who is most famous for his work as a television producer; he has had a long-standing relationship with Nickelodeon and is responsible for such content as The Amanda Show, Drake & Josh, ICarly, and Victorious. Then there is Dan Frischman of Kenan & Kel fame; he was the most difficult for me to place. I kept looking at him, and I knew him from something from my childhood, but I couldn’t place him, and then the next thing I know, it was light a lightbulb: “Who loves orange soda?” Finally was Robin Givens, who I instantly recognized on the show’s DVD cover.

Initially, I thought the series to be a one-done season, but my research proved that the show actually ran for at least five seasons. Unfortunately, Hesseman departed after the fourth season, but needless to say this was a grand accomplishment. I do hope to have the opportunity to review the subsequent seasons in the future, as this was a very enjoyable experience, and not just for me, but it even managed to entrance my daughter for a bit, but only for a bit.

Jeremy Butler is a film school graduate of the International Academy of Design and Technology. He is been writing for Upcomingdiscs since 2012; however, movies have played a big part of his life for much longer. Favorite genres include horror, science fiction/fantasy, and comedy. Favorite movies are V for Vendetta, Boondocks Saints, Kiss Kiss Bang Bang, and The Godfather.
Pennyworth: The Complete First Season (Blu-ray) South Park: The Complete Twenty-Third Season (Blu-ray)