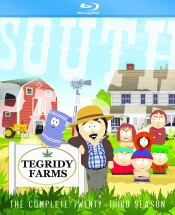 “Everyone in this country is getting dumber, and I wish marijuana was illegal again!”

If anything can push the weed cause back 20 years, it’s Tegridy Farms. South Park starts its 23rd season with a bit of a new twist on things. For the entire first half of the season, the opening credits change to make it look like a Tegridy Farms show. It’s cute and funny for like the first three minutes. I was sick of the concept already last season. So for the first half of Season 23, you’re going down to Tegridy farms. In fact it’s only the 10th season where the credits and show come close to returning to normal. After Tegridy Farms, there’s PC Babies, which actually made me pine for Tegridy Farms for a few minutes. The season sees a few highs, and I don’t mean in Randy March’s pot farm. Mostly the boys appeared to coast this season, and with a new 3-year deal in place to keep South Park airing into its 26th season, I hope the coast was merely a break so that everyone could catch their wind just a little bit.

As I’ve mentioned, the first five episodes deal mostly with the farm. Randy is looking for ways to expand and protect his business, while his wife and daughter wish it would all just go away. He goes after home growers who start to eat into his profits by bombing their gardens… and some of the home growers themselves. It all gets blamed on a Mexican Joker when Kyle ends up in an illegal immigration camp because Cartman discovers he can get people to bend to his will by threatening them with ICE. Of course, it all backfires. Randy eventually discovers that he can make a ton of money by bending to China’s heavy will, and the show does one of the season’s best episodes that deal with corporations looking the other way in China to turn huge profits. The entertainment industry has been a big part of this controversy by allowing their films to be edited by Chinese censors. Great poke at Disney here, and the finest hour of the year. The Winnie the Pooh satire is amazing, and this coming from a huge Disney Pooh fan. But it all blows up as Randy gets too cocky and the series celebrates its 300th episode with Randy throwing in everyone’s face that he’s made 300 grand from the China deal. It all ends with a Halloween special which actually refers to Randy’s latest pot blend and an episode Season Finale which isn’t, but puts an end to the Tegridy Farms show. Can I get an Amen?

This season I discover that Cartman and I are more alike than I thought. He’s terribly afraid of needles and causes a stir when he refuses to be vaccinated. This episode turned out to be about six months ahead of its time as the town turns into an angry mob because they consider Cartman’s vaccination refusal to be putting the town’s heath at risk. Little did any of us know then. I am notoriously needle-phobic and might find myself in Cartman’s shoes come the day a COVID vaccination is created.

The world has changed considerably since the last episode of the season. In just the last four months there has been such radical change that the show could feed off just these four months for years. I suspect the boys will find the environment changed with limits on how far they can go. I hope it doesn’t happen, because my favorite thing about South Park is that it’s allowed to exist. Every time this show treads on forbidden ground, I get hope that we’re not all lost yet.

Another example of the boys coasting is the lack of even the mini-commentaries this time around. I know it might have been axed by the current health issues, but it seems like something that could have been done from home. I know a lot of entertainers who are capable of producing great work from their homes. A simple recording should have been cake. Let’s see if it returns.

You do get the Social Media Text Commentary.

I suspect that when we are all dead and gone there will be two things we can count on continuing beyond the end of human civilization. The cockroaches will inherit the world, and they will all be watching South Park, the only television show still running. It’s already been 23 years, and doesn’t it feel like 50? I don’t mean that in a mean way. I love South Park, but I’m starting to find it hard to remember what life was like without it. I’m convinced it will survive us all, and AI versions of Parker and Stone will be producing it until the planet is finally vaporized … and I’m not sure even that will stop this show. For now we all have to make the best of a bad situation, and home entertainment can help with that. “I know. I know it sucks. But we’re stuck in here together. Come on, boys. All we have to do is try to make the most of it.”

Gino Sassani is a member of the Southeastern Film Critic's Association (SEFCA). He is a film and television critic based in Tampa, Florida. He's also the Senior Editor here at Upcomingdiscs. Gino started reviewing films in the early 1990's as a segment of his local television show Focus. He's an award-winning recording artist for Omega Records. Gino is currently working on his 8th album Merchants & Mercenaries. Gino took over Upcomingdiscs Dec 1, 2008. He works out of a home theater he calls The Reel World. Favorite films: The Godfather, The Godfather Part II, The Body Snatcher (Val Lewton film with Karloff and Lugosi, not the pod people film), Unforgiven, Gladiator, The Lion King, Jaws, Son Of Frankenstein, The Good, The Bad And The Ugly, and Monsters, Inc.
Head of the Class: The Complete First Season Evil: Season 1