Posted in: Disc Reviews by Brent Lorentson on June 26th, 2020 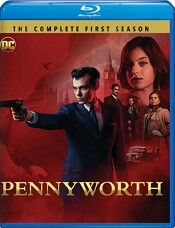 It continues to amaze me how Warner Brothers does so well with their DC products in the television universe but manages to execute so poorly with their films.  Despite being a bit formulaic, the CW DC shows are still a blast to watch, but it’s the more adult-oriented shows Titans, Doom Patrol, and Swamp Thing that have left me most impressed.  Now they have released Pennyworth for the Starz Network. Despite the confidence I have in the other shows, I went into this one with cautious optimism.  The biggest question that bothered me was do we need another series that delves into the Batman universe? Gotham recently wrapped up, there’s a Batwoman  series, Joker was last year, and a new Batman film coming next year, not to forget all the other incarnations of the Dark Knight. What had me interested, though, is the notion of finally getting to see Alfred Pennyworth as the former SAS officer in his prime and the chance to see how he became entangled with the Wayne family.  Was the series a letdown or yet another success for the DC television universe?

The series was brought to life by Bruno Heller, a writer with experience in this universe since coming off from writing for Gotham.  Now, if you’re thinking you enjoyed Gotham and perhaps this is a prequel you can enjoy with the kids, let me stop you for a moment and say, this one is not for the kids.  This series embraces its adult content with its over-the-top violence and an abundance of sex, drugs, and profanity that more closely resembles a Quentin Tarantino film than a comic book series, and I love it for that. Heller pretty much writes most of the series, and because of this mostly singular voice (there are a couple other writer credits, but Heller it seems wrote 8 of the 10 episodes), it definitely succeeds in setting a clever and unique tone that somewhat blindsided me.

One of the show’s best selling points is the casting of Alfred Pennyworth, who is played by Jack Bannon. From all the numerous portrayals of Alfred over the years, it seems they are going with a younger Pennyworth from the Christopher Nolan universe that Michael Caine played.  Whether that was the intention or not, Bannon manages to exude the same screen presence a younger Michael Caine would, and that is definitely a good thing.  Bannon is a relatively an unknown fresh face to American audiences. He won me over with his portrayal by the end of the first episode, and keep in mind this is not the Alfred we’re used to seeing as a butler, but instead we get to see him as a bit of a badass.  World War 2 has ended, and Alfred is an ex-soldier who is working security at a local night club while socking away money to start up his own private security agency. The first half of the series we basically are seeing Alfred taking an assortment of odd security jobs that typically result in gunplay, street brawls, and a variety of other violence.  He has his two best friends (ex war buddies) who help him out with a variety of jobs, but it seems young Alfred is more of a one-man war machine who is gifted  in the art of violence and simply brings his friends along to keep them out of trouble.

Then there is, of course, Thomas Wayne (Ben Aldridge) and Martha Kane (Emma Paetz), the eventual parents of Bruce Wayne.  I don’t want to spoil just how they are involved or their professions, but I will say this: I was a bit reluctant at first on my thoughts of Thomas, but by the end of the season I was really enjoying these two. Despite the time period, this is a very modern story, so don’t expect Martha to be the damsel in distress.  Because of the show’s modern feel it can be a bit hard to really place down the time period; the music is the most telling.

As for the actual overall story arc of the first season, well, this was also a bit unexpected.  As the new young Queen of England is attempting to retain order over her throne, there are several radical political groups that are hoping to take aim at the crown.  I’ll admit it took me a couple episodes to follow who was affiliated with what group, and while at times the story seems to be going all over the place with who the “good guys” are, things do eventually wrap up nicely.  One of the questionable “villains” comes in the form of Bet Sykes (Paloma Faith) and her sister Peggy (Polly Walker).  These women are lovely and wonderfully insane; one of the interesting quirks involves Peggy’s unique housemates who definitely had me thinking of Pulp Fiction. The show is filled with interesting characters, and one that came out of left field was “the wickedest man in the world”, Aleister Crowley.

The first season allows us to see Alfred go through the wringer both physically and emotionally.  The season definitely ends with plenty for us to look forward to. While the show does at times aim for style over substance, it still manages to be a good time from start to finish.  Though the season manages to take place entirely in and around London, I’m excited to see this Alfred in Gotham City.

Pennyworth is presented in the aspect ratio 2.00:1.  The 1080p image is arrived at with an AVC MPEG-4 codec at an average of 29 mbps.  As you would expect from a series in the Batman universe, the show is dark and gloomy, so don’t expect a wide, robust color display.  The one negative thing I have to say about the series is how bad some of the CGI looks at times when doing wider shots displaying the size and scope of the city, because good portions of this are CGI-created, it definitely has a video-game-like appearance.  There is a good deal of saturation to the image, but it works when setting up the show’s aesthetic.  The black levels are really the highlight here, whether it’s in the dark and shadowy alleyways or simply the detail in the costumes.  It may not be the best looking show, but it fits the tone of the story they are presenting here.

The DTS HD-Master Audio 5.1 track is robust. Most importantly the dialog comes through clearly, which is important, especially with the variety of accents from the cast.  The action sequences sound great as the subs get plenty of work with the impacts and gunfire, but even the subtle stuff like the wet impacts i.e. the Gallows sequence make the scene all the more gruesome. The soundtrack that was put together for this show also sounds great.

While this is definitely a part of the Batman universe, this isn’t quite what people are used to seeing when delving in this world.  The first season shows us an Alfred who is very capable of killing people; it’ll be interesting to see how this character will evolve over time.  Season 1 does a good job at whetting the appetite for viewers to see the darkness of the Batman world come to life; I’m eager to see just how dark and vile this show’s Gotham City could be.

Brent Lorentson is a horror writer and film critic based out of Tampa, Florida. With a BA in Digital Film, he co-wrote and co-directed Scavenger Hunt. His short stories have appeared in various horror anthologies. In 2019 his short script Fertile Blood will be a part of the anthology horror film Slumber Party. He is currently working on his first novel A Dark and Secret Place set to be released in late 2019. Favorite Films: Taxi Driver, Fight Club, I Saw the Devil, The Wild Bunch, Dawn of the Dead, A Clockwork Orange, Pulp Fiction, Heathers, The Monster Squad, and High Fidelity.
Gladiator ( UHD Blu-ray) (4K) (Steelbook) Head of the Class: The Complete First Season