Posted in: No Huddle by Brent Lorentson on July 7th, 2020 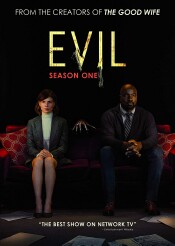 From the creators of The Good Wife comes a show that attempts to explore if demonic possessions, miracles, and other supernatural occurrences are real or simply manifestations of the mind.  This is one of those topics that have always fascinated me, being brought up Catholic and with what some might consider an unhealthy obsession with horror.  It was a no-brainer growing up that I would gravitate to The X-Files, and over the years there have been several shows attempting to capture the dynamic of the skeptical FBI Agent Dana Scully and the true believer agent on a crusade, FBI Agent Fox Mulder.  Evil just may have the potential to be the show that explores the unknown and deliver the same quality drama, though I wouldn’t say it deserves the cult hit status just yet. Dr. Kristen Bouchard (Katja Herbers) is a clinical psychologist who is typically used by the local D.A. to testify on the sanity of a subject who is on trial.  A big deal is made about her being a climber that has reached numerous summits, but nothing is really done with this aside from making it a plot device we never get to see her put into action.  Her husband is absent from a good portion of the show because he is taking time off to climb Everest, leaving behind their four daughters in the care of Kristen.  To help Kristen take care of the girls, her mom, Sheryl (Christine Lahti) steps in to play babysitter.  The family dynamic is definitely one of the strengths of the show. Just how Kristen would be able to juggle her job and the kids on her own definitely makes it easy for the viewer to root for her and makes it easier to forgive her down the road when she makes some questionable decisions, but I’m getting ahead of myself. Then there is David Acosta (Mike Colter), a former addict who has cleaned up his life and is attempting to join the priesthood.  I loved Colter’s work as Luke Cage, and he continues to maintain a presence on screen in Evil. Though he’s not a priest yet, David works for the church; his job is to basically sort out if alleged possessions and miracles are legit (at least enough for the Vatican to allow the church to be involved). David quickly recruits Kristen to join his team, which also includes Ben (Aasif Mandvi) who works as a tech advisor for the team.

The first pilot was a fun episode, but it’s not till the show gets to the fourth episode, ROSE390, where I found myself truly engaged.  The episode has the team investigating a nine-year-old boy who has some serious violent impulses. Then there is the B story that has Kristen’s daughters getting involved with a VR horror game that may have a demon inside it.  This is a network TV show, so when this episode takes some rather dark directions, one thing was made clear: no character or storyline is safe.  These sentiments are only validated in the following episode October 31. I enjoyed these episodes immensely (I really dug the nod to The Exorcist) but one thing I realized was missing is the show is completely lacking a sense of visual atmosphere.  The show is visually too slick and polished, and it takes away from its potential.  There are genuinely some creepy moments over the course of the show that could lead to some great scares, but the lack of atmosphere takes away the impact.  Perhaps bringing in directors that are more seasoned in the horror genre could help this out; injecting just a bit of atmosphere will tap into a new audience that I’m sure would love to embrace this show.

Another issue that nags at me is how the show treats its secondary characters. Characters that you would think would have some significance to the story and lives of these characters just seem to come and go without reason. Sure, I understand budgets and each episode only having a certain amount of time, but a big for-instance I’d point to is Kristen’s husband.  I won’t get in depth, but when he simply vanishes from the show, it just doesn’t make sense.  Then there is the issue with the grandmother coming and going, the Monsignor simply being replaced by a Bishop, things that should be bigger deals but are simply glossed over, then there is Prophecy Girl…(No, seriously what the heck happened with her?)  Then it’s the handling of the subject matter in the show.  It’s obvious the writers have a very skeptical outlook on the subject matter, and the skepticism kind of gets in the way of the story.  Even when it seems the show is dabbling in the supernatural, the way it’s presented is silly and difficult to take seriously.  Again this could be something fixed by adding a bit of atmosphere, but also having demons named George and Roy, well, that’s a bit cringe-inducing.  Then there is the handling of David’s character. I understand making him a flawed character makes him more interesting, but considering he’s studying to be a priest, they have him doing things that are just a bit hard to accept.

Though the show has its flaws, there is so much promising potential with this show.  The way the season ends sets up some really interesting directions this show may be heading.  I want this show to continue to grow. I’m curious to see what’s in store for these characters.  It may not be perfect, but it’s definitely entertaining.

Brent Lorentson is a horror writer and film critic based out of Tampa, Florida. With a BA in Digital Film, he co-wrote and co-directed Scavenger Hunt. His short stories have appeared in various horror anthologies. In 2019 his short script Fertile Blood will be a part of the anthology horror film Slumber Party. He is currently working on his first novel A Dark and Secret Place set to be released in late 2019. Favorite Films: Taxi Driver, Fight Club, I Saw the Devil, The Wild Bunch, Dawn of the Dead, A Clockwork Orange, Pulp Fiction, Heathers, The Monster Squad, and High Fidelity.
South Park: The Complete Twenty-Third Season (Blu-ray) Braveheart (UHD Blu-ray) (4K) Steelbook