Posted in: Disc Reviews by Gino Sassani on July 7th, 2020 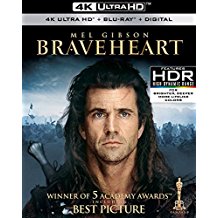 “I shall tell you of William Wallace. Historians from England will say I am a liar, but history is written by those who have hanged heroes. The king of Scotland had died without a son, and the king of England, a cruel pagan known as Edward the Longshanks, claimed the throne of Scotland for himself. Scotland’s nobles fought him, and fought each other, over the crown…”

Mel Gibson had a bit of a rollercoaster life for a while there. His DUI arrest and subsequent anti-Semitic rant caused many to look less favorably upon the man himself. He appears to be making his way back into the fold. Of course, it helps that Hollywood has bigger fish to fry now, and suddenly Gibson’s flaws don’t appear quite so damning with all the new revelations that really started with Bill Cosby but blossomed with Harvey Weinstein. Gibson’s directed films hadn’t been as accessible to the public, but last year he took the film world by storm when he released Hacksaw Ridge. It was perhaps the most meaningful World War II film since Saving Private Ryan 20 years earlier. Little by little, Gibson is coming back. He won’t win everyone over, but he’s making some headway. Still, no matter how you view Gibson or his work today, it can’t be denied that he has created one of the more compelling films of our day in Braveheart.

William Wallace (Robinson) was just a wee lad when he was introduced to the cold realities of the 13th century world in which he lives. He is witness to the aftermath of a brutal slaughter of Scotland’s prominent voices for independence. When his father sets out to avenge the acts, he is also killed. Carted off to live with his uncle, this is the last we see of young William. When we next see William, he is a man in the guise of Mel Gibson. He shuns the freedom-fighter friends of his father and has interest in only one thing, the lovely lady Mirran (McCormick). From here the story is one Gibson would almost literally relive in The Patriot. In both films the hero avoids the conflicts that surround him until the enemy forces his hand by taking a member of his family in some brutal fashion. Here it is his young wife who is nearly raped and eventually murdered. Both heroes fly off in a bloodlust rage and at first are literally one-man killing machines wreaking vengeance. Eventually both men become respected leaders in the cause of freedom. Plenty of gory battles ensue, and the hero wins the day. In The Patriot the story pretty much ends there; however, Braveheart doesn’t end where you expect it to end. The fact is that after the pivotal battle, there is an hour yet to come that will bring William betrayal from his own people and, as you must already know, things don’t end well for William, or do they?

Mel Gibson can be a phenomenal force when he brings passion to a role as he did here. His energy and drive are tiring at times to behold. Seldom has an actor immersed himself so much in a role. While Gibson has never had tremendous emotional range in his acting skills, he more than makes up for it through his actions. What his face can’t deliver, he will tell us through sheer force of will. When he gets started, it seems nothing could ever stop him from telling the story that needs be told. It doesn’t hurt at all that most of the elements of this film conspire together with Gibson to create a near masterpiece. The supporting cast is often lost in Gibson’s shadow. There’s never any chance that you can forget or lose track of whose story this is. Still, the cast is quite good. Patrick McGoohan isn’t used nearly enough as the hard King Longshanks. He is the perfect counter to Gibson and with a seemingly effortless performance. Brenden Gleeson is another underused performer, playing William’s childhood friend, and he brings a lot of heart to the table along with most of the rare comedic relief. The District’s own David O’Hara is also a very welcome element as the crazy Irish fighter who helps the Scottish so he can kill himself a few Englishmen along the way. Finally, the role of Mirran is small, but an important one. Catherine McCormick does the absolute best that she can, but the romantic angle is an awkward one, there merely to be exploited as the catalyst to William’s rage.

Braveheart is wonderfully photographed. The film makes excellent use of the stunning Scottish locations. Every moment in the film is beautifully framed with lush green fields or majestic mountains that create the perfect atmosphere. Sunlight is almost always diffused through the traditional Scottish haze, giving the picture life even in stillness. This stillness doesn’t come often, as there are plenty of epic battles. The action often comes fast and furious with nary a moment to catch your breath. The battles are incredibly realistic and leave very little to the imagination. I think horse fans will be distraught over how many horses are shown slaughtered in the famous battle. Rest assured, I’m sure no “real” horses were harmed during the film. All of this visual stimulation is accompanied by a James Horner score that manages to show its deep Celtic roots and yet remain somewhat modern and exciting.

If Braveheart suffers at all, it is in the pacing of the first 50 minutes or so. I must admit that I found myself tempted to fast-forward to the beginning of the action. I understand what is being set up here, but it could have been done with far better timing. It’s almost as if that first hour is going by in slow motion. I am a huge fan of Gladiator, which I consider a superior film to Braveheart. I do acknowledge the importance of Braveheart in an evolution that makes Gladiator possible, so there is plenty of room on my video shelves for both.

Braveheart is presented in an aspect ratio of 2.35:1. The ultra-high-definition 2160p  image is arrived at by an HEVC codec with an average bitrate of 65 mbps. The colors were intentionally muted here. That means the lush green Scotland locations aren’t so vibrant, but thanks to the new 4K release, they are deep. The same is true for blood, which I was never really satisfied with on my old Blu-ray edition. Black levels have a misty quality to them, so there isn’t a ton of shadow definition here, but it is all rather atmospheric. The detail sells the whole video presentation. The blue makeup on Gibson’s face takes on a nice realistic chalky look. It’s also textures that benefit most from this level of detail. You’ll find nice woodgrains on the shields and wonderful fibers on the costumes.

The Dolby Atmos presentation defaults to a reasonable 7.1 track. The score shines through like never before. The surround mix reminded me of the foley work I used to love in the old Hammer films I saw at drive-ins in the 60’s and 70’s. It’s the footsteps or the clanging of metal weapons. I can’t quite explain it, but if you experienced those films, you’ll understand exactly what I’m talking about here. The subs kick in wonderfully during the battles. Horses thunder across my theater and fill all of the available sound spaces. Dialog comes through just fine most of the time. There are moments in large crowds, often just before a battle, that words appear a little cut off. But there’s a lot of dynamic range here that expands from the original mix quite nicely.

There is an audio commentary with Mel Gibson, but it sounds like the same one released before. It’s nice, but Mel has a tendency to go quiet from time to time, as I imagine he’s admiring his work.

The extras are all on the second Blu-ray. The first offers the film in HD. It’s the same as the previous release but this time in the steelbook format.

A Writer’s Journey: (21:30) The discussion with writer Randall Wallace is a rather nice intimate feature. He discusses the material quite frankly. He admits to a certain “write first, research later” attitude, which makes Braveheart a nice story if not terribly accurate historically. He talks about his own family connections and of his pilgrimage to Scotland. The talk is accompanied by many stills and scenes from the film.

Braveheart – A Look Back: (1:00:23) There are three segments to this typical making-of affair that you can watch alone or all together. The three parts are A Company Of Equals, The Sound Of Laughter, and The Message Of The Film. You’ll get some rather candid comments from Gibson himself against a wealth of behind-the-camera stuff, from recording the score to the immense logistics of putting together a massive battle.

Tales Of William Wallace: (29:30) This is a biography on the real William Wallace. It plays out very much like a Discovery or Biography Channel piece.

Trailers: You get two of the film’s theatrical trailers.

Braveheart – Battlefields Of The Scottish Rebellion: This is an interactive map of the four major battles with additional material.

Braveheart Timelines: Another interactive feature that looks at the production schedule and the historical beats.

Smithfield – A Medieval Killing Field: (25:19) This feature takes a look at the place where Wallace was executed. It’s a documentary on the place and other things that have existed on that spot and what it looks like today.

Finally, Braveheart should be celebrated for not being predictable. Remember the first time you saw the film? There were several moments when the film might have ended, and the audience would have felt satisfied. As in real life, you really never know when or where the story ends. When it finally does end, it feels right, even if a bit unsettling. That’s what you remember from the first time. Of course, it is entirely possible there are those out there who have never seen the film. “We’ll have to remedy that now, won’t we?”

Gino Sassani is a member of the Southeastern Film Critic's Association (SEFCA). He is a film and television critic based in Tampa, Florida. He's also the Senior Editor here at Upcomingdiscs. Gino started reviewing films in the early 1990's as a segment of his local television show Focus. He's an award-winning recording artist for Omega Records. Gino is currently working on his 8th album Merchants & Mercenaries. Gino took over Upcomingdiscs Dec 1, 2008. He works out of a home theater he calls The Reel World. Favorite films: The Godfather, The Godfather Part II, The Body Snatcher (Val Lewton film with Karloff and Lugosi, not the pod people film), Unforgiven, Gladiator, The Lion King, Jaws, Son Of Frankenstein, The Good, The Bad And The Ugly, and Monsters, Inc.
Evil: Season 1 Star Trek: Short Treks