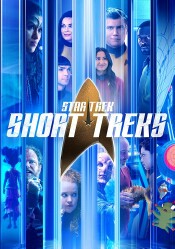 In the local newspaper here in the Tampa Bay area there has been a long-running series of articles called One Tank Trips or something of that nature. The idea is that the writer would introduce you to some natural or otherwise splendor that you could visit in a relatively short distance but which you might not even know exists in your own back yard. I can’t exactly make the connection, but that series kept intruding on my thoughts as I watched the first season of these little experimental Star Trek shorts. The idea appears to take us to places in the television universe of Star Trek to small events that we didn’t even know were going on but which might have even had a large impact on the things we did know about. The first of them were pretty much extras on the Star Trek: Discovery DVD releases and told prequel/side stories directly related to episodes of the main show. They play pretty much like the kind of release extras you might get with any home video release. Somewhere along the way someone got the idea that these side trips could go beyond the current episode supplement idea and reach across the world of Star Trek, leaving the window open for almost any era, place, or character to show up, often in some unexpected form. An idea like that has great potential, but it’s fraught with the danger of a very uneven presentation, and that’s the inherent blessing and curse you will find in this single-disc DVD release of Short Treks.

The first two are called The Brightest Star and Runaway. Both appear on the second season release and tell stories that are directly a part of second season episodes. You already have them if you have that set. Calypso is also related to Discovery, but not directly to an episode. We find ourselves far into the future, where Discovery has been abandoned in deep space. It’s likely been centuries since the ship had a crew, and the ship’s AI has evolved and now finds itself lonely. When the ship encounters an escape pod, the man inside is rescued and brought back to health. The man, Craft, played by Aldis Hodge, participated in a war and was on his way home to his wife and family. The ship AI develops a kind of relationship with Craft, but ultimately understands it must release him to return home. If the story sounds a little familiar, it means you are up on your classic literature. It’s Homer’s story of The Odyssey, where the title character tries to get home after fighting in The Trojan War, chronicled in Homer’s earlier book The Iliad. Odysseus must pass through many strange places and creatures before he finally makes his way home. It’s actually quite well done and an unexpected emotional journey that really only flirts with the Star Trek concept.

The Escape Artist was a miss for me. Rainn Wilson returns as Harry Mudd, one of the franchise’s most beloved characters. It’s a reprise from a Discovery episode, and while he tries his best, no one can replace Roger Carmel, who played the original rascal. The short attempts to fold into the I, Mudd 60’s episode and Harry’s army of androids. It’s cute, to be sure, but falls flat. The idea is that Mudd uses androids to pose as himself so that he can cash in on the various rewards on his head. I implore you guys to leave Harry alone. And he’s not the only iconic 60’s concept to be a bit abused here. The Trouble With Edward brings back the equally beloved tribbles. Here an egotistical science officer genetically alters tribbles to create the super-breeders Kirk and crew discover. That plays with all kinds of continuity. Kirk’s guys never knew anything about tribbles before, and there is way too much effort put in here to reproduce some of the 60’s episode’s iconic moments. The Deep Space Nine tribute was a lot of fun and worked. Here’s another aspect of Trek you guys need to just leave alone. I found these shorts worked much better when they struck out on their own and left canon out of it for the most part.

Q&A might be one of the best of the shorts. Part of the reason is it ventures into the Christopher Pike Enterprise, which was the strongest part of Discovery’s second season and will be a series of its own soon. Hell On Wheels star Anson Mount is wonderful in the role. It’s the best move Alex Kurtzman has made in his mission to re-write Trek. Than Peck also makes a pretty respectable Mr. Spock, and Rebecca Romijn takes over nicely for Majel Barrett’s Number One. I’m looking forward to these three in their own series. Here we chronicle Spock’s first day on the Enterprise, and he ends up stuck in a turbo lift. This is the kind of strong character stuff that I think will make Mount’s series a big hit if Kurtzman can control his desires to mess things up. Another short from that era and ship is Ask Not, which is another strong character episode with Mount’s Pike delivering a familiar test to a prospective cadet. These two episodes form the very best of the release.

Ephraim And Dot is an animated short that is quite intentionally in the style of the Looney Tunes cartoons. A space creature is accidentally brought onboard the 60’s Enterprise where it must contend with the ship’s intruder protocols. The story takes us through the Trek episodes and into the films where the ship is destroyed by Kirk in The Search For Spock. A few of these moments are reproduced with the voices from the actual series. It’s whimsical, to be sure, but plays with that timeline a bit too much for my tastes. This was traditional animation, while The Girl Who Made The Stars is a computer-animated episode about a father telling his daughter an empowering creation fable. It’s stronger than the other animated effort but tends to the preachy side. Trek was also a master of subtle social messages that were far more impactful.

Children Of Mars is just outright dull. It’s played out like a fantasy. Vulcans with too many emotional reactions and technology from the 60’s in a future Trek episode. It’s a story about two young girls who are rivals until a set of tragic circumstances changes their lives. The best part is the use of Peter Gabriel’s cover of Bowie’s Heroes.

It’s a nice little distraction while we wait for the world to heal and more Trek to be released on disc. But honestly? “If I had any money, I’d be sipping jippers on a beach somewhere!”

Gino Sassani is a member of the Southeastern Film Critic's Association (SEFCA). He is a film and television critic based in Tampa, Florida. He's also the Senior Editor here at Upcomingdiscs. Gino started reviewing films in the early 1990's as a segment of his local television show Focus. He's an award-winning recording artist for Omega Records. Gino is currently working on his 8th album Merchants & Mercenaries. Gino took over Upcomingdiscs Dec 1, 2008. He works out of a home theater he calls The Reel World. Favorite films: The Godfather, The Godfather Part II, The Body Snatcher (Val Lewton film with Karloff and Lugosi, not the pod people film), Unforgiven, Gladiator, The Lion King, Jaws, Son Of Frankenstein, The Good, The Bad And The Ugly, and Monsters, Inc.
Braveheart (UHD Blu-ray) (4K) Steelbook Trolls World Tour: Dance Party Edition (UHD Blu-ray) (4K)