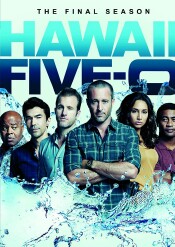 “It’s crazy the things that happen at work.”

The beginning of 2020 certainly created some crazy things everywhere in the world. A pandemic arrived and shut down productions all over the globe. Films are missing long-anticipated release dates, and most network television shows were forced to close down early to protect their casts and crews. Seasons have been called with whatever episodes were already finished. Most of those shows will continue to shoot those episodes as part of their next season when they are finally able to get back to work. That won’t be the case for Hawaii Five-O. Late in this 10th season it was decided the show would wrap it up for good.  We got 22 episodes, and they even managed to get out a series finale. If it all feels a little rushed, that’s because it was. This wasn’t the best year to have to say goodbye, and it certainly adds to the sadness for the show’s participants and fans. Now CBS is offering those final episodes before we all say aloha.

For those who have been living under a rock since the 1960’s, I’ll give you a quick rundown on what this series is about. The governor of Hawaii created a special task force that operates around the regular police department. They handle the tough cases and are given “means and immunity” from bending the law a bit in order to take on the tougher cases. The team is headed up by a former Navy Seal whose father also served in law enforcement. He’s Steve McGarrett, originally played by Jack Lord, and here played by Alex O’Loughlin. His partner is an ex-New Jersey detective named Danny Williams, another original character played once by James MacArthur and now played by Scott Caan. If you recognize the last name, that’s because he’s the son of Sonny Corleone, James Caan. If the name doesn’t give you any hints, his speech patterns are a dead giveaway. The character is also the source of the show’s famous line: “Book ’em, Danno”. The two pretty much act like a bitter married couple, and their interactions are one of the strengths of the series. They love each other but constantly argue. The chemistry between these two is priceless and alone worth the price of any season collection. Last season, however, Caan had taken a step back on the show to spend more time with his real family. He doesn’t get near as much screen time this season once again.

Steve and Danny don’t do all of this alone. Over the years new cast members have been added along the way. Chi McBride is Lou Grover. He used to be a police captain in Chicago before his family got threatened because Grover exposed some bad cops. McBride is a big guy and can be quite intimidating, but he’s a huge teddy bear inside. Fans of the old Boston Public will fondly remember him as the school’s principal. Jerry Ortega is played by Lost’s Jorge Garcia. He started the show for a few years as a recurring character who got the team mixed up in his conspiracy plots. He’s the island’s version of the Lone Gunmen of X-Files fame. He’s now the team tech and expert on lore and history. Ian Anthony Dale plays ex-mob family heir Adam Noshimuri. Adam married Kono, but of course, with her being gone, they’ve split the characters, and Adam is invited to join the team. He has contacts in the mob world on the island because his father was one of the bosses. He’s been trying to get out from under his family tradition, and now he’s on the team.

Two of the newest members of the team joined a couple of years ago when the cast controversy cost the show two of its leads. Beulah Koale is Junior Reigns. He was a Navy Seal who had lost direction in his life until Steve reached out to give him purpose on the team. He’s the young, optimistic guy and somewhat of a puppy dog. For a Seal he can be quite naive.  Meaghan Rath is the sister of Supergirl’s brainiac Jesse Rath, and plays Tani Rey. She’s also a tough cookie looking for direction and had Steve reach out to her. These two new characters are partnered, and they have found some terrifically easy chemistry. They’ve become another duo that keeps the show interesting and fresh.

The team has some folks outside of the group who usually play a part in the stories. Taylor Wiley was a UFC wrestler now turned actor. He plays Kamekona, an island business wiz who runs a shrimp company where the team like to eat. He’s the team’s number one informant. He used to be a thug and has a lot of connections in the underworld. Kimee Balmilero is the medical examiner, Dr. Noelani.  Finally, you have Dennis Chun as police Sgt. Duke Lukela. He’s the team’s main contact within the local police department.

The final season gives us the last new regular to join the task force. Steve and the team encounter Quinn Liu (pronounced Lou), played by Katrina Law while on the trail of some bad guys in the season premier. She’s a military MP who has taken it upon herself to chase the same bad guys and ends up making a lasting impression on Steve. Law spent many episodes playing Nyssa, the daughter of super bad guy Ra’s al Ghul in the DC television Arrowverse. The same episode sees us say goodbye to Jerry Ortega, played by Jorge Garcia. If this hadn’t been the last season, that would be a tough loss to take, as he added so much heart to the series. It’s obvious that the showrunners did not know they were working on the show’s final season. The Danny character was obviously being phased out so that Caan could leave the series. Quinn was just as obviously intended as his replacement as Steve’s partner. They teamed a lot this season and started to have those same kind of car-banter scenes that Steve and Danny used to have. The set-up was working a bit and might have been an interesting direction for the show. But it wasn’t until near the end of the season that CBS made the decision to axe the series. It appeared to have taken the cast and crew by surprise, but it happened with enough time left in the season to film a relatively good series finale.

The season also managed to close a few of those loose threads along the way. Steve gets closure with both his mother and the case that his father set him upon back in the pilot 10 years ago. Adam gets to resolve his ties with the mob that his family was so much a big part of when he was growing up. It’s a pretty intense arc that brings that character pretty much full circle. Junior gets to finally resolve the issues with his own father and gets closure on his sister’s death. Lou gets a new family member that comes with her own special kind of drama that allows McBride to pick up the slack as the emotional center of the final season.  Fans will be frustrated with the rather sudden decision to call it quits, but there’s enough here for fans to get some closure, as well.

You get all 22 episodes on five discs with a few deleted scenes. Other extras include the standard season summery, a gag reel, and an interview with Alex O’Loughlin.

There’s a crossover episode with the new Magnum P.I., and give CBS a ton of credit here for including both episodes. That allows you to watch the entire story without having to buy both sets. The crossover also sets up the future of this franchise, as it appears that some of the characters will show up from time to time on Magnum. It’s really a case of history repeating itself almost exactly. The original series ended its 12-year run in 1980, but CBS still had an extensive production crew and facilities in Hawaii. The original Magnum P.I. was created to take advantage of those resources. The show took over the production crew and carried on for another eight years in the same time slot as the original Hawaii Five-O. I don’t know how long Magnum will run, and this version of Hawaii Five-O ran two seasons shorter than the original. But Magnum is now taking over the production resources from the departing show just like they did in 1980. Most of the 2019/20 season was cut short by the COVID 19 virus. I’m not sure if any episodes were left unfilmed, and I suspect there were some, but the season was called and whatever untold adventures there might have been scheduled won’t happen. I was skeptical when this series began a trend at CBS to bring back vintage titles. Some have gone well … others not so much, but Hawaii Five-O was the best of them, and I can promise you this: “You’re going to miss this thing.”

Gino Sassani is a member of the Southeastern Film Critic's Association (SEFCA). He is a film and television critic based in Tampa, Florida. He's also the Senior Editor here at Upcomingdiscs. Gino started reviewing films in the early 1990's as a segment of his local television show Focus. He's an award-winning recording artist for Omega Records. Gino is currently working on his 8th album Merchants & Mercenaries. Gino took over Upcomingdiscs Dec 1, 2008. He works out of a home theater he calls The Reel World. Favorite films: The Godfather, The Godfather Part II, The Body Snatcher (Val Lewton film with Karloff and Lugosi, not the pod people film), Unforgiven, Gladiator, The Lion King, Jaws, Son Of Frankenstein, The Good, The Bad And The Ugly, and Monsters, Inc.
James Cameron’s Story of Science Fiction (Blu-ray) NCIS: The Seventeenth Season