Posted in: No Huddle Reviews by Gino Sassani on August 1st, 2020 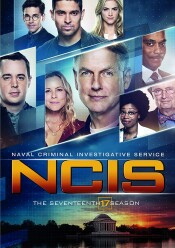 “You like when I do the whole cryptic thing.”

The 17th season of NCIS certainly ended with just that kind of vibe. The showrunners did a great job of keeping secret that Ziva would show up in the very last frame of the season. Everyone was sure she was dead, and while that’s often no reason not to bring back a character in the fantasy genre, it doesn’t often work in something like this. It brings up a lot of questions that were not going to be answered for several months. How is she still alive? Why is she here? Is she now a good guy or a bad guy? I’m sure you spent the summer with plenty of questions that didn’t get answered for a long time. But it’s finally aired, and now the whole story is out for home video as CBS releases the 17th season of NCIS. The team has changed faces over the years. Few of the original members remain, but as long as Mark Harmon remains in the starring role of Gibbs, there’s life in this show yet. This season sees no real change in the characters of the show, but it does allow for even more growth for those still on the train. NCIS is about to enter into its 18th season in just a short time. That in itself is a remarkable accomplishment in the days of short attention spans and hundreds of shows to keep that attention. What is more remarkable is that it continues to be the number one drama in the world. What could a series possibly have left to say after 15 years? Apparently, the answer to that question is: a lot. One of the reasons the series has stayed so strong for so long is the cast. And while it has changed considerably over that time, new members are brought in who always seem to fit into that comfortable family that makes up the appeal of the series. This show has become like that ragged, threadbare shirt that you can’t quite part with. That sentiment completely comes alive with that long-anticipated arrival of Ziva, played once again by Cote de Pablo. We got that surprising entrance just as last season ended and Ziva shows up in Gibbs’ basement. Her new story kicks into high gear as she explains that Gibbs is in danger, and before we really get that reunion we longed for, they are under fire and running for their lives. The three episodes that feature Ziva are pretty much there to give the character a more proper send-off, and it attempts to close her story off with Tony without us seeing Tony in anything but flashbacks. Of course Michael Weatherly is busy with his own show, and if you were hoping for a cameo, that wasn’t going to happen. The episodes were some of the highest-rated episodes of any television last year and helped considerably to keep the original NCIS on top all over the world. They are touching episodes, and I think they demonstrated this point of the new characters always being so perfectly chosen to retain the family atmosphere. This episode gives you plenty of moments to reflect on those changes and actually see the past meet the present, and it combines so well. I think you could bring back any of the previous cast and the show would be pretty much the same at its core. That’s the secret of the show’s longevity.

After all of these years, it’s hard to believe that Mark Harmon’s Gibbs could still have anything new to show us. Yet each year the writers come up with some twist in his life that truly does show us another part of this complicated man. This year Gibbs befriends a young neighborhood boy who is in desperate need of some kind of father figure. Of course, fans of the show know that’s what he does best, but with his team. Gibbs takes the kid under his wings and pours a lot into the role. Of course, it’ll come back to bite him in the behind. You know there’s always something else going on here. It’s one of the most emotional moments in the entire series.

Jimmy, played by Brian Dietzen, continues to grow to the point that he’s looking for his own assistant now. We find out that he’s afraid of pigs in this episode. He ends up sharing the better chemistry with newcomer Diona Reasonover as the newest lab tech Kasie. He gets far more screen time with her than the others. She’s also growing into the role and now has far more confidence and energy. Of course, David McCallum remains as Dr. Ducky Mallard, but he has pulled back his appearances. When he’s there, he’s still contributing great stuff. The 88-year old actor might be slowing down, but he’s not out for the count by any measure. It’s quite a testament to the series that he wants to still be there instead of enjoying a well-earned retirement.

Wilmer Valderrama gets some good stuff for Torres this season. They are really starting to push his relationship with Ellie Bishop, played by Emily Wickersham, this season. All of that usually wouldn’t interest me a lot. I think these romance angles often take away from a show’s focus, and NCIS has done a good job of using them in more subtle ways to develop the characters with less about the bedroom. That allows for potent episodes like On Fire. A speeding car hits Torres while taking a morning run with Bishop. He ends up in a coma after pushing Bishop out of the way, and Wickersham gets to pour on the anger and emotions while they try to track down the who and why of the event. It’s her strongest performance yet on the show. This is how you make those kinds of relationships compelling.

Sloan, played by Maria Bello, made contact with the daughter she gave up for adoption years ago. We knew there was a story there, and it sure comes out this season. We learn some interesting and powerful things about her past, and it fills in that story we’ve gotten since she joined the show that she had history with Vance and Gibbs.

Finally, Rocky Carroll has his hands full, not only playing Vance but directing several episodes. He’s become one of the go-to directors of the series, and I suspect that might be the path he follows more exclusively once his time on the show ends. The franchise will surely remain even after this one goes away, and that will likely be enough to keep him busy for another decade or so.

There are only 20 episodes this year. More were written, but we all know how last season’s shows ended their years. The COVID-19 pandemic shut down production, and for returning shows like NCIS, those episodes have been pushed to next season. For some shows that might have meant some awkward finishes, but not here. It actually might have worked out for the best, at least in regards to how the run ended. I don’t know what was planned for those final episodes, but I doubt any of it could have been stronger than how the 17th season did close. The Arizona was one of those truly special episodes. Christopher Lloyd plays a man who robs an admiral just to get the attention of NCIS. He claims to have served on the Arizona, one of the ships sunk in the attack on Pearl Harbor on Dec 7th 1941. He enlisted under a brother’s name so needs to prove it before he dies of a heart condition that is about to overtake him. Members of the Arizona crew have a right to be laid to rest on the sunken ship with their shipmates, so he tasks Gibbs with proving it so he can be returned to the ship. Lloyd delivers a passionate performance and delivers a monolog that rivals that of Robert Shaw’s Quint in Jaws. He is finally pushed by Gibbs to describe the attack, and his telling is chilling. He deserves an Emmy for the performance. Of course, there’s also a wonderful Taxi homage in the episode.

Another special episode is Ephemera, which has the team looking through old letters from 1973 to piece together a mystery. As they read love letters, we get flashbacks to that time and the show’s cast’s take on the roles of the key players in that drama. It’s not the first time that’s been done, not by a  long shot, but it is always nice to see the cast get to spread out into something else yet still play off their chemistry together. I’m sure it’s a lot of fun for this or any long-running cast.

You get 20 episodes on five discs. There is an extra feature on both the Ephemera and Arizona episodes. You get some deleted scenes, the usual season wrap-up, and a feature on the return of Ziva.

Every year at this time, I end up having to binge-watch a ton of television. A lot of previous seasons get released on disc in anticipation of the new seasons about to get underway. It’s a daunting task that often makes me feel a little silly when I complain to friends that I have to watch so much television.  You kind of have to get yourself on a roll and immerse yourselves in these fictional television worlds. More and more I find so much of my time is taken by the NCIS franchise, which has just completed 30 seasons of episodes and is about to rack up three more very soon. Add that to the fact that this has been going on for the better part of the last decade, and NCIS has accounted for a fair amount of my waking hours. And while it does appear that the L.A. version of the show might be pulling up to its final destination, the New Orleans show is just getting its legs and looks to be here for the better part of the next decade. But it’s the mothership, originally spun off from JAG, that has just completed its 17th season with no signs of slowing down. Sometimes it feels just like a runaway train. The cast has changed over almost completely since that first season, with only a handful of actors and characters still on board. But wherever this train stops, and whoever happens to be on board at various stretches of the journey, I don’t see us getting to a station anytime soon. And if Season 17 is any indication of what’s yet to come, I’ve got my ticket in my hand, ready for the ride to continue. “Let’s go.”

Gino Sassani is a member of the Southeastern Film Critic's Association (SEFCA). He is a film and television critic based in Tampa, Florida. He's also the Senior Editor here at Upcomingdiscs. Gino started reviewing films in the early 1990's as a segment of his local television show Focus. He's an award-winning recording artist for Omega Records. Gino is currently working on his 8th album Merchants & Mercenaries. Gino took over Upcomingdiscs Dec 1, 2008. He works out of a home theater he calls The Reel World. Favorite films: The Godfather, The Godfather Part II, The Body Snatcher (Val Lewton film with Karloff and Lugosi, not the pod people film), Unforgiven, Gladiator, The Lion King, Jaws, Son Of Frankenstein, The Good, The Bad And The Ugly, and Monsters, Inc.
Hawaii Five-O (2010): The Final Season Tom Clancy’s Jack Ryan – Season Two (Blu-ray)