Posted in: Disc Reviews by Brent Lorentson on July 28th, 2020 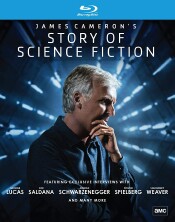 James Cameron is easily one of the most recognizable names in the Hollywood industry. Every time he makes a movie, it manages to break box office records.  As many of us have been waiting patiently for his sequel to Avatar, it seems he was busy working on a small project that takes an intimate look into science fiction.  This isn’t a boring history lesson, though; instead he’s gathered some of the biggest actors and directors of the genre and has a discussion about the various ideas that science fiction presents its viewers and readers. Whether you’re a science fiction novice or a self-proclaimed expert in the field, there’s at least something for everyone in this six-part, four-hour-plus series. The series is broken up into six episodes. Each episode covers a specific theme in the science fiction genre, so it allows you to watch it in any order you’d like. For me, I have to be honest; it’s hard to be impartial and not let my inner geek get excited over this series.  When you have James Cameron and Steven Spielberg discussing how Close Encounters of the Third Kind came to be or see Cameron and Christopher Nolan discuss time travel, this is some engaging material.  The closest thing I’ve seen recently where we get to see talented filmmakers sit down and talk is The Director’s Chair that Robert Rodriguez hosts, but what makes Story of Science Fiction stand out is seeing these filmmakers express their appreciation of the genre and what inspired them.

The series as I mentioned is broken up into six episodes on two discs:

It’s hard for me to even pick a favorite episode because of the way the episodes are presented, and how numerous movies, TV shows, and books are discussed in each episode.  Getting to see James Cameron and George Lucas discussing Star Wars and Stanley Kubrick’s 2001: Space Odyssey is something many of us wish we could have been a fly on the set for.  Because of how interesting I feel these conversations could have been, it’s a little frustrating when the episodes then start including film critics and other “experts” in the genre. I’m not intending to discredit these people; it’s just that the appeal is the A-list star power in the show. Was there really not enough footage to fill a 44-minute episode?  Aside from the big-name directors being interviewed, there are several big name actors: Keanu Reeves, Arnold Schwarzenegger, Sigourney Weaver, Will Smith, and many others.

The Time Travel episode is fun considering it has some interesting anecdotes from Back to the Future, Interstellar, and surprisingly, Bill and Ted’s Excellent Adventure.  A good portion of this episode is about the paradox of time travel, and it’s an episode that just simply ends too quickly, as again it is filled with conversations we see these filmmakers having that many of us have had amongst our friends, and that’s part of what makes this show so relatable, because we’re seeing these icons of the genre just enjoy having these fun conversations.

Dark Futures is the episode that seems the most relevant despite this being released in 2018.  There is a lot of discussion on the relevance of Orwell’s 1984 and how it’s continued to impact society.  While I understand that many of the classic science fiction writers are dead, I did notice how many artists in the genre seemed to be missing. Andy Weir, who wrote The Martian, is the only author who seemed to get some quality screen time.  If  Cameron were to go on and do another batch of episodes, I feel an episode just focusing on science fiction writers and artists and their influence would be great.  A valid point is made in the series where a director mentions how films are the new books of the generation. While I somewhat agree with this, I do like where the conversation goes from there. It’s these insights that elevate this show from simply being a show where filmmakers pat each other on the back.

If you’re still on the fence about checking this out, let me just point out we get to see James Cameron and Ridley Scott discuss the Alien films … I would have been in geek heaven to have been in the room for this; then later in the series they eventually discuss Blade Runner. Like I said, it’s hard for me to be impartial when you’re getting to watch your cinematic heroes discuss your favorite films.

Aside from wishing more time was spent with the directors, a person who seems to be missing from the discussion is Denis Villeneuve, considering his film Arrival plays a part in one of the episodes, and he directed Blade Runner 2049 and the upcoming Dune films. Perhaps it was about scheduling, but it’s difficult to not notice his absence.  I can nitpick and say I wish there was so much more, but when I sit back and look at what James Cameron put together, I appreciate what he’s given us.  Only someone with his status could put together this kind of talent for this kind of production, and because of that I’m happy with what we got, especially at a time when it seems we are losing so many talented filmmakers and artists, and it leads to the question: who will be next to fill the shoes of the cinematic legends who have paved the way and delivered these cinematic marvels?

Story of Science Fiction is presented in the aspect ratio 1.78:1.  The 1080p image is arrived at with an AVC MPEG-4 codec at an average of 28 mbps.  This mostly consists of interviews, but the interview subjects remain sharp throughout.  The only complaint I really have with this is that some of the footage they use from films and television seem to be from a variety of source material, and not all of it has been re-mastered, so at times it has a poor quality.

The DTS HD-Master Audio 2.0 track is appropriate for this release. It’s nothing but interviews, so there is obviously no need for all the audio bells and whistles.  The audio comes through clean.

Extended Interviews: Mostly this consists of a question or a thought the interview subject had that just got removed from the episode.

If you love science fiction or call yourself a film geek, this is definitely worth checking out.  Sitting down and watching this will just make you want to delve into your film collection and revisit many of these films.  This has been one of the more entertaining discs I’ve gotten to check out. I wish so badly I could have injected myself in these conversations and asked questions.  This is a fun fanboy experience that shows even the creators we look up to are fanboys themselves.

Brent Lorentson is a horror writer and film critic based out of Tampa, Florida. With a BA in Digital Film, he co-wrote and co-directed Scavenger Hunt. His short stories have appeared in various horror anthologies. In 2019 his short script Fertile Blood will be a part of the anthology horror film Slumber Party. He is currently working on his first novel A Dark and Secret Place set to be released in late 2019. Favorite Films: Taxi Driver, Fight Club, I Saw the Devil, The Wild Bunch, Dawn of the Dead, A Clockwork Orange, Pulp Fiction, Heathers, The Monster Squad, and High Fidelity.
Africa Screams (Blu-Ray) Hawaii Five-O (2010): The Final Season