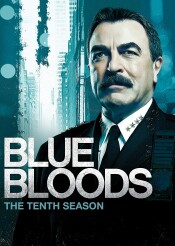 “It’s a family show with cops, not a cop show with a family.”

For ten years Blue Bloods has been a staple on CBS, giving Tom Selleck a chance to completely redefine his television career. The once cocky and carefree Magnum P.I. now has established himself as the wise patriarch. It’s a transition that a 1970’s audience would never have bought. But now he’s become a new kind of airwaves icon. The show has also managed to make it through a decade with very little change in the cast, and most of that coming from additions. This season is no exception, as we discover there’s been a long-lost member of the Reagan family out there for many years. But there are big changes coming to Blue Bloods. In the real world the police have been villainized by some, and it’s becoming an increasingly tougher job to do. For a family so steeped in law enforcement, the show will absolutely have to address these new realities. The second of course is the arrival of a pandemic the likes of which this country or the world has never seen. Productions were shut down and are now only beginning to ramp back up. But the outside world has changed, and it will be interesting, to say the least, to see how this cop family will reflect and respond to these new circumstances. So this is your last chance to see the Reagans like they were before everything changed. The 10th season will mark the end of a different phase of cop show, and you can have it in your own video library. CBS delivers the 10th season of Blue Bloods on DVD, and things will never be the same again for the Reagans or for us.

Each week there is the traditional case-of-the-week format. The cases get played out pretty much the way a normal cop show might play, and then there is the family dynamic. Cases may cause friction and stress between the family members. Here is where the performances and strong characters make this a very different show from the rest of the police dramas out there. There’s just enough of the mythology arc to keep things interesting. The stories are usually standalone, and you will enjoy this slightly different take on the cop show. Each episode has the family sitting down to Sunday dinner together. These extended family gatherings are the heart and soul of the series. This is where the family dynamics come together and we see the issues of that episode not from the perspective of a police or district attorney’s office, but through the lens of a close family. This is really where things are worked out, and the scenes have become the identifying element on the show. There’s a little piece of us that wants to be sharing in those meals and discussions. More than anything else, I think it’s one of the things that keep fans coming back week after week to take our honorary seat around the Reagan table.

The season begins with a milestone. It’s the show’s 200th episode. Eddie (Estes) and Eddie (Ray) are adjusting to married life and the dynamic between their police partnership and their family partnership. Some of the greatest challenges to the family dynamic are Frank (Selleck) who is the Police Commissioner and daughter Erin (Moynahan) who runs the D.A.’s office. That tension comes to a head when Frank learns that Erin’s office has compiled a list of unreliable cops to avoid having to depend on them in court. She’s also put in the tough position of having to explain to Jamie why she didn’t prosecute the guy who shot at him. The excessive force issue has certainly figured in the show’s episodes throughout its decade run, and this season is no exception. Frank finds himself trying to defend a cop accused of excessive force this season, and there are dramatic consequences. Public mistreatment of cops actually puts Frank and Jamie at odds when officers are assaulted by the public. There is an episode where anti-cop people vandalize cop cars and accusations from undercover cops of police brutality. Blue Bloods was taking on this issue long before George Floyd’s death.  And this season will absolutely serve as a snapshot of sorts to that moment just before everything got out of control. The season’s unintended finale might end up being a pretty good place to start. A DNA result uncovers an unknown relative out there as Will Hochman joins the season’s final family dinner and meets the family he never knew. Of course, the family is meeting a relative they never knew. It looks like there’s more to the story, and I expect little Joe will be returning in the fall.

You get all 19 episodes on just four discs. There are some deleted scenes and a feature on the 200th episode. The real sweet bonus is a gathering of the show’s family. Because of COVID they did not gather in person, but over a huge conference video call. It’s nice to put the faces against their real-life backgrounds as Donnie Wahlberg acts as the host for the event. A lot of the discussion is what they are doing during the lockdowns and expressing a lot of anticipation for getting back together. It would have been nice for the gathering to have been around the traditional table, but we all know “That’s unworkable, son.”

Gino Sassani is a member of the Southeastern Film Critic's Association (SEFCA). He is a film and television critic based in Tampa, Florida. He's also the Senior Editor here at Upcomingdiscs. Gino started reviewing films in the early 1990's as a segment of his local television show Focus. He's an award-winning recording artist for Omega Records. Gino is currently working on his 8th album Merchants & Mercenaries. Gino took over Upcomingdiscs Dec 1, 2008. He works out of a home theater he calls The Reel World. Favorite films: The Godfather, The Godfather Part II, The Body Snatcher (Val Lewton film with Karloff and Lugosi, not the pod people film), Unforgiven, Gladiator, The Lion King, Jaws, Son Of Frankenstein, The Good, The Bad And The Ugly, and Monsters, Inc.
NCIS: New Orleans: The Sixth Season The Wretched (Blu-ray)