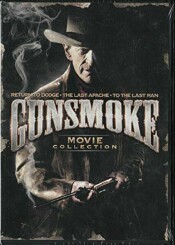 “I was wonderin’ if you were going to come to say goodbye.”

The world said goodbye to Gunsmoke in 1975 after 635 episodes and 20 seasons. But it wasn’t to be quite forever. While most of the cast would never again don the characters that made up the show’s iconic ensemble, James Arness would show up for three films that would carry his story forward. Now that CBS has already released the series in individual sets as well as an impressive full series box that delivers all 635 of those episodes, there remained just one more task to perform in order to make the collection complete. There were three television movies released between 1987 and 1992. Arness would be the only star to return for all three. Deaths and other commitments made a true collection of reunion films impossible. Even Amanda Blake as Miss Kitty would return only for the first film before becoming deceased. Two of the prominent returns were characters who were basically part of a single episode or actors who played other parts along the way. But the center of gravity for Gunsmoke has always been Marshall Dillon, and these films certainly do not disappoint on that front.

The setting for Gunsmoke was the by-now-famous Dodge City, circa 1870’s. Phrases like “get out of Dodge” would enter the popular lexicon as a result of this resilient series. Marshall Dillon (Arness) was charged with keeping the peace in Dodge City. The only other character to see the entire 20-year run was kindly Doc Adams (Stone). Star Trek’s own Doc, Leonard McCoy, took many of his traits from Doc Adams. He was the humanitarian of the city, always looking to help someone. Like McCoy, he had a taste for bourbon and a soft heart underneath a rather gruff exterior and was always ready with free advice. Dillon’s love interest throughout most of the series was Miss Kitty Russell (Blake). While there were certainly a few romantic undercurrents, the romance never came to fruition. Miss Kitty was a prostitute on the radio and was likely one here as well, but CBS chose to underplay that aspect of her character as a “saloon girl”. Finally Dillon’s faithful sidekick deputy was Chester (Weaver). Chester often found himself in trouble and was the naïve son figure to Dillon. And only Miss Kitty would be a part of this movie collection.

Gunsmoke was the longest-running scripted live-action television show in history until just this year when Law & Order Special Victims Unit started their 21st season. The series ran from 1955 to 1975. It still has the most episodes of any live-action scripted shows in history with 635 compared to SVU‘s 480. You have to understand that in the show’s earlier years a series would roll out 35-40 episodes a year compared to a network average of 20 in 2019. A great number of shows air considerably less episodes in a season. At first it was a half-hour black-and-white show that evolved into a color hour by 1967. It actually started before the days of television, premiering on radio in 1952. Then it was William Conrad as the tough-as-nails Marshall Matt Dillon. When television came into its own, Gunsmoke made the jump to the bright living room box and made history. Westerns would ride across our small square screens for the next three decades, making it the most successful genre of that time, and it was Gunsmoke that started it all. The television version of Gunsmoke was originally conceived as a vehicle for John Wayne, who opted to remain in movies. Yet it was Wayne himself who suggested James Arness, and it turned out to be a career for the one-time “carrot” monster from The Thing. Gunsmoke started before all of the big westerns and was around when most of them had departed. Here are the three movies:

This film actually serves as a direct sequel to 14th season episode called Mannon, which stared Steve Forrest as a quick draw who terrorizes Dodge City. He shoots and injures Festus and tries to have his way with Kitty. Of course Dillon put him in his place, and now 18 years later Will Mannon is released and looking for revenge. Steve Forrest reprises the role of the outlaw while Arness returns as Dillon and Amanda Blake returns for the last time as Miss Kitty. In small roles, Buck Taylor reprises Newly and Fran Ryan reprises Hannah, where she only appeared in six episodes.

The plot was a very common theme for the show. There was always someone breaking out or getting out of prison and looking for payback against Dillon. If it wasn’t for prison, it was for killing a family member or friend. Revenge was pretty much the number one plot device on the show, so it makes a lot of sense here and nicely calls back to an earlier episode.

This was another direct sequel from a series episode. Michael Learned appeared twice on the original show in two very different characters. But it was in Matt’s Love Story as Mike Yardner that this film follows up on. It was an early episode of the 19th season that finds Dillon shot and seeking shelter to recover with the help of a young widow, Mike. Dillon has lost his memory. During his time recovering there was a bond developing between the characters, and now it’s back again. With Amanda Blake deceased it was a pretty solid idea to play on another romance for Dillon. Dillon learns he has a daughter from that encounter. And now a renegade Apache named Wolf (Lara) has kidnapped her. It’s another big staple plot from the series. Just about everyone in the cast has been taken captive at some point or another. For Dillon’s newfound daughter it’s nothing more than a proper welcome to the family. To add to the connection to the series episode, clips from that episode are woven into the narrative.

Writer Earl W. Wallace wrote seven episodes of the original series, while director Charles Correll was a newcomer to the franchise. Still the connection remains strong by the use of the clips from what was indeed one of the show’s most emotionally compelling episodes.

This is the last of the films on this release but is not the last of the Gunsmoke television films with James Arness. There would be two more that are, for some reason or another, unavailable here.

This one doesn’t connect to a previous episode and stars no other Gunsmoke actor in characters they played on the show. Pat Hingle played on several episodes as another character. Here he plays Colonel Tucker, a brutal character. Dillon comes out of retirement to deal with a band of masked vigilantes and some cattle rustlers. The setting isn’t Dodge City this time. The story takes Dillon on the trail to Arizona. The band of bad guys gets Matt’s attention when they kill one of his friends. By now Arness is showing his age, and the action scenes just don’t deliver like they used to. This one stands up strictly for its nostalgic value and for little else.

Director Jerry Jameson never worked on the series but directed four films of Gunsmoke and Bonanza. The writer is once again Earl W. Wallace.

You can catch our reviews for the various seasons by banging it here: Gunsmoke Reviews.

The final episode took the cast by surprise. James Arness was convinced the show would run at least a couple more years. But it did end after the 20th season. And now CBS has gathered those three Gunsmoke films together on three DVD’s, and your collection can now be complete…. Unless you are looking for those radio broadcasts or the two remaining television films. I suspect they will also be coming. CBS gives you a fresh disc for each film, so there’s less compression issues. I’ve gotten to see a lot of Gunsmoke over the years: 635 episodes and now three movies, and there’s still a little more to come. “C’mon Warden. I ain’t hardly warmed up.”

Gino Sassani is a member of the Southeastern Film Critic's Association (SEFCA). He is a film and television critic based in Tampa, Florida. He's also the Senior Editor here at Upcomingdiscs. Gino started reviewing films in the early 1990's as a segment of his local television show Focus. He's an award-winning recording artist for Omega Records. Gino is currently working on his 8th album Merchants & Mercenaries. Gino took over Upcomingdiscs Dec 1, 2008. He works out of a home theater he calls The Reel World. Favorite films: The Godfather, The Godfather Part II, The Body Snatcher (Val Lewton film with Karloff and Lugosi, not the pod people film), Unforgiven, Gladiator, The Lion King, Jaws, Son Of Frankenstein, The Good, The Bad And The Ugly, and Monsters, Inc.
SEAL Team: Season Three Beetlejuice (UHD Blu-ray) (4K)