Posted in: No Huddle by Gino Sassani on October 2nd, 2020 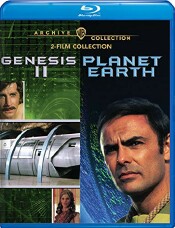 “My name is Dylan Hunt. My story begins the day on which I died. My last look at my world was to be from inside a pressure chamber at NASA’s underground laboratory at Carlsbad Caverns. Our goal was the development of a form of suspended animation which would allow our astronauts to make longer voyages through our solar system. It had been my decision that our method was ready to test on a human so, it seemed that any risks should be mine…”

Gene Roddenberry was riding high as Star Trek began to grow more in popularity during syndication than it had as a prime-time network series. Suddenly television executives wanted more ideas from the Great Bird of the Galaxy, as Trek fans began to know him. One of those ideas was Genesis II. It tells the story of a scientist who is conducting a suspended animation experiment. He expects to be under for only a few days, but a cave-in traps him in his chamber, and he is not rediscovered for 154 years. He awakes to find an entirely different world than the one he remembers. Humans live underground as a group called the PAX. They are a peaceful sort and have left behind most of the science that destroyed the world Hunt knew. Their enemies are a group of mutants, identifiable by having two belly buttons because they have two hearts. They have enslaved humans and live an aristocratic life in the city of Tyranus. Now Hunt (Cord) is being courted by both civilizations. He must choose between them. Attempting to win him over to the Tyranians is Lyra-a (Hartley). She seduces him and tries to taint his opinion of the PAX. But Hunt soon learns from experience which side is the nobler race.

Roddenberry followers will notice something peculiar about that opening monolog. The name Dylan Hunt has since belonged to the Kevin Sorbo character in the 5-year syndication series Andromeda. Indeed, this is in many ways the same character. When Andromeda was created, it used parts of more than one of Roddenberry’s ideas to form the basis, or mythology, of the show. Like Sorbo’s Hunt, this Dylan Hunt awoke from suspended animation. There are other similarities, and Dylan Hunt would be resurrected a second time before Andromeda. Another pilot called Planet Earth would star John Saxon as Dylan Hunt. This time he has slept for over 200 years, and the PAX have new enemies that look a lot like the modern-era Klingons. Finally, Hunt was resurrected successfully and spent five years in the High Guard of Andromeda. Another little bit of connection between the two shows is a weapon the Tyranians use called a stim. It bears some resemblance to Sorbo’s force lance.

Roddenberry used many of his Star Trek connections and designs for this proposed series. Stars Mariette Hartley, Ted Cassidy, Percy Rodrigues, and wife Majel Barrett were all part of the original Trek series. The costume designs are very reminiscent of that show as well. They should, as they were also designed by the same man, William Ware Theiss. Even the old turbolifts make an appearance in this pilot. One of the problems here is that Alex Cord never really appears to be comfortable in the role. There is no chemistry with any of these characters. It’s a novelty and little more. It’s a part of Roddenberry history, so it’s a part of Trek history, I suppose. The footage looks worn, but it beats the bootleg copies that have been making the convention circuit for the last 35 years.

Planet Earth would be a follow-up to the pilot, but it never went to series. This time John Saxon played Hunt, and this time he has an exploration team. They have to find a missing doctor in time to save the life of a heart patient. He ends up a slave in an Amazon-like society where men are drugged and enslaved. It all plays out as the series would have but was never given the chance.

Genesis II/Planet Earth is a pretty good example of what the archive program from Warner is all about. A good copy has been an elusive find for fans all these many years. And while this isn’t very compelling television, it has a certain charm and historical significance that is no longer merely sealed in a studio vault somewhere. So, to Warner, I say, “Thanks for letting me watch.”

Gino Sassani is a member of the Southeastern Film Critic's Association (SEFCA). He is a film and television critic based in Tampa, Florida. He's also the Senior Editor here at Upcomingdiscs. Gino started reviewing films in the early 1990's as a segment of his local television show Focus. He's an award-winning recording artist for Omega Records. Gino is currently working on his 8th album Merchants & Mercenaries. Gino took over Upcomingdiscs Dec 1, 2008. He works out of a home theater he calls The Reel World. Favorite films: The Godfather, The Godfather Part II, The Body Snatcher (Val Lewton film with Karloff and Lugosi, not the pod people film), Unforgiven, Gladiator, The Lion King, Jaws, Son Of Frankenstein, The Good, The Bad And The Ugly, and Monsters, Inc.
Most Wanted (Blu-ray) Mom: The Complete Seventh Season