Posted in: No Huddle by Jeremy Butler on October 3rd, 2020 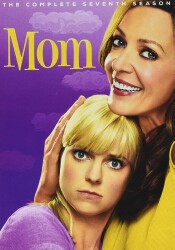 The release of this disc comes a bittersweet time, as a prominent member of the cast announced that she was leaving the show. That’s right, Anna Faris announced that Season 7 would be her final one with the series. Such an announcement of the loss of a pivotal character normally serves as the kiss of death for a series. Had this decision came a few years earlier, it most likely would have been the end of the show. However, the show went through a transition a few years back, and Faris’ central role was shared among the rest of the cast, which includes Allison Janney, Jaime Pressly, Kirsten Johnston, and Mimi Kennedy. The decision for the show to continue has been made, but after watching this latest season, it is hard to imagine that the show will continue past its upcoming season. Even with her role reduced slightly, Faris remained an integral part of the show, and though Chuck Lorre is no stranger to trying to keep a show going following the exit of a cast member (i.e. Two and a Half Men), Faris’ absence is guaranteed to be noticed.

In regards to Season 7, I was at a bit of a disadvantage, having only seen clips of previous season episodes. I did my diligence, though. The show follows Christy Plunkett, a mother of two, who after a lifetime of battling drug and alcohol addiction is on the path to sobriety. Her mother, Bonnie (Janney), also a recovering addict, is a source of frustration in her life. By the time Season 7 rolls around, her children are no longer with her, and she has basically been relegated to the daughter role, living with her mom and her new husband, played by William Fichtner. This felt like a step back for the character in my opinion, a bit of a diminishment from all the progress of the previous season. Though during Season 7 she was working towards her goal of becoming a lawyer, both her professional and personal life are used to beat down the character for the sake of amusement. The use of this trope is akin to how in the latter season of Friends, Matt LeBlanc’s character felt dumbed down. Here we are with a character whose sole purpose was to better herself, and she is being shown to be a constant screw-up and desperate for love.

It isn’t hard to draw parallels between Christy and Alan Harper (another character creation of Lorre), as both share the same curse: unable to get ahead without some type of trouble. While this idea sustained the Harper character, it did very little for Christy as far as I’m concerned. There appeared to be hope in one episode when she met a cute guy whose car she accidently hit, but it was ruined in the very same episode by a déjà vu effect. If I’m completely honest, I understand Faris’ need to move on, as her character appears to be stunted with no hope of further development.

In a complete opposite of the Christy, the character of Bonnie has thrived on the show. This season saw her celebrating her marriage and maintaining a structured routine, as well as serving as a role model for another person in the AA program. The focus of the show also seems to have shifted to the Bonnie character, as her perspective is featured more prominently than any other cast members. Janney is darling in the role and has great comedic timing.

The show also has some emotional context. In the past, it has dealt with situations involving relapse, domestic violence, and teenage pregnancy. This season the theme was family, with a story arc involving Johnston’s character where she discovers a long lost relative, only to learn that family isn’t always all that it cracked up to be. This arc is a bit heart-wrenching, but I must applaud the show’s ability to balance humorous and dark themes. On the back of this heartbreak, another lesson is also taught: that blood doesn’t make family.

While this may not be a show for the whole family, I would categorize it as a couples’ show. My wife absolutely loved it and is now trying to find a previous season so that she can catch up on what she missed. That was a bonus; despite coming into the series at Season 7, it didn’t feel too detrimental to watching the show. The premise is very easy to understand, and the character relations are adequately explained and defined. Though we did stumble initially, by the third episode my wife and I were clear on how each person related to another.

Though I do have my reservations about the future of the show, I suppose there is the potential for it to continue past its upcoming eighth season. The loss of Anna Faris will be a hit, but Lorre has proven in the past that he can find a way to keep going. I wonder will his be the addition of another character, or just an expansion of the already established ensemble.

Jeremy Butler is a film school graduate of the International Academy of Design and Technology. He is been writing for Upcomingdiscs since 2012; however, movies have played a big part of his life for much longer. Favorite genres include horror, science fiction/fantasy, and comedy. Favorite movies are V for Vendetta, Boondocks Saints, Kiss Kiss Bang Bang, and The Godfather.
Genesis II / Planet Earth 2-Film Collection (Blu-ray) DC’s Stargirl: The Complete First Season (Blu-ray)