Posted in: Disc Reviews by Gino Sassani on October 3rd, 2020 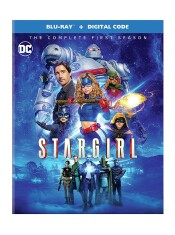 “You had me worried at first. A new Starman? That’d be big trouble. A real game changer. Imagine my relief. No Starman. Just a silly little Stargirl.”

The original Starman was created by Gardner Fox and Jack Burnley back in 1941. Since that time there have been quite a few DC characters that have taken on the mantle of Starman. When DC executive and veteran comics writer/creator was asked to do a series on one of Starman’s sidekicks, Pat Dugan and his eventual comic Stars And S.T.R.I.P.E., he was given a directive that he could not use the iconic S.T.R.I.P.E. armor, and that just would have made the series so much weaker. Instead he counter-pitched an idea from the same era of the comics. He pitched the idea of a new Stargirl who would be somewhat based and named after his daughter Courtney, who was tragically killed in a plane crash when she was just 18 years old. He wanted to do something to represent the spirit of his daughter, and the pitch also allowed for the Pat Dugan character to appear without the famous armor. The idea was accepted, and the latest member of the DC television Arrowverse was born. Enter Courtney Whitmore, played by Brec Bassinger in Stargirl. Warner Brothers delivers that first season in a new Blu-ray release of Stargirl: The Complete First Season.

The series begins 100 years in the past. The JSA (Justice Society of America), a 1940’s and 50’s precursor to the Justice League is taking on their arch-villains of the ISA (Injustice Society of America). It’s not going very well. While they managed to stop whatever plot the organization was planning, it was a massacre, and the JSA were defeated and killed. The only survivor was Pat Dugan, played by Luke Wilson. With his dying breath, he asks Dugan to pass along the staff but admonishes him in a rather humorous moment that it not be him. Dugan was just a sidekick and not considered to be quite serious or good enough to be a member of the JSA.

Jump 10 years ahead, and Pat Dugan and his son Mike (Romano) have just joined families with Barbara Whitmore (Smart) and her daughter Courtney. They are leaving behind the hustle and bustle of L.A. to Barbara’s hometown, the sleepy little Blue Valley. Unknown to Pat, it also happens to be where the ISA have been laying low and working on a brand new plan called The New America. They are building a machine that will allow them to control the minds of half the country where they will instill small-town values and secede from America. But for the new family, there isn’t any inkling of the adventures to come.

It’s typical stepdad/stepdaughter routine for Dugan and Courtney. They don’t really get along. Courtney’s dad disappeared 10 years ago on Christmas Eve. Dugan still hasn’t found anyone to take over for Starman, and he’s apparently moved on and hopes to have a normal life with his new family in a new home. He opens up a small town garage, and Barbara goes to work for the town’s big employer Jordan Mahkent (Jackson) unaware that he’s the leader of the not-so-dormant ISA and is the supervillain Icicle. Everything changes when Courtney ventures into the basement and the Cosmic Staff of Starman lights and calls to her from the crate it’s packed in. The staff takes her on some gymnastic moves and flies her over the city. When Dugan discovers she’s been using the staff, he tries to stop her. But she now thinks that Starman was her father, because the massacre of the JSA happened the same Christmas Eve night that her father disappeared. She carries his picture in a locket, and he does bear more than a little resemblance to the late superhero. Dugan discovers he can’t stop her, so he decides to mentor her and try to keep her out of trouble. He takes her to the old JSA Hall of Justice to instill history and respect in her, but she manages to steal the other JSA artifacts and sets out to recreate the JSA.

Her first recruit is fellow outcast Yolanda Montez (Monreal). Yolanda became the school joke when her boyfriend got her to send sexy pictures that he ended up sharing with the school. Courtney gives her the cowl and costume of Hellcat, and Yolanda instantly takes to the skills and powers. She has claws that can rip through steel. She always lands on her feet and has the moves of a feline. While reluctant to join, she eventually can’t resist.

Next up is Beth Chapel (Washington) Beth is also not a popular student. She talks a lot, and fast, and can’t seem to make friends even though she’s got a heart of gold. Courtney gives her the goggles of Dr. Midnight. They are like a heads-up display in an Ironman suit. Instead of Jarvis she has the voice of the AI Chuck that interacts with her and helps her digest the wealth of analytical data the goggles can provide. She kind of bonds with Chuck, who likes her talking and becomes her virtual friend.

Then there’s Rick Tyler (Gellman). His parents were members of the JSA and were killed by Solomon Grundy. Rick never knew any of this before Courtney and her new pals show him what really happened courtesy of Chuck. She gives him the hourglass of Hourman. When turned it gives him one hour a day of super strength. The recruitment of Rick is going to be a problem for Yolanda. You see, Rick is the boyfriend who betrayed her. But now the young teen version of the new JSA is complete.

Of course, you need bad guys, and the ISA has infiltrated Blue Valley. The project of New America is the brainchild of Icicle, but he needs his ISA friends to complete the work. Brainwave (Baker) has been in a coma thanks to an early encounter with Stargirl. It is his ability to control minds that will allow the machine to alter all those other minds. The device is really a complete Marvel rip-off. It’s Cerebro, right down to the exact design of a walkway leading to a suspended circle in a domed room made of panels. Sportsmaster (Hopkins) uses balls and bats to take out opponents along with wife Tigress (Osmanski), who has powers much like Hellcat. They use their powers to kill coaches at the school who dare bench their daughter who is on the football team. That’s OK, because the school principal is The Fiddler (Khan), who controls people and nature by playing a violin. The Gambler (Goins) is a master of probability and computer codes. He’s stealing the software that makes the machine work. Finally there’s Dragon King (Lee), who is a war criminal from over a century ago. He runs a cult of zombies and is always covered. His daughter Cindy (DeLacy) wants so much to join her father’s ISA and takes on Stargirl to try to prove her worth.

To round it off, Dugan has built a giant robot to help with the group. It’s a kind of transformers-looking thing, because he made it out of classic auto parts. It makes him a part of the team, and Luke Wilson really sells the emotional journey of going from sidekick who wasn’t really respected to the mentor of these kids and new JSA. Wilson is a real asset to the series.

The show has a really nice seasonal evolution. Brec Bassinger has a lot of heart and energy. She’s genuinely infectious, and like her Stargirl counterpart, you can understand why people would be attracted to her enough to follow her. She’s one of the best new characters to join the Arrowverse in a long time and one of the best matched actors/characters to play a lead in one of these shows. Her chemistry with Luke Wilson is a really big part of the heart of the show. They are great together and serve as such an emotional anchor for all of this. And I think that’s what attracts me to the show, really. It’s full of so much wonderful emotions that you just don’t see in this kind of series. The focus is really on these characters and their evolving relationships. The fights and f/x are all secondary, and that really gives a show like this the kind of legs I hope will endure.

Another strength of the show is the music selection. There’s a 50’s retro feel to much of the show with the insignia looking very much like a car model font from the 50’s. The series uses both vintage and modern songs, and they blend so perfectly with the themes and emotions of the series.

Each episode is presented in its original broadcast aspect ratio of 2.20:1. The 1080p image is arrived at with an AVC MPEG-4 codec. There are good production values here, and you get something better than broadcast or streaming, to be sure. Black levels are fair, and the colors do pop on this show in particular.

There are no extras.

I’m not sure what the production schedule was for the show. It’s a streaming show and not on the CW like the other Arrowverse shows. It does not appear to have been shortened by the pandemic, as the season finale wraps up the storyline and ends with the perfect scene to take us into the next season. With no extras, there was no one to talk about that particular issue, but I suspect production might have gotten in before the pandemic closed down shooting for television and film productions. I was more than a little skeptical about this show going in. But after such a strong season, I’m invested enough to be looking forward to more. “Does this mean I get to be in the JSA?”

Gino Sassani is a member of the Southeastern Film Critic's Association (SEFCA). He is a film and television critic based in Tampa, Florida. He's also the Senior Editor here at Upcomingdiscs. Gino started reviewing films in the early 1990's as a segment of his local television show Focus. He's an award-winning recording artist for Omega Records. Gino is currently working on his 8th album Merchants & Mercenaries. Gino took over Upcomingdiscs Dec 1, 2008. He works out of a home theater he calls The Reel World. Favorite films: The Godfather, The Godfather Part II, The Body Snatcher (Val Lewton film with Karloff and Lugosi, not the pod people film), Unforgiven, Gladiator, The Lion King, Jaws, Son Of Frankenstein, The Good, The Bad And The Ugly, and Monsters, Inc.
Mom: The Complete Seventh Season Rick & Morty: Season 4 (Blu-ray)