Posted in: No Huddle by Brent Lorentson on October 7th, 2020 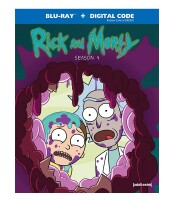 While I enjoyed the first couple seasons of Rick and Morty, I wasn’t all that sure about the show’s staying power with Adult Swim. I’d talk about the show with some friends, but for the most part this seems to be a show that finds its fan base more in their late teens.  It’s fair to say it’s been more than a few years since I was a teenager, so perhaps it shouldn’t be much of a surprise that  I was a little hesitant with this season (feel free to check out my review of Season 1).  When Season 3 came out, the show blew up in a big way, gaining numerous fans and even managed to make “Pickle Rick” a part of everyday pop culture and make Szechuan sauce at McDonalds a thing.  The show for those who may be unfamiliar is something of a blend between Back to the Future and more than a sprinkle of Futurama.  If that sounds like a fun ride, well, then this may be the animated series for you.

Season 4 kicks off with Rick and Morty going on an adventure that takes them to a planet where they find rocks that when you hold them can show you the numerous outcomes of every decision you make, ones that mostly lead to various forms of violent death or even love.  Once Morty gets a hold of one, he sees that if he follows the will of the rock, he can eventually wind up with his high school crush.  It’s piggybacking off the idea from Live Die Repeat, but giving a fun twist on the idea.  On a technical level this is an impressive episode when you consider how much animation is going on in this episode as well as how many deaths occur over the course of the episode.  It may take a couple viewings to catch them all, but there are some unique kills here.  Everything about this episode is bigger than what we’ve seen from the show in the past, but bigger isn’t necessarily better in this case.

The first couple seasons were more dialog-heavy, and we actually got some decent character development along with some unique stories. Now the show seems to have amped up on their animation and taken a step back from what made the show so engaging from the start.  The visuals are pretty incredible, though; the detail on the various planets and reality has stepped up as well as the amount of aliens and action going on in a screen. Also the action and gore have stepped up significantly.

Personally my favorite episode is Rattlestar Ricklactica, which has Rick and Morty discovering there is a planet ruled by snakes and has Morty feeling guilt over killing one of the “space snakes” that will eventually lead to the planet’s extinction according to Rick. It’s Morty’s guilt that has him buying a snake and sending it to the snake planet that causes everything to spiral out of control.  With its parallel history to Earth and then it riffing on The Terminator franchise, this episode is bonkers and fun.

Another aspect to how the show has gotten bigger is the number of guest voices that are coming in for the episodes. Sam Neill, Kathleen Turner, Taika Waititi, Jeffrey Wright, Elon Musk, Matthew Broderick, and several others.  As the show gets bigger, I’m expecting even more actors to flock to the show to lend their voices as we’ve seen in the past with hit animated shows like The Simpsons, Family Guy, and South Park.

As I mentioned before, the animation this season is pretty great, but when it came to episodes I can feel lived up to the previous seasons, well, there weren’t many.  Now that the show has been renewed for several more seasons (most likely with a quicker turnaround expected), I’m worried this may have an impact on the quality of the show.

Sure, this may not have the amount of laughs from the previous seasons, but it still continued to be a fun ride, and, well, that’s all we can ask for.  I’m still curious to see where the show will go from here, and I have hope that there is still some magic in this creative bottle.

Included on the disc are some bonus materials that give you a glimpse into the making of the animated series.  There is also an animated short Samurai & Shogun that is incredibly well done, and each episode has a brief behind-the-scenes look at the episode.

Brent Lorentson is a horror writer and film critic based out of Tampa, Florida. With a BA in Digital Film, he co-wrote and co-directed Scavenger Hunt. His short stories have appeared in various horror anthologies. In 2019 his short script Fertile Blood will be a part of the anthology horror film Slumber Party. He is currently working on his first novel A Dark and Secret Place set to be released in late 2019. Favorite Films: Taxi Driver, Fight Club, I Saw the Devil, The Wild Bunch, Dawn of the Dead, A Clockwork Orange, Pulp Fiction, Heathers, The Monster Squad, and High Fidelity.
DC’s Stargirl: The Complete First Season (Blu-ray) The Pale Door (Blu-ray)