Posted in: Disc Reviews by Brent Lorentson on October 8th, 2020 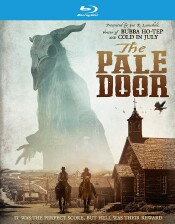 I always get a little worried when I’m handed a low-budget western. Despite it being one of my favorite genres, I’m just quickly turned off by a film when it visually doesn’t look authentic.  I like my westerns dirty and rugged, so when I see characters in costumes that look too clean as though they were just pulled from the rack, it’s a giant pet peeve.  What had me intrigued with the film was the involvement of Joe R. Lansdale, who happens to be one of my favorite writers, and he somewhat specializes in the “weird” western genre.  Bubba Ho-Tep or The Hap and Leonard series are what most would be familiar with from Lansdale. He may not have the name strength that Stephen King carries, but I’ve come to expect a good time from Lansdale.  Granted The Pale Door only has Joe  R. Lansdale attached as a producer, though his son was involved at some point with the writing of the script, so is that enough to make this film worth a watch, or is it a disappointment?

Right from the start I just want to say this film gets off to a bad start.  I know it’s setting up the relationship between the brothers in the film, but the first 15 or so minutes of this film should have been left on the cutting room floor.  In my opinion the film could start right up when the Dalton Gang is robbing the train and the film would have been stronger for it.  As for the train robbing sequence, I’m glad the filmmakers openly admit they are “ripping off” the train sequence from The Assassination of Jesse James by the Coward Robert Ford. If you are going to rip off a sequence, it’s better when you steal from the best. If you haven’t seen the film, you at least should watch it for the train sequence alone…but keep watching because it’s simply a beautifully shot and well crafted western.  Sure, the film is shot on a budget, but I appreciate the effort put into this sequence, and in the commentary the filmmakers reveal this wasn’t even what had been intended in the script, and for what they manage to get with the final product, well, good for them.

As for the Dalton Gang, Duncan (Zachary Knighton) leads the group of outlaws with his little brother, Jake (Devin Druid) tagging along.  The story at its heart is about family, not just the ones you’re born with, but the ones to forge through friendships over time. While I feel this would have been more effective if the Dalton Gang wasn’t so loaded up with unremarkable characters, the ones we do get to know like Dodd (Bill Sage), Wylie (Pat Healy) and  Lester (Stan Shaw) are strong enough personalities that they thankfully leave an impression.  The whole purpose of robbing the train was obviously that the gang was expecting a big score, but instead they come away with a trunk that has a bound and gagged girl trapped inside.  The girl claims to not know why she’s been locked up as she is, but she claims that if the gang returns her to her home they’ll be rewarded. With Duncan suffering from an injury and with the Pinkertons possibly on their trail, the gang sees their best option is to get this girl home.

Cue the brothel of witches.  Very quickly this film dovetails into a retelling of From Dusk Till Dawn, minus the snappy dialog.  Where the gang believes they’ve found refuge, they are instead the prey for this vicious coven of witches.  I understand where some people will hate this. For me I loved it. This is the kind of stupid fun you want from a low- budget horror film at 2 AM.  I’m a fan of genre mash-ups like this, but what won me over is I dug the creature design and the fun visuals we get.  This isn’t Hereditary, nor is it trying to be; it’s simply being an entertaining popcorn flick.  The film didn’t even need to explain these witches. I was onboard with the film, but when it gives a little back story to how they came to be, personally I dig the origin tale, and the fact that the leader of the coven is Maria, played by the fantastic Melora Walters, just made it even better.

There’s a lot of talent on screen for this film. Maybe you won’t know all their names, but they are certainly faces you’ll recognize.  My biggest complaint is I wish they got more to do. Pat Healy pretty much steals just about every scene he’s in, but what is problematic is that though the story is supposed to revolve around the brothers, they are the ones who make the least impact here. Lester functions as the surrogate father to Duncan and Jake, yet when things inevitably go wrong for Lester he gets such a piss-poor sendoff, it’s kind of irritating. Another complaint goes to the lack of atmosphere developed either through visuals or through sound.  If it was not for the witches, you wouldn’t know this is a horror film. There is no creep factor in the visuals despite some of the fun camera angles.

The Pale Door is presented in the aspect ratio 1.85:1.  The 1080p image is arrived at with an AVC MPEG-4 codec at an average of 35 mbps.  This is a sharp-looking film, and that’s part of the problem; because of the sharp imagery it seems some of the atmosphere got lost in the process.  A good portion of the film is shot at night, and we do get plenty of detail, but sometimes less is more.  I noticed in the train sequence, during the exteriors some of the darks got blended together where there really wasn’t much separation. Is it a deal-breaker? Not at all.

The DTS HD-Master Audio 5.1 track is clean and clear when it comes to dialog, and the action sequences sound good, but what’s problematic is the lack of ambience or elements to make this feel more like a horror film.  There are so many moments that could have elevated the suspense by the use of sound, and it just doesn’t deliver.

(Filmmaker Commentary) Co-writer and director Aaron B Koontz along with his co-writer Cameron Burns sit down for the commentary that they recorded during the COVID-19 quarantine. This is a pretty insightful commentary filled with information about the production, and if you’re a fan of the film and have dreams of making movies of your own, this is worth checking out.

The Making of The Pale Door: (17:16) Basically this gets into how the project was originated and dabbles a little bit in the production and several things that went wrong during the production. It’s a bit refreshing seeing this, as it goes a bit further than standard behind-the-scenes bonus materials and gives the viewer more insight on the project. This also includes Editing The Pale Door, which discusses how the editor came on board the project.

I wasn’t sure what to expect with this one, but at the end of the day I had fun with this movie. It’s B-Movie entertainment that is entertaining and is a lot better than most direct-to-video releases.  Sure, it borrows from some great films, but the filmmakers managed to make this feel more like a homage than a cheap knockoff.  It’s perfect late-night fun, but you may want to fast-forward past the opening parts.

Brent Lorentson is a horror writer and film critic based out of Tampa, Florida. With a BA in Digital Film, he co-wrote and co-directed Scavenger Hunt. His short stories have appeared in various horror anthologies. In 2019 his short script Fertile Blood will be a part of the anthology horror film Slumber Party. He is currently working on his first novel A Dark and Secret Place set to be released in late 2019. Favorite Films: Taxi Driver, Fight Club, I Saw the Devil, The Wild Bunch, Dawn of the Dead, A Clockwork Orange, Pulp Fiction, Heathers, The Monster Squad, and High Fidelity.
Rick & Morty: Season 4 (Blu-ray) The Good Fight: Season Four