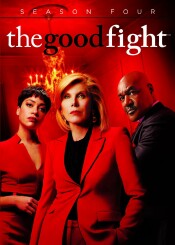 This is a show that always surprises me because it is so far out of the reaches of the type of project that I am usually attracted to, but every time I watch, the cleverness and sharp-wittedness of it always wins me over. Season 4 is no different. Though it can get very political and the series is unafraid to take shots at the President, this season provided quite possibly one of its most well-balanced episodes with the season’s opening. However, before we get to that, let’s have a brief recap of where we left off in Season 3. The end of the season saw the departure of Rose Leslie’s Maia Rindell, who after a rollercoaster season which included her getting fired from Reddick Boseman Lockhart, departing for the capital to lead her own firm. Meanwhile, Diana and Liz joined an underground political opposition group for the purposes of undermining Donald Trump’s presidency. While they both are start off as enthusiastic members of the group, with Diana going as far as to secretly seize the leadership position when a prominent member disappears. However, the missing member is revealed to be a charlatan, causing Diana’s charade to be exposed. Additionally, the group’s tactics change, becoming darker and more ruthless, prompting Diana and Liz to distance themselves from the group. Threatened by Diana’s potential exposure risk, the season ended on a cliffhanger that saw Diana’s and her husband’s lives in danger.

Now in regards to the season opening, Diana wakes up in a alternative reality where Hillary Clinton won the election. Though initially ecstatic about this change, she quickly learns that not everything is rosy as she learns in this world there is no #MeToo movement, and Harvey Weinstein is still a prominent movie producer, but also her newest client. This was an interesting episode, as it was the first series episode that didn’t feel overly critical of Donald Trump. Granted there were still occasional jabs at the President, usually in the form of someone laughing at the idea of him winning the election, but the acknowledgement that both outcomes have their pluses and minuses was very intriguing.

As far as season arcs go, the main one had to do with a particular memo that appeared to allow the rich not to comply with judicial rule. This Memo 618 and Diana’s pursuit to find out more about it is the main vehicle for the season. It is also the most interesting development, as it provides elements of mystery into the season. When first introduced, we see the dangers of standing against it, as former partner at the firm and now judge Julius Cain finds his morals compromised when overtly threatened. Unfortunately, we never really get to the bottom of it, though it will likely play a role in the events of Season 5, having far reaching consequences for Julius and Diana.

Other themes include the firm merging with a bigger multinational firm and named partners, Adrian Boseman, Liz Reddick, and Diana Lockhart, immediately feeling the pressure and oversight from this firm as they begin to undermine their business practices, as well as with their personnel. Before long, the firm finds themselves chafing under their new overlords. This, too, was not resolved before the season’s end and will likely play a role in Season 5. Additionally, Liz gets a love interest in the from of season’s addition Hugh Dancy, creating a bit of a workplace taboo. Dancy is great and charming. He had great chemistry with Sarah Steele’s Marissa Gold in his introductory episode, and I fully expected this to be further developed, but the series went in a different direction, bringing him into the orbit of Audra McDonald’s Liz. Even still, I was not mad at the decision, because it infused that layer of naughtiness that made their scenes that more intriguing. I don’t feel we got a satisfactory resolution to this either, as Dancy just disappears without explanation in the later episodes. Finally, Adrian Boseman continues his relationship with Judge Charlotte Hazelwood from Season 3, but their future is threatened when Boseman receives a most appealing offer.

I’m sure you noticed that many of the season’s storylines were not completed before season’s end. There is a very distinct reason for that: COVID-19. Season 4, which also features a series low when it comes to episode count (seven episodes in comparison to its usual 10), was impacted by the need for a production halt, causing several themes to go unresolved. This was very frustrating, like starving yourself for a party later in the evening only to find out that they are only serving hors d’oeuvres. I remain hopefully that each of these storylines will be sufficiently wrapped up in the recently announced fifth season. This, however, will have to be done with addition of Delroy Lindo’s Adrian Boseman, who recently announced that he was stepping down as a series regular on the show to pursue other projects. I fully expect this to be a blow to the series, similar to the lost of Josh Charles’ Will Gardner on The Good Wife. However, if we learned anything from that show, which was the blueprint for this show, it is possibly to keep going despite the loss of an integral character. Difficult, but still possible.

Though I was left with a bit of an incomplete feeling by the time I watched Episode 7, I was still thoroughly entertainment by the six that came before it and still found the show to have the same intrigue that it held for me in Season 1. It was only by circumstances beyond its control that I wasn’t made whole, so I can’t hold it against them. The only thing I can say is that I’m looking forward to seeing how they address these storylines in Season 5.

Jeremy Butler is a film school graduate of the International Academy of Design and Technology. He is been writing for Upcomingdiscs since 2012; however, movies have played a big part of his life for much longer. Favorite genres include horror, science fiction/fantasy, and comedy. Favorite movies are V for Vendetta, Boondocks Saints, Kiss Kiss Bang Bang, and The Godfather.
The Pale Door (Blu-ray) Batman: Death in the Family (Blu-ray)