Batman: Death in the Family (Blu-ray)

Posted in: No Huddle by Jeremy Butler on November 9th, 2020 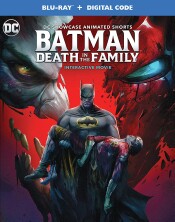 The 1988 Batman comic storyline that featured the death of the second Robin, the impulsive Jason Todd, is remembered as one of the most important in the Batman family of comics. It told the story of how after being relieved of his duties as Robin, Jason Todd began a quest to be reunited with his birth mother, only to be kidnapped, tortured, and eventually killed at the hands of Batman’s most notorious nemesis, the Joker. Though Batman did manage to bring the Joker to justice, the loss of Todd had a profound affect on Batman as well as the rest of the Batman family for years to come. Because of it, Batman resolves to continue alone, and while he did eventually take on another Robin, he never was the same. But what if it didn’t have to be that way? What if Jason didn’t die? How would the Caped Crusader’s life have been different if he’d been able to save his former protégé? We don’t have wonder anymore thanks to the DC Animated Universe, which just introduced Batman: Death in the Family, the first interactive animated movie that allows the watcher to choose Jason’s ultimate fate. With multiple separate storylines, the audience has the power to decide if Robin dies, cheats death, or is ultimately saved by the Dark Knight. So, which will you choose?

This was the best method of telling this story in my opinion. Allowing the audience to pick what happens to Jason Todd is a very immersive experience and in keeping with the legacy of the original comic. For those who don’t know, Jason’s fate in the 1988 comic storyline was decided by a 900-number voting system. Fans called two separate numbers and chose whether Jason would survive the Joker’s torture or die because of it. It only seems fitting that the audience have that same power with this animated film.

I don’t want to go into too much detail, but as someone who played out all the options, let me tell you that the decision itself was probably the most fun part. That’s not taking away from the storylines, but making the call just really gave me a sense of being part of the process, even if they are predetermined storylines. As you can probably guess, one of the decisions will ultimately lead you into the events of another DC Animated film (Under the Red Hood). Fortunately, there are some modifications and additions to this storyline to keep it from becoming stale for those who have already seen that film (i.e. me). Then there is a storyline that ultimately has multiple branching paths that leads to other decisions that must be made by the audience.

I won’t betray the fun by saying which storyline it is, but I will confess that it was my favorite of them all. In this order of events, I got to decide the fate of other characters as well. Or rather, what Jason chooses to do in regards to those characters. The story is predominantly from Jason’s perspective, and as such every decision essentially decides his ultimate fate. There are a multitude of ways he can end up. Again, I won’t spoil the fun by listing them all, but let’s just say that some fates are worse than others, while others determine if Jason remains a hero or becomes a villain.

This may very well be one of my favorites among the animated films produced under the DC banner, and that is no easy feat, as I’ve long been a fan of their animated universe, especially the Justice League Dark and Flashpoint Paradox films. It’s quite simple to figure the reason for my approval. The idea of being able to choose is seductive, but also credit has to be given for creation of so many potential outcomes; it truly makes for a unique experience. I can keep popping in the same disc multiple times and get a different outcome. If you limit yourself to one outcome a day, you can get several days of entertainment from this one disc. You can’t ask for more than that.

Jeremy Butler is a film school graduate of the International Academy of Design and Technology. He is been writing for Upcomingdiscs since 2012; however, movies have played a big part of his life for much longer. Favorite genres include horror, science fiction/fantasy, and comedy. Favorite movies are V for Vendetta, Boondocks Saints, Kiss Kiss Bang Bang, and The Godfather.
The Good Fight: Season Four The Great: Season One