The Great: Season One

Posted in: No Huddle by Jeremy Butler on November 10th, 2020 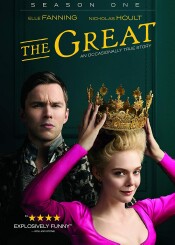 Catherine the Great, born Sophie of Anhalt-Zerbst, is one of the most prominent figures in history. She is a woman who managed to overthrow her husband, Peter III, and succeed him as the Empress of Russia, becoming the country’s longest-ruling female leader. Under her reign, the country grew larger, its culture was revitalized, and it was recognized as one of the great powers worldwide. Her life has been the subject of many textbooks, as well as being retold on the stage, in film, and on television. Several prominent people have portrayed the character, including Helen Mirren. Have you ever wondered how she did it? How she managed to take away the birthright of her husband and succeed him? Wouldn’t you like to know how it was done? Well, if that is the case, I recommend you pick up a textbook, as the Hulu series, The Great, will not give you a accurate account of that. However, if you want an entertaining and sometimes factual account, I thoroughly recommend you give the series a watch. Elle Fanning portrays a young Catherine as she marries Peter III, played by Nicolas Hoult, and quickly realizes that he will not do as the ruler of Russia. Though not born in that country, she endeavors to save it from the clutches of her immature and incompetent husband.

As previously stated, The Great is only loosely based on the rise of Catherine the Great, there are obvious flourishes to make the series more entertaining, but even so the events still unfold in a manner that makes it believable. When first meeting her husband, Catherine quickly realizes that he is nothing like she imagined a great ruler to be. He has no real interest outside his own gratification, evident by the consummation of their marriage, which is completed without him even pausing a conversation he was previously having with a member of court. He is also engaged in an extramarital affair with that very same member of court’s wife. Peter goes on to show how little he cares for his wife, by burning down a school that he previously consented to allow Catherine to build when he realized her intention to educate women. The final straw comes when he strikes Catherine after she criticizes his treatment of her. Unwilling to resign herself to her fate as conduit for his heirs, Catherine decides to end her life until a servant, an exiled noblewoman, tells her that in absence of an heir, succession would fall to her if Peter was removed from power. Armed with new knowledge, Catherine staves off ending her life and commences plans for a coup.

The first season puts together all the steps for the future coup. It tells the story of a well-organized plot, equipped with all the necessary measures taken, such as recruiting allies, gaining the respect of the people and military, as well as managing international relations. It is a steep learning curve for Catherine, who up until this point only had romantic notions of seizing the country. Over the course of the ten episodes, Elle Fanning transformed from wide-eyed young girl into a political animal. It was a transformation that was great to watch, and it is not without its stumbles. Following an unforeseen event which nearly would have seen her gain everything she wanted early than she anticipated, Catherine falls apart and experiences her first moments of doubt about her ability to lead a country. I had great appreciation for this inclusion, because it helped ground the earlier events in reality. It lent authenticity to the show, which was heavily infused with elements of raunchiness. No leader is confident all the time, and doubt comes with the job description, unless you are indifferent to their role, as Peter is portrayed. Seeing Fanning’s character struggle added depth to the character.

When it comes to Nicolas Hoult’s portrayal, anyone can play a smug and entitled jackass, but for Hoult, who is usually in more heroic roles, it showed his range as an actor. He made you really dislike him, and he did it with ease. From the moment he appears on screen, you can’t help but root for the inevitability of the coup. He is vain, selfish, and he has a cruel streak that is on full display with his every action. Even when his character has an epiphany at the midpoint of the series and endeavors to win his wife’s heart, he is still a repugnant individual. His ruthlessness knows no bounds, as shown when he and Catherine eventually have their standoff and the threatens the life of someone she holds dear. Up until this point, I hadn’t thought Hoult capable of such a role, but he delivers.

While satirical in nature, the show manages to maintain a good balance between being funny and still keeping its historical relevance. My wife was a huge fan of the show. She found it very empowering in the latter episodes, as Fanning came into her own as a leader. For me, the culmination of this came in the season finale, when she is faced with the ultimate choice; love or legacy. I also appreciate the fact that while making this decision, she received advice from another prominent figure. It was a conversation that was both profound and hilarious. The season ends on an ambiguous note, but not to fret, as it has been renewed for a second season. I for one look forward to seeing the events of the next season. After you watch, I’m sure you will, too.

Jeremy Butler is a film school graduate of the International Academy of Design and Technology. He is been writing for Upcomingdiscs since 2012; however, movies have played a big part of his life for much longer. Favorite genres include horror, science fiction/fantasy, and comedy. Favorite movies are V for Vendetta, Boondocks Saints, Kiss Kiss Bang Bang, and The Godfather.
Batman: Death in the Family (Blu-ray) El Camino: A Breaking Bad Movie