Posted in: No Huddle by Jeremy Butler on November 10th, 2020 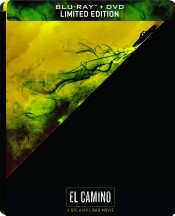 Anyone wondering what exactly happened to Jesse Pinkman after the series finale of the AMC popular drama Breaking Bad? I mean, when we last saw him, he was fleeing captivity in a stolen El Camino for parts unknown as police began to surround the place that had been his prison for months. Anyone curious how that story concluded for the fan-favorite character? Well, you’re in luck, as Netflix has answered the request and produced a subsequent film in order to give Jesse Pinkman a more of satisfying ending to his story. Given that he spent a good chunk of his last season in captivity being forced to make meth, I can’t blame them for wanting to follow up. As expected, Aaron Paul reprises his role as Pinkman after a six-year separation from the character. Paul, who has gone on to find greater success since the end of the series, clearly still has great love for the character who helped bring him to prominence, and also garnered him several accolades including three Primetime Emmy Awards for Outstanding Supporting Actor in a Drama Series.  Several familiar faces return in order to give the series the proper sendoff, including Krysten Ritter’s Jane Margolis, Jesse Plemons’ Todd Alquist, Jonathan Banks’ Mike Ehrmantraut, and yes, of course, Bryan Cranston’s Walter White.

Picking up directly after the events of the Season 5 finale, Jesse Pinkman has escaped the Aryan Brotherhood’s custody by fleeing in Todd Alquist’s El Camino. Taking refuge with his friends Skinny Pete and Badger, he is well aware that a manhunt is underway for him and needs to disappear. However, having just escaped captivity, he is without resources. Until he remembers a means to get the funds needed to engage the services of a “disappearer.” Unfortunately, he is not the only one after the money, and he has to stay one step ahead of everyone who is after him.

I have to admit that I kind of missed the boat when it came to the Breaking Bad series. From friends, I heard about how great a show it was and the sheer number of accolades that were bestowed on the series, such as 16 Primetime Emmys, two Peabody Awards, as well as catapulting the career of Paul and Cranston to meteoric heights. To better prepare myself for this film, I did some research into the show, and I’m sorry that I missed the boat. There were quite a few elements to the show, as well as a slew of familiar faces. In regards to this film, everyone seemed to flawlessly step back into their characters despite the varying years of separation between their reprisals. For Paul, it was a journey of transformation with his character. He’s grown hardened after his experiences and the all the manipulations from his once former partner and mentor. He’s become more cunning, so much more ruthless, as shown in a western-themed scene, where he outwits an adversary. You’ll know it when you see it, and I’m quite certain that, like me, you will have new appreciation for the character.

While the ending is a bit ambiguous like the series finale, it does provide satisfactory closure for the character who had to endure so much. While we may not have a complete answer as to what is in store for him, we are left hopeful that he does get what he is looking for. It was also good to see so many cast members willing to return to the series after being away for so long. Granted, a majority of these members were already dead by the events of the movie, so their contributions are in the form of flashback sequences. They still have impact, as these flashbacks serve the purpose of furthering the plot and helping guide our protagonist towards his ultimate goal. For me, it was all about the return of Jonathan Banks as Mike Ehrmantraut. From what I’ve gathered from the show, he would have been my favorite character. While he was perfectly capable of being ruthless, he did have some type of code and provided guidance to Jesse. This holds true for the film as well, as in his flashback he gives Jesse sage advice regarding the course of his life as well as a path for the future.

I do believe that El Camino will provide fans with the closure that they needed or didn’t know that they needed, as it is my understanding that the series finale is considered among one of the greatest for a television series. Even so, if there were any lingering question regarding Jesse, I do believe that they have been answered with this continuation film. Though not a day-one fan, the film has inspired me to watch the series. Granted, I’ve had the mother of all spoilers, so it’s a bit like reading a book backwards. I do believe the quality of the film is that of the show, so I think I’ll be fine. I fully recommend that fans of the show make sure that they see the film as well.

Jeremy Butler is a film school graduate of the International Academy of Design and Technology. He is been writing for Upcomingdiscs since 2012; however, movies have played a big part of his life for much longer. Favorite genres include horror, science fiction/fantasy, and comedy. Favorite movies are V for Vendetta, Boondocks Saints, Kiss Kiss Bang Bang, and The Godfather.
The Great: Season One Cats & Dogs 3: Paws Unite!