Posted in: Disc Reviews by Jeremy Butler on November 11th, 2020 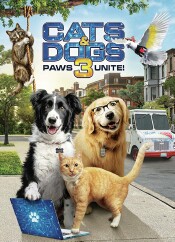 “And so it began. 30,000 years ago, man discovered his best friend. Dogs were man’s best friend and only animal companion for the next 15,000 years. And then cats came into the house, y’all. For the next 15,000 years cats and dogs fought each other, hissing and barking and breaking things along the way. With the emergence of technology, harmless skirmishes grew into diabolical plots as cats and dogs tried to eliminate each other as humans’ companion. Eventually humans grew tired, so dogs and cats had to do something if they wanted to stay the number 1 and number 2 animals in the human household. Cat and dog leaders worked together to stop these plots and formed an organization called The Furry Animals Rivalry Termination… The last decade has been the most peaceful in centuries.”

This movie is proof positive that Hollywood refuses to let a franchise die. I wasn’t really fond of the original film in the franchise, and I completely ignored its sequel; however, this standalone sequel managed to be mildly entertaining. Granted, it is extremely over-the-top. To the point that it borders on the ridiculous with some of its antics. Like a parrot driving an ice cream truck. Still, I had to remember that I was not the demographic that the film was designed for. This is where I rely on my trusty daughter to help me give these movies a fair shake. Her exact words were, “Is it over yet?” I think that pretty much sums up how she felt about the film. It’s ironic; the movies that I don’t mind so much are the ones that she really doesn’t vibe with. And the movies that she tends to be intrigued by, for me it’s like my eyes are bleeding. I begin to realize how different my daughter and I are.

In this third installment of the franchise, the scope is expanding beyond simply cats and dogs and encompasses a rogue’s gallery of pets. I felt that this was a clever idea. It allowed for the addition of animals such as birds and lizards, as well as providing a fresh premise. Tired of the preferential treatment that cats and dogs get from humans, a parrot along with several other members of the ignored section of the pet store devise a way to cause a rift between cats and dogs. Over the last decade, a truce has been struck between cats and dogs, and to enforce this truce a joint-species surveillance organization has been founded to keep the peace. But when, a rival organization develops a signal to antagonize relations between the two species, the potential for another war arises. It is up to agents Roger (Max Greenfield, The Neighborhood) and Gwen (Melissa Raunch, The Big Bang Theory) to discover the threat and neutralize it.

Well, trying to get an eight-year-old to explain why she doesn’t like something is a lot like pulling teeth; they tend to be nonspecific, and what you do get out of them doesn’t really make a whole lot of sense. So, allow me to spare you that torture and share with you my thoughts. In a nutshell, it is just a lot going on. You have the overall plot, which focuses on the breakdown in relations between dogs and cats. Then there is the subplot regarding both Roger’s and Gwen’s insecurities; Roger is a former field agent who, after making a mistake that resulted in his mentor getting hurt, feels more comfortable behind a desk, while Gwen is overzealous about the idea of fieldwork, but unsure and not confident about her ability to perform in the field. Then you throw up top of that the subplot involving their human counterparts. It’s just a lot to take in during the film’s 84-minute runtime. Because of this limited time, the story jumps back and forth between these plots an subplots, making it feel very choppy, and by the time I invested in one circumstance, we were on to the next one.

That being said, I’m not sure that you could cut any of these sequences, because the others aren’t strong enough or fleshed out enough to pick up the slack. I will admit that I did like the elevator sequence between human counterparts Zoe and Max, possibly because it ties into a lesson that I am endeavoring to teach my daughter: the importance of human interaction over digital interaction. This sequence also injects much-needed heart into the series, as both characters help each other through their personal challenges.

There is also another familiar face tied to the project. A voice that is impossible to mistake, comedian George Lopez. He plays a central role in the plot. This was the biggest draw for me, but unfortunately, I was not too swayed by his inclusion, which just came off as cheesy. Not to mention his character’s arc towards the end of the film felt kind of weak and cliché. The film attempts to redeem itself with a last second twist, but it is wrapped up too soon before any impact can be made..

Cats And Dogs 3 is presented in its original aspect ratio of 1.78:1. The 1080p image is arrived at with an AVC MPEG-4 codec at a disappointing bit rate average 15-20 mbps. There is very little difference between the Blu-ray and the DVD. Some colors pop. The blue jacket worn by one of the characters really pops. There’s an overall glossy look to it all that makes it look more like low-budget video. There’s nothing stand-out or terribly realistic going on here. The talking pets’ computer-generated augments are quite obvious. Black levels are only fair. At least there aren’t any compression issues. This is a kiddie film that doesn’t really need to stand up in the production department and lives up to that standard, at least.

The DTS-HD Master Audio 5.1 is surprisingly flat. There are plenty of antics here that allow for some potential surround moments and certainly some good solid sub reproduction. Instead you get clear dialog and a movie that lives quite tamely in the dialog center speaker.

Animal Charades: Making of Cats & Dogs 3: Paws Unite! (05:19): An in-depth behind-the-scenes featurette uniquely focused on the mechanics of working with pet actors. It gave me a bit more appreciation for the task that had to be undertaken.

Cast Reveals All: Deep Animal Thoughts (03:19): A cute little featurette that provides you with a look into the thoughts of animals. It’s really silly, but lighthearted and fun. Definitely worth a look.

Gag Reel (01:38): I bet you thought this was going to involve the human counterparts. You thought wrong. Animals miss their cues too.

So, while I managed to get a few moments of enjoyment from the film, it isn’t anything to write home about. I do believe that it provides a decent family movie night experience (just not in my household). I think that it will be more enjoyable if you can look past the over-the-top stuff. Then again, who are we to say that a bird can’t drive an ice cream truck. We don’t know what they do when we are not around.

Jeremy Butler is a film school graduate of the International Academy of Design and Technology. He is been writing for Upcomingdiscs since 2012; however, movies have played a big part of his life for much longer. Favorite genres include horror, science fiction/fantasy, and comedy. Favorite movies are V for Vendetta, Boondocks Saints, Kiss Kiss Bang Bang, and The Godfather.
El Camino: A Breaking Bad Movie The Vanished