Posted in: Disc Reviews by Brent Lorentson on December 8th, 2020 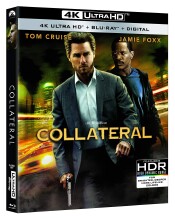 In 2004 when Collateral first came out, Michael Mann gave audiences something they’ve never seen before: Tom Cruise playing the bad guy. Sure, he played the vampire Lestat in Interview with the Vampire, but he just never seemed all that menacing. In Collateral we get to see him as a cold, professional killer with his salt-and-pepper hair and nondescript gray suit.  Also at this time, Jamie Foxx was still carving out a name for himself as a serious actor; this was just months before the release of Ray (the movie that pretty much catapulted him into stardom).  I was stoked for this movie when it first came out because it was Michael Mann getting back to what I felt he was great at, the down and dirty crime films like Thief and Heat.  I have to admit, I do have a slight bias when it comes to Michael Mann films, and I’ve seen Collateral numerous times before doing this review. Considering it’s been 16 years since its release, sure, the film still holds up, but what I feel will surprise new audiences or those who are revisiting the film is the amount of talent that is on the screen.

The film has a relatively simple setup. Vincent (Tom Cruise) comes into Los Angeles for one night to perform a series of hits while roping in a cab driver, Max (Jamie Foxx) to take him to each of his targets around the city.  The relationship between Vincent and Max is what carries this film, and despite a good portion of the film taking place inside the cab, the film crackles with tension and keeps us engaged from start to finish.  Part of this is due to the fact that despite being a hired assassin, Vincent is a pretty likeable character, that is up until we do see Vincent in action and we get a taste of just how dangerous he can be.  As for Max, he’s just a guy with a dream to have his own specialized limo service to cater to the stars. We see him possibly meet the woman of his dreams, Annie (Jada Pinkett Smith) as a fare he drops off just before Vincent steps into his cab.  The two men couldn’t be any more different, but as we see them interact it has me wondering what could have happened if these men had met under different circumstances, Max seems to be a guy with insight who is able to tap into what little humanity may be left in Vincent, whereas Vincent seems be a good motivator for Max to perhaps stop talking about his dreams and starting acting on them to make it happen.

While Vincent is busy taking down his targets, there is Detective Fanning (Mark Ruffalo), who is being called to the crime scenes and is starting to see a pattern and a possible explanation for all the “random” killings. Working as Fanning’s partner is a guy you may recognize, Peter Berg, who has now made a name for himself directing some pretty big films.  While I understand the need to bring in the detectives, this does take away some of the tension developing with Max and Vincent.

Stuart Beattie is responsible for the script, and he’s gone on to make some successful films, but Collateral is definitely his best work.  The dialog with pretty much every character in the film just works so well, and the way he crafts this narrative to take place over a matter of one night it actually has a good rhythm and doesn’t feel forced.  The only grudge I feel anyone could maybe have is how Annie factors into the story. It’s the only part that feels like a reach, but even early on in the film Max and Vincent have an insightful conversation about fate.

For me, this was the last great Michael Mann film.  He went on to do Miami Vice the movie, Public Enemies, and Blackhat. Though I did like those movies, they just didn’t make the same impact on me.  The energy in this film just showed this was a filmmaker who loved what he was doing, and everyone involved just delivered great performances.  I love the cinematography. Sure, HD cameras have gotten better, but I do enjoy the realism that was captured, and that’s part of what I love most about a Michael Mann film.  I love the long-take action sequences, the club scene where Vincent just is on a war path to reach his target; Cruise just nails this sequence as he works his way through the crowd.  This is just a movie that time has almost forgotten, and it’s a shame, because it shows how good an action film can be without huge special FX.

Collateral is presented in its original aspect ratio of 2.35:1. The ultra-high-definition 2160p  image is arrived at by an HEVC codec with an impressive average bitrate of 65-70 mbps. This film comes out a little bit of a mess in UHD. This was an early attempt at digital filmmaking and suffers from that pioneering path. Paul Cameron was the original cinematographer and quit about three weeks into production because he was finding issues with the camera system. There is an absolute crushing of colors that has a lot to do with early bandwidth, and the cameras did not handle contrast very well. The problems were so severe that Panavision ended up using Cameron’s complaints as the springboard for the improvements made on their later Genesis system. HDR is good at both color and contrast but really can’t rescue those obvious deficiencies in this release. There is a bit of digital noise in several early scenes. Another issue appears to deal with frame rates. There are several glaring problems. When Cruise is running up the stairs and when Foxx ends up blown out of his cab by the falling body, both have serious frame issues. So much so that at first I thought someone must have broken into the house and did nothing but change my monitor settings. Most of us in this business keep all of that smooth motion processing off, and it looked like my settings slipped. But a quick check of the front door camera and the monitor’s settings showed no one broke in and mucked with my settings. It was Michael Mann all along, and while he didn’t break into my house and home theatre, what he did here should be a crime anyway.

There’s only a DTS-HD 5.1 track identical to the Blu-ray. It might not have mattered. I’m an Elton John fan, so I love looking for scores from James Newton Howard, but he might as well have phoned this one in. Mann, as per usual, ditched most of the score for source music that is quite uneven throughout. I hate having to ride my volume control, but I did a few times here. Often it’s mixed too loud, so dialog can get a bit lost. The subs aren’t even quite as impressive as I expected except on a couple of the more percussive source songs. It’s clear enough but not up to the level that I’ve come to expect on these UHD releases.

(Audio Commentary with Director Michael Mann)  The commentary is from the when the film was first released on DVD, but it is packed with information from how Mann likes to construct scenes, to working with the actors and the character motivations to even unique details of filming locations in LA.  This was also one of the first major film releases shot digitally, and he gets into detail about why he chose to shoot that way.

City of Night: Making of Collateral (40:59) This is a great look into the making of the film that is unique from your typical BTS featurettes.  With this we get to see the extensive training that Tom Cruise and Jamie Foxx went through to pull off their performances, from intense physical training Cruise went through to Foxx meeting with several cab drivers and spending time on a race track with the town car.  Then we see the effort in shooting the film with interviews with cast and crew.

Special Delivery: (1:09) A fun little segment where Michael Mann had Tom Cruise pretend to be a FedEx driver for a day to learn to blend in and interact with people without them recognizing him.

Deleted Scene (1:57) Michael Mann gives commentary for a scene that has Vincent making Max drive through LAX to get rid of a surveillance tail.

Shooting on Location: Annies Office (2:34) A brief look showing why Michael Mann chose to shoot in an office building in one of the films climactic scenes.

Tom Cruise and Jamie Foxx Rehearse (4:13) This isn’t something we get to see often, where we have raw footage of actors just going through a few scenes together before being on set and in costume.

Visual FX: MTA Train (2:27) A little insight into why Michael Mann chose to do the train scene on green screen, giving viewers a glimpse into how meticulous the man is with even background footage that most don’t even notice.

For those who haven’t seen Collateral, I feel you are in for a treat.  This is an action film with a great script and has great performances.  The movie may be 16 years old, but the film doesn’t feel dated.  If you’re looking for a good time, crank up the volume and enjoy this one. I doubt you’ll be disappointed.

Brent Lorentson is a horror writer and film critic based out of Tampa, Florida. With a BA in Digital Film, he co-wrote and co-directed Scavenger Hunt. His short stories have appeared in various horror anthologies. In 2019 his short script Fertile Blood will be a part of the anthology horror film Slumber Party. He is currently working on his first novel A Dark and Secret Place set to be released in late 2019. Favorite Films: Taxi Driver, Fight Club, I Saw the Devil, The Wild Bunch, Dawn of the Dead, A Clockwork Orange, Pulp Fiction, Heathers, The Monster Squad, and High Fidelity.
Holiday Gift Guide Spotlight: CBS Presents Hawaii Five-O (2010): The Complete Series Mario Puzo’s The Godfather, Coda: The Death of Michael Corleone (Blu-ray)