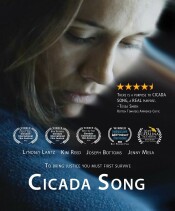 I think I see your problem. You have this list. It’s a list of people you need/want to buy a Christmas gift for. The trouble is that they’re into home theatre, and you don’t know Star Trek from Star Wars. You couldn’t tell a Wolf Man from a Wolverine. And you always thought that Paranormal Activity was something too kinky to talk about. Fortunately, Upcomingdiscs has come to the rescue every Christmas with our Gift Guide Spotlights. Keep checking back to see more recommendations for your holiday shopping. These gift guides ARE NOT paid advertisements. We take no money to publish them. With conditions as they are, shopping won’t be easy this season. The nice thing about discs is that they’re so easy to get from places like Amazon that you can give a great gift and stay perfectly safe while you do it. One of the neatest little items I’ve come across this year is a small-budget film called Cicada Song. I reviewed it earlier in the year and have since gotten to talk with the film’s director, Michael Starr. He’s one of the good guys, and you should slide the film under a tree or two. You’ll surprise that film fan who might never have even known about this one.

The Blu-ray offers a wonderful image and audio presentation. It was like seeing the film for the first time for me. There is about an hour of extras that includes a 25-minute behind-the-scenes feature and a long list of short interviews with cast and crew. This is one of those gems I occasionally find that put the spice into this job. Here’s a little bit about the film:

The idea appears simple on the surface, but it is not. Karen is played by Lyndsey Lantz. She’s had to hold her head up because she has a tough time in this rural setting. She’s gay and suffers the barbs from an ignorant segment of the local population. She manages a farm operation for a couple who aren’t necessarily what they appear to be. If I’m being vague here, it’s because there is so much nuance to this story that telling you too much will risk ruining what the film works so hard to accomplish. Karen first hears that a young girl has gone missing. She starts to ask questions and discovers the missing child might be related to one a year ago. Before long, her lover Annabelle (Mesa) has also gone missing. She ends up asking the wrong questions and eventually left for dead in the middle of a wood, where she shows incredible strength and determination to survive. Without revealing too much, I can tell you that you shouldn’t be too quick to figure out the good guys from the bad guys. Things aren’t always what they seem. Lyndsey Lantz does a fine job as Karen and has to carry a lot of the weight of the story both in the “present” and flash-forward scenes. Other standouts in the cast are Kim Reed as the owner of the farm Karen manages and Jenny Mesa, who plays Annabelle.

Again, this is the kind of film that is best left with little of the plot revealed. The film’s style and ambition are what captivated me throughout. Writer and director Michael Starr sprinkles the film with moments of Karen picking herself up and roaming the wilderness, obviously injured and disoriented. Starr uses these sprinkled moments as beats to the film’s rhythm, and if you’re paying attention, he’s telling you something’s happened here in the story or is about to. He manages to cut across plenty of social issues. The film takes place in locations in L.A. and Missouri, and there is a relatively large cast for such a limited-budget attempt. How he fits all of this into a small-budget package is a bit of a mystery to me, and I had a chance to talk to him about it all. He still manages to deliver some solid production values and even finds enough money to include a lot of music in the film, which he cleverly uses to enhance the changing moods of the film. In most cases a director in his position would consider themselves fortunate to get to pick one or two things from that list. Somehow Cicada Song delivers all of them without compromise. And he doesn’t bloat the film with an unnecessarily long running time. I don’t mind even a bad film, but I hate when filmmakers waste so much more of my time than they needed in order to satisfy some ego or blind ambition. It’s a tight story with nicely laid out beats and characters that appear real and multi-dimensional. All of the budget is on the screen. Someone must have told him, “Don’t spend it all in one place.”

Be sure to check out my interview with writer/director Michael Starr. Just bang it here: Michael Starr Interview

Gino Sassani is a member of the Southeastern Film Critic's Association (SEFCA). He is a film and television critic based in Tampa, Florida. He's also the Senior Editor here at Upcomingdiscs. Gino started reviewing films in the early 1990's as a segment of his local television show Focus. He's an award-winning recording artist for Omega Records. Gino is currently working on his 8th album Merchants & Mercenaries. Gino took over Upcomingdiscs Dec 1, 2008. He works out of a home theater he calls The Reel World. Favorite films: The Godfather, The Godfather Part II, The Body Snatcher (Val Lewton film with Karloff and Lugosi, not the pod people film), Unforgiven, Gladiator, The Lion King, Jaws, Son Of Frankenstein, The Good, The Bad And The Ugly, and Monsters, Inc.
The Dark and The Wicked (Blu-ray) Honest Thief