The Dark and The Wicked (Blu-ray)

Posted in: Disc Reviews by Brent Lorentson on December 17th, 2020 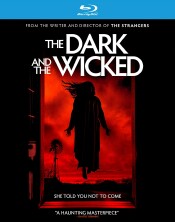 When I first saw The Strangers, I have to admit I was pleasantly surprised by how much that movie stuck with me.  Sure, there have been plenty of home invasion flicks over the years, but The Strangers is definitely right up there with the best like Funny Games and Inside.  Writer and director Bryan Bertino is one of modern horror’s underappreciated creators. He is so good at keeping things simple, utilizing small casts and single settings, and keeping the horror relatively grounded in reality.  With The Dark and The Wicked, he gives us his best work to date, and for me one of the best horror films in years. Personally, this is my favorite new horror release since 2016’s The Autopsy of Jane Doe.  I’m sure plenty of people will disagree with me, and for as much love as I have for Hereditary, what The Dark and The Wicked did that honestly very few horror films manage to do is genuinely get under my skin.  This movie actually creeped me out, and it didn’t use big gory FX or go for cheap jump scares. This literally is a master class in creating tension and delivering a story to audiences that starts off in familiar territory but takes us in new and fresh directions.

“You shouldn’t have come here.”

Louise (Marin Ireland) and her brother Michael (Michael Abbott Jr.) are returning to their Texas farm to spend time with their father who is in his final days.  Their mom has been taking care of her husband with the aid of a nurse that comes by during the days, but the grief has obviously taken a toll on their mother. The first of many unsettling demises falls upon the mother. All I’ll say is this was a cringe-inducing scene/sequence, and this is when the siblings start to wonder if there may possibly be something else happening at the farm beyond their mother’s grief.

We’ve seen grief being used as a plot device before with Hereditary, and The Dark and the Wicked takes it and runs with it.  Early on we get that the siblings have not been back home to see their family for some time and that their relationship has been strained.  For many this may hit close to home, I’ll admit I could empathize with these characters more so than in your typical horror film.  But where this film steps up its game, it indirectly explains why evil would prey upon a family. Usually we see it’s someone unlocking a curse or messing with a Ouija board, but here we see evil depicted as a predator that simply preys upon the emotionally vulnerable, those already broken, where it can simply take those emotional wounds and exploit them.  This isn’t rubbed in the viewer’s face. It’s done so subtly, and that for me is what I found so effective.

What was most effective is the film’s sound design.  The family lives on a sheep farm, and what I loved was how at night the use of the wolf howls, insinuating the predators in the distance, while they may not be seen, they are always there. Then there is a moment where a character is in bed and they hear the click of the light switch to turn on their light.  It’s so simple, but this is just so effective, conjuring up thoughts as a kid when I’d be certain something was lurking in the darkness and any suddenly sound would trigger my fear to terror, only in this case we see it happen.

At the film’s core this is a possession story, but it’s done in a way that hasn’t quite been depicted like this before, and what is even more refreshing is how it avoids the typical tropes we see in the sub-genre. There is a lot of religious symbolism here, but the main characters have no connection to the church and very clearly state that they don’t believe.  Even when a priest comes into the film and you think the film is about to fall down that familiar path, the film jerks you in a new direction.  My only major gripe with the film is with how it all ends. While it fits with the story being told, it does seem a bit abrupt, and definitely left me wanting a little more. Sometimes I’d say an underwhelming ending can just deflate my view on the film, but here the journey we see these siblings take and the scares this film managed to evoke and keep my heart racing, I’m more than happy to overlook this. To be fair, while talking to a friend about it, we agreed that despite being a bit abrupt, it mostly fit the overall arc of the story.

The Dark and the Wicked is presented in the aspect ratio 2.39:1. The 1080p image is arrived at with an AVC MPEG-4 codec at an average of 20 mbps.  A good portion of this film is shot in the dark or in low-light situations, but the black levels are on point and allow for some nice separation.  A lot of this film depends on the horror you can’t see, so the low-light situation plays to its favor, and some of the shadow work is downright creepy. There are some beautiful scenic shots where we see the farmland at dusk, and we do get to see some excellent cinematography. Colors don’t really pop in this film, and that’s an intentional choice that makes a lot of sense, as it fits the tone of the film.

The DTS HD-Master Audio 5.1 track is pretty damn creepy. The sound design of the film is what makes this film work so well, from the footsteps in the darkness, the sickly coughs of the father, to a simple light switch being flicked — all these are utilized to create some amazing tension. Then there is the subtle haunting score; it just works so well.  There is a lot of bass in this film and the use of drones that feed into the unease.

Fantasia Q & A with Marin Ireland and Michael Abbott Jr. (36:31)  Because of COVID, the Q&A was done through Skype, and because of this the interview does have its moments of awkwardness due to timing and them talking over one another.  Would have been nice to have heard from the writer and director, but the two actors do cover a lot of ground.

I love this movie. SHUDDER is doing such a great job at finding new content and getting it out to their viewers.  Because this was released to their service, this will be available to many horror fans, and this Blu-ray will only offer an opportunity to more fans to check this film out. It’s like the perfect/worst film to watch this holiday season, and because of COVID this film may hit closer to home with loved ones getting sick and being so far away and feeling helpless to do anything. This will be a movie that will eventually make it onto Best of Horror lists. It’s a slow burn, but this movie is definitely a must-watch for horror fans.

Brent Lorentson is a horror writer and film critic based out of Tampa, Florida. With a BA in Digital Film, he co-wrote and co-directed Scavenger Hunt. His short stories have appeared in various horror anthologies. In 2019 his short script Fertile Blood will be a part of the anthology horror film Slumber Party. He is currently working on his first novel A Dark and Secret Place set to be released in late 2019. Favorite Films: Taxi Driver, Fight Club, I Saw the Devil, The Wild Bunch, Dawn of the Dead, A Clockwork Orange, Pulp Fiction, Heathers, The Monster Squad, and High Fidelity.
Yellowstone: Season Three (Blu-ray) Holiday Gift Guide Spotlight: Cicada Song on Blu-ray