Posted in: Disc Reviews by Jeremy Butler on January 13th, 2021 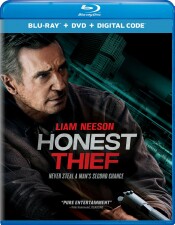 Well despite being typecasted, Liam Neeson delivers an entertaining film with Honest Thief. The film depicts the story of a prolific bank robber who after falling in love, decides to turn himself in exchange for a reduced sentence. A caveat of this deal is that he must also return the money he stole; all nine million dollars of it. It isn’t hard to figure out where the story goes from here. Naturally, the FBI agents assigned to the case immediately get greedy upon seeing the money and make plans to keep it for themselves. Where the film deviates is when they agents try to kill him, they are caught by their boss and forced to kill him and frame Neeson for the crime. I was prepared for the greed, but not the murder of one of their own, so that provided a decent twist, or it would have had it not been one of the big selling twist featured in all the promotional trailers for the film. Sometimes Hollywood ruins a good twist by providing too much information in the trailer. Rounding out the cast is Kate Walsh, Jai Courtney, Robert Patrick, and one of my favorite actors, Jeffrey Donovan.

To briefly summarize again, the film follows former Marine and demolition expert Tom Dolan (Neeson), a master thief whose precision and dedication to his craft has earned him the moniker, the “In-and-Out Bandit.” For years, he has operated without detection and even the threat of being caught until he meets Annie (Walsh), a recently divorced grad student who he falls head over heels for. Wanting to spend the rest of his life with her without the risk of future imprisonment looming over his head; Dolan stops robbing banks and contacts the FBI to make a deal to turn himself in and the money in exchange for a reduced sentence.

Given the high volume of crank calls they receive from people claiming to be the bandit, supervisory agents Sam Baker (Patrick) and Sean Meyers (Donovan) pawned the case off on junior agents Nivens and Hall (Courtney and Anthony Ramos respectively). Once Dolan has provided proof of identity (i.e. the money), it takes merely seconds for the agents to plan to take the money for themselves. However, while attempted to deal with Dolan they are surprised by Baker, resulting in his murder and the subsequent framing of Dolan. Dolan now a man on the run, must prove his innocence while evading the full force of the vengeful FBI, while also getting even with the agents that framed him.

So I know I said brief and it was anything but that, I feel that was a lot of important information for you to have regarding this movie. Don’t worry, I didn’t spoil anything because all this information is already available in the promotional trailer. As I mentioned earlier, I really believe that the killing of Agent Baker would have added an additional element of surprise to the film if they just held that back. I understand the need to provide enough intrigue to persuade the audience to see the film, but I still think that could have been accomplished while holding that part back. The simple truth is the film is not breaking knew ground, the concept of the framed man is well utilized trope in the movie business. What keeps the trope alive is the envelope that it is wrapped in. So I believe that Baker’s murder could have greatly improved the overall suspense of the film.

That aside, I did enjoy the film. Despite not breaking new ground, there are still multiple elements to the story to be enjoyed. For instances, the characters of Dolan and Meyers are basically mirror opposites of one another in regards to their view of relationships. A running theme of the film is the everyone’s skepticism that a person would give up a fortune for the love of a woman. This film does a good job with this theme, the right amount of skepticism, but the chemistry between Neeson and Walsh makes it believe about. There is an easy rapport between the two of them. This rapport is best seen following Neeson confession about his past, when he attempts to make light of the situation to Walsh chagrin. Something else that plays well is the redemption arc for one of our antagonists, which made the character more relatable and humanized, what could have easily been a one-dimensional character.

I doubt Honest Thief would have been a box office winner even pre-COVID, but I have no trouble believing that the audience would have found the film moderately entertaining. I had no trouble myself. I recommend giving the film a chance if you are a fan of suspense and action. You aren’t likely to be disappointed.

Jeremy Butler is a film school graduate of the International Academy of Design and Technology. He is been writing for Upcomingdiscs since 2012; however, movies have played a big part of his life for much longer. Favorite genres include horror, science fiction/fantasy, and comedy. Favorite movies are V for Vendetta, Boondocks Saints, Kiss Kiss Bang Bang, and The Godfather.
Holiday Gift Guide Spotlight: Cicada Song on Blu-ray The Twilight Zone (2019): Season Two