Posted in: No Huddle by Brent Lorentson on January 14th, 2021 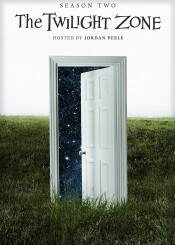 The Twilight Zone is simply one of those pop culture staples that everyone knows about even if they’ve never seen a single episode. Because of SYFY channel I’ve gotten to see the original show as well as the reboots that would follow. While I’m not as passionate about the anthology series as others, I certainly can appreciate its impact on the not just the sci-fi/horror genre but the history it’s had on television as well. I was curious about this new incarnation of The Twilight Zone, but I was less than enthusiastic about Jordan Peele being involved with the show.  As much as I’m a fan of Key & Peele, his foray into horror and sci-fi has left me more than underwhelmed. Being a fan of anthologies and with a little bit of curiosity, I went into Season 2 of The Twilight Zone with an open mind, and the result is a bit of a mixed bag.

My biggest complaint has more to do with the overall visual style of the show. I’m really not liking the desaturated look for every episode, but what’s more frustrating is the show’s overuse of negative space in the frame. It’s obviously a conscious decision to have so many shots with so much head space or the focus of attention on a third of the screen. Sometimes it works for the scene, but a majority of the time it just looks like pretentious garbage. If it seems like I’m being harsh, well, I’m glad, because cinematography 101 should be: understand the value of focusing on the subject. Sure, many other directors and camera ops can get away with this, but it’s not something that should be used all the time.

As for the quality of the episodes, honestly, a majority of them are fun and entertaining. The opening episode “Meet In The Middle” is a fun way to start of the season as we meet Phil (Jimmi Simpson), a lonely guy who suddenly is able to communicate with a woman in his mind. This long-distance relationship evolves in a fun way as we see him get to know this mystery woman who apparently lives hundreds of miles away. They can’t explain this unique psychic connection, but they both seem to embrace their bond. Because this is The Twilight Zone we know things are going to go sideways, and though it’s slightly predictable, it’s still fun watching this play out.

My favorite episode is “Among The Untrodden”. This is an episode I wish was its own film and honestly felt like a better sequel to the movie The Craft than the forgettable nonsense that released last year, and this didn’t even have witches. This episode is about Irene (Sophia Macy), who is a new student at an all-girls’ boarding school, and she has a lot of interest in psychic abilities. Irene wants to do a science project to prove or disprove whether the ability exists, and to her surprise she discovers one of her classmates may have these abilities.  The writing in this episode is great; so much is executed in a short amount of time that it doesn’t feel rushed, and the characters have time to develop and have arcs that don’t feel rushed or used as a means to just move to point A to point B in the story. It was wise to place this towards the middle of the season, because having it sooner would have really messed with the expectations for the audience.

Another favorite episode of mine I noticed didn’t score so well on IMDB, but I felt it was a fun little romp. “8” takes us to what I believe is the Arctic Circle where a group of scientists discover a creature that can possibly help mankind, but this creature has plans of its own.  This is the only episode that really has a straight-up horror vibe, and it comes across as a B-movie version of Alien, and I make this comparison with the most geek-filled respect. Sure, this could easily be expanded and watered down to be a SYFY movie original, but keeping this episode short, gruesome, and sweet is what made this work.  Is it a bit convoluted when it comes to the creature’s intentions? Of course it is, but that’s part of the episode’s charm that really calls back to the alien panic that was around in sci-fi cinema during the 50’s. Joel McHale puts in a fun performance despite it being a more serious role.

When I mentioned that the episode “8” reminded me of Alien, well, that’s sort of a running problem in this season of The Twilight Zone, how episodes seem to be short remakes of past movies. Downtime seemed to be a boring take on Total Recall and The Matrix; Try, Try was like a dark take on Groundhog Day, and then The Who of You was like a crime-story take on the film Fallen.  While I wouldn’t go so far as to say this was a deal breaker for my thoughts on the season, but it did make me wonder if they were struggling so much for genuine original stories and this is only Season 2, what will happen further down the line?

The last episode, You Might Also Like, is the only episode I can say I simply didn’t like.  I mean, this one was a chore to sit through. Despite that it had a good idea about aliens using mankind’s obsession with consumer goods to control us, the episode just simply missed its mark.

Overall I had fun with this season, and there are definitely some episodes here that I’ll revisit down the road.  Right now there are simply so many anthology shows that I feel that if The Twilight Zone wants to remain a contender, it’s going to have to step up its talent and possibly bring in a new batch of writers with some fresh ideas.  The show isn’t bad, but it’s definitely not up to snuff with its predecessors.

Brent Lorentson is a horror writer and film critic based out of Tampa, Florida. With a BA in Digital Film, he co-wrote and co-directed Scavenger Hunt. His short stories have appeared in various horror anthologies. In 2019 his short script Fertile Blood will be a part of the anthology horror film Slumber Party. He is currently working on his first novel A Dark and Secret Place set to be released in late 2019. Favorite Films: Taxi Driver, Fight Club, I Saw the Devil, The Wild Bunch, Dawn of the Dead, A Clockwork Orange, Pulp Fiction, Heathers, The Monster Squad, and High Fidelity.
Honest Thief The Cleansing Hour