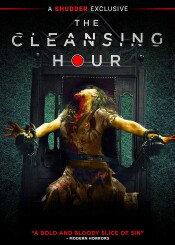 I was very much impressed with the quality of this film. Of late the quality of horror films that I’ve reviewed have not been great, and this film helped to restore my faith in the genre. While I am past the era of these types of movies scaring the bejesus out of me, I still admire a creative story that isn’t completely predictable. There are some elements of the film that were somewhat predictable, but overall the premise and story quality kept the project from being stale. The film reminds me of what Terrence Howard said in Four Brothers: “Keep knocking on the Devil’s door long enough and sooner or later someone’s going to answer you.” Great line and sound advice, which this film appears to expand upon. While the film is probably still falls into the B- movie category, the production quality and diligent work of the cast ensures that it falls into the higher spectrum of the B-movie category. The film features Ryan Guzman (television series 9-1-1) as a priest specializing in exorcism for his many followers on social media. As you can probably guess, he is far from the real deal and looking to catapult his little production into a massive following and huge payday, when he comes face to face with a real deal demon and he has to actually practice what he’s been pretending to preach. Rounding out the cast is Kyle Gallner, another television fixture best known for his performances on Veronica Mars and Smallville.

The film opens up right in the action, as Father Max (Guzman) works tirelessly to free an innocent man possessed by a demon. After a momentous struggle, the man is freed in front of an audience of thousands on social media. Then it’s revealed that the entire ordeal was fake and that Max is not a real priest, but an actor hoping to tap into a niche market. The whole setup is the brainchild of Max and his childhood best friend Drew, in order to make a profit. Drew is hoping to expand their enterprise, while Max is merely hoping to grow his own hype. It is abundantly clear that Max is more self-serving than Drew, who has unwavering loyalty to Max for reasons that become clear later in the film.

During their next staged hoax Drew’s fiancé, Lane, has to step in when their original exorcism victim (i.e. paid actor) is a no show; Lane inexplicably becomes possessed by an actual demon. Streaming to their thousands of fans, the demon wreaks havoc on the crew as well as Max as it forces him to reveal his innermost truths, from some of which there will be no coming back. As his popularity grows, so does the risk to their lives, as Drew and Max must work together and fall back on everything that they pretending to be to save Lane and themselves. The show is no longer fake.

While I was expecting the turn from fake content to real danger, the reveal still had some intrigue as the demon wasted no time showing the depth of its power with the act of immolating a member of the crew. This really set the tone for the quality of the production, as it was very realistic and top-shelf. One of the film’s main triumphs is its pacing. As the story progresses, things just keep escalating from funny to horrific as we fully begin to comprehend how deeply flawed our protagonist is. Granted, it was clear early on that he was a bit on the selfish side and not above taking advantage of the unflinching loyalty of his best friend. However, there is a secret that is eventually revealed that has the potentially to wreck their lifelong bond, and of course it is saved for last. But I’m getting ahead of myself. The most important portion of the film is the journey to this reveal, especially for the audience, who we see are glued to their seats even after Max admits that the production is a hoax. This is another thing that pays off greatly in the end, as the endgame is revealed to be much more devastating than our protagonist could have ever comprehended.

The most intriguing theme for me was the use of social media. A televised webcast of a real-deal exorcism? It’s no wonder that the audience couldn’t look away. It also put a modern twist on an idea that could have very easily been stagnant, but the incorporation of modern themes keeps the film relevant, even at the rest of everyone’s soul. Another intriguing tidbit was the fact that this feature film was originally a short film directed by the same man directing the film that I have the privilege of reviewing. As another treat, you can actually find the short film in the special features of this disc. I encourage you to give that a look too.

Jeremy Butler is a film school graduate of the International Academy of Design and Technology. He is been writing for Upcomingdiscs since 2012; however, movies have played a big part of his life for much longer. Favorite genres include horror, science fiction/fantasy, and comedy. Favorite movies are V for Vendetta, Boondocks Saints, Kiss Kiss Bang Bang, and The Godfather.
The Twilight Zone (2019): Season Two Toys of Terror