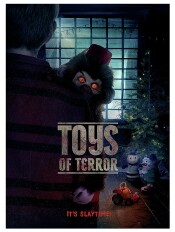 “You will survive Christmas in the mountains. I promise”

Someone should have told that character about making promises that you can’t keep. In this horror film, which felt more like a dark comedy if you ask me, a newly formed blended family and their au pair find themselves doing battle with a group of evil toys. That’s right, you read correctly, I said toys, and on Christmas no less. Now, the premise of evil toys is nothing new. I for one still can’t look at a Chucky doll without internal feelings of dread; however, where those films were able to instill fear, Toys of Terror just doesn’t do it, largely due to the film’s overall pacing. It just takes too long to get off the ground. Plenty of sizzle, but by the time we get to the steak, much of the runtime has been depleted and all the intrigue has bubbled out. While it is not the horror film that I expected, there were still some elements of the film that were worthwhile despite a bit of a lackluster conclusion.

The film has one or two familiar faces, such as Georgia Waters, who’s most recognizable from her stint on Freeform’s recently cancelled series Siren, Kyana Teresa of Shadowhunters fame, and serial television guest star Dayo Ade. While none of these talents are what you can call big-time, their performances in the film keep it from becoming a total waste of time and energy. Also notable is Verity Marks, who is a new talent, but without question is the breakout star of the film, as she serves as one of the film’s main perspectives. Granted as she for the most part is playing the role of the moody teenager, much of the comedy relief for the film comes from her being snarky. Without, the film would just have a lot of average-level CGI.

As stated earlier, I think my biggest issue with the film was its pacing. Nothing of real significance occurs until well into the second half of the movie. There’s plenty of innuendo, and it’s clear that the toys are laying the ground work for the film’s conclusion, but there’s too much bluster for the minimalist amount of action that we got. As a result, the evitable confrontation is rushed and ultimately unsatisfying. It’s like when you wait all day to eat because you are going to a party and find out that they aren’t serving food, only drinks.  Another thing to suffer was the explanation of the origins of the toys and their motivation. This is rushed through; basically if you blink, you could miss Teresa’s character explaining her research of the house. There was another opportunity to fit the information in earlier when Mark’s character looked the house up on the internet, but this opportunity was passed over in order to build suspense, if I had to guess. In my opinion that was a mishandling. I would have seized that opportunity and built on it with a confrontation between the characters.

The film does put some effort into character-building, particularly by highlighting the struggles that each character was dealing with. There are plenty of emotional scars touched on in the film, which does provide some depth and keep them from being one-dimensional.

In summation, the film is not a complete loss, but if you are hoping for a film to terrify you, I don’t think Toys of Terror will deliver on that. Now, there are worse ways to spend time; even so, this film probably wouldn’t be my first choice for entertainment. Despite that, there are still one or two things that kept the film interesting.

Jeremy Butler is a film school graduate of the International Academy of Design and Technology. He is been writing for Upcomingdiscs since 2012; however, movies have played a big part of his life for much longer. Favorite genres include horror, science fiction/fantasy, and comedy. Favorite movies are V for Vendetta, Boondocks Saints, Kiss Kiss Bang Bang, and The Godfather.
The Cleansing Hour Snowpiercer: The Complete First Season (Blu-ray)