Posted in: Disc Reviews by Brent Lorentson on January 28th, 2021 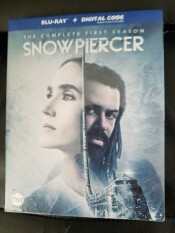 I’ll come out from the start and say how much I love the film Snowpiercer (2013). I was already a fan of Bong Joon Ho since I had seen The Host at a film festival, and I just thought his career would have exploded after the release of Snowpiercer. The tension created in that film as you see the tail section carefully move their way to the front of the train and the horrors they encounter along the way is engaging, and it speaks volumes.  The stories about cannibalism are heart-wrenching, and the violence is intense. You definitely feel the desperation and are rooting for the tail section from start to finish.  Sure, there was plenty of class warfare on display, but in the film it was very clear who was “good” and who was “bad”. Now we have a TV series inspired by both the graphic novels and the film, and this time those lines of good and bad are not so clear as it spins a new tale for us.  This isn’t simply a TV show version of the movie, which is something I’m thankful for, but instead this is another version of events that could have happened on this epic train that is essential to mankind’s survival.

The show kicks off with a brief introduction to the chaos as people attempted to board the train — the savage cold that was taking the globe into its grasp, gunfire exploding at the station, and the immediacy to board as the doors were closing and the train was about to depart.  Because I’ve seen the movie and that took place 17 years after the train’s initial departure, I was looking forward to an origin story to see how sections were established and how the stowaways were handled.  Unfortunately we don’t get to see that here either, and I’m a bit disappointed by that.  This time around the show starts off seven years from departure, and the divide in classes has already been established. The first episode throws so much at the viewer that a scene where you witness a passenger take their own life just sort of loses its impact. What disappointed me most is that the show starts off as a bland murder mystery, where a body is found mutilated and the only one who can solve the crime is a former homicide detective who resides in the back of the train.

Running the train on a person-to-person level is Melanie (Jennifer Connelly), who is the head of hospitality, but she is obviously more than that, as just about everyone on the train answers to her.  The only person higher on the chain of authority is Wilfred, the conductor and creator of the train that the passengers look upon as a deity, and Melanie seems to be the only one who can speak to him.  Worried the panic of a murderer onboard will create more unrest, Melanie is tasked with finding the killer and is forced to reach out to the tail section for help. Andre Layton (Daveed Diggs) is tasked with solving the vicious murder of a passenger who’s been dismembered and castrated.  In true Agatha Christie fashion, of course everyone is a suspect. Layton has been busy in the tail section as a rebellion has been brewing, and now getting access to more cars on the train, obviously he sees this as an opportunity to help his people in the tail section, so he reluctantly agrees to solve this murder.  From the get go I had problems with Diggs as a homicide detective. I really hated this casting; his performance was just too theatrical. This isn’t a surprise considering he was in Hamilton. As the show progresses and the story moves further away from Layton being a detective and more about him being a leader for the tail section revolution, Diggs definitely seems for suited in the role. But to be fair, this transition is nearly halfway through the season.

Connelly, on the other hand, does some great things with her character throughout the entire first season. I’ve always liked her, going back to her role in Phenomena aka Creepers all the way to Requiem for a Dream, but this role really allows her to show her range. There are other great performances in the show as well: Mickey Sumner as security officer Bess Till, and then Alison Wright who plays Ruth, Melanie’s 2nd in command in hospitality. Honestly, the female cast in this show is incredible and deliver some great performances. The dynamic between Melanie and Ruth is easily one of the more enjoyable ones to watch play out as things begin to unravel on the train.

Getting back to Layton’s journey through the first season, the first half of the season is really hit or miss, as the writers are attempting to tell a story while establishing the social dynamics on a train that’s 1001 cars long.  Forcing a love triangle just really falls flat in the first half of the season as we see Layton seem fickle between the woman he loved before life on Snowpiercer, and the woman he finds new love with on the train.  This just didn’t work for me, because obviously it was used as simple plot device and not a way to develop the characters.  I understand they want to show us relationships on the train are difficult, but in Layton’s case it just feels forced.  Where they did manage to strike a good balance is the relationship between Bess and Jinju (Susan Park) where they mix a little bit of the class structure, but as the rebellion brews on the train we see how it impacts the two of them.

As for the actual rebellion … while I’m not a fan of the first half of the season, the last half of the season is fantastic and has you gripped every second of the way.  The fight sequences are extremely well done, despite all the CGI blood.  But even better is seeing the dynamics on the train shift, and there are some really fun twists and turns over the course of the last five episodes.

What had me worried was just where will the story go? After all, Season 2 is about to premiere, and a third season is already planned.  I was worried that possibly the show could run out of steam just when I was becoming a fan, and in the last episode we get a glimpse of what the future may hold for the show, and I have to say this has definitely gotten me intrigued. This is a show that definitely had a rocky start but now I feel has found its path and has potential to be a great genre series. There is a lot that I haven’t gotten into simply because I don’t want to spoil the fun.

Snowpiercer: The Series is presented in the aspect ratio 1.78:1.  The 1080p image is arrived at with an AVC MPEG-4 codec at an average of 16mbps. The presentation of the film is a bit disappointing in the way of capturing detail. A good portion of the backgrounds are CGI, and just about everything outside of the train is CGI, and the quality of that ranges from decent to kind of bad. To be fair, this is a TV series, and basically you can see just about every penny the production had to spend is on the screen.  While it does have a robust color palette, defining the different classes on the train we see an assortment of colors in 1st class, but as it goes to the rear color is mostly stripped away. There is a bit of crushing going on, but it’s not distracting from the story.

The DTS-HD Master Audio 5.1 track is very well used to always remind you that you are on a train at all times. Aside from the ambient engine noise, the sound design sets you up nicely in the middle of the action where impacts are all around you.  The dialog is clear throughout, which is important for many of the sequences with a lot of dialog and characters talking over one another. For a television show, this is really well done.

Overview: (3:12) Basically this is a quick rundown of the plot, a more detailed trailer mostly.

Class Warfare: (3:02) Gets into the division of the classes from the front to the rear of the train.

Jennifer and Daveed: Behind the Scenes interview: (2:09) Calling this an interview is a bit much, as it’s really just a couple sound bites of the actors talking about the sets.

The Train: (5:56) This one let me down. I was hoping they would explain the scale of these train cars, since some seem huge and others claustrophobic. But it does get into the various cars on the train.

Behind the Curtain: Art of the Frozen World: (4:09) Dives into the effects used to bring the Snowpiercer to life.

The show definitely has a messy start, but eventually it does manage to right itself and does become a hell of a good time. The final four episodes are simply great television that had me engaged the entire time. If you liked the movie, I feel you’ll enjoy this as well; just don’t expect to see any similarities other than the class-warfare plot point. This brings us new fun characters to get to know, some to love and some to enjoy loathing. I doubt this will win any Emmys, but it’s definitely entertaining.

Brent Lorentson is a horror writer and film critic based out of Tampa, Florida. With a BA in Digital Film, he co-wrote and co-directed Scavenger Hunt. His short stories have appeared in various horror anthologies. In 2019 his short script Fertile Blood will be a part of the anthology horror film Slumber Party. He is currently working on his first novel A Dark and Secret Place set to be released in late 2019. Favorite Films: Taxi Driver, Fight Club, I Saw the Devil, The Wild Bunch, Dawn of the Dead, A Clockwork Orange, Pulp Fiction, Heathers, The Monster Squad, and High Fidelity.
Toys of Terror Batman: Soul of the Dragon ( UHD Blu-ray) (4K)