Posted in: No Huddle by Brent Lorentson on February 11th, 2021 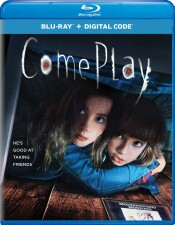 Come Play is the most recent film to be expanded to feature length following a successful short project. With the moderate success of Lights Out, it’s no big surprise that a studio would want to take a chance on Come Play, whose short film, “Larry”, worked as a prototype for the feature it would become.  This kind of thing happens quite often with genre projects, but sometimes you have to wonder is there really enough story to expand a 5-minute short into a 90-minute feature.  Using the addiction to technology and its ever-expanding AI features, there is plenty of story to be mined from this.  Recently there was the update to Child’s Play that had AI technology seeking a new best friend it would kill to have, and in that film, Chucky was able to manipulate the technology around him.  Come Play somewhat takes the same approach but instead creates a boogeyman for the age of modern tech. Then factor in that it’s a film under the Amblin umbrella, a company that is responsible for Poltergeist, ET, and numerous 80’s and 90’s genre classics … well, it’s hard to not have some raised expectations.

Oliver (Azhy Robertson) is a young boy who has autism. This has made his life at home and school rather challenging and has made it difficult for him to make friends.  At home he spends his time watching Spongebob on his phone while his parents fight.  It’s easy to feel for the young boy, and the performance Robertson delivers is quite impressive for his young age. Most importantly, though, from the start of the film these characters feel grounded, and the result makes for many intense moments.  It doesn’t take long for Oliver to find a children’s story that seems to just appear on his phone. The story talks about a creature that like Oliver is rejected by society and simply wants to find a friend.  The creature calls himself Larry, but though his intentions seem innocent enough, very quickly we discover he’s simply up to no good.  Then there is the struggling mother, Sarah (Gillian Jacobs). Despite all her efforts, she can’t seem to help her son, and her marriage is falling apart.  Her struggles with her son have even affected her friendships, so when her husband prepares to move out, she feels even more alone.

The dynamic of the mother and son really is what makes the film work and what kept me engaged; the problem is the story feels pretty familiar, almost like an Americanized take on The Babadook.  Despite the many similarities, I feel Come Play is actually a better-executed film.  That’s not to say the film doesn’t have some issues.  The first time we see “Larry” while Oliver is playing on his phone in his room, it does deliver a fun little jump scare; the problem is that the technique is used again and again, and the scares just become less and less effective.  Now there are some moments I really got a kick out of, and it has to do Sarah’s first interaction with Larry.  There’s a playfulness to some of Larry’s actions that remind me of some of the early scenes in Poltergeist, when the family is playing with the chair in the kitchen, for example.  There is a similar scene in Come Play, and everything seems promising, but the film just loses its momentum.

By the time the film reaches the third act and you feel the movie is just about to end, it seems to go on for what feels like about 10 minutes longer than is needed.  The urgency is wasted, and you can mostly telegraph where this is all going.  This is a bit of a bummer, and when the ending comes, I just felt a tad cheated.  What elevates this film from several other films like Slender Man, I’m definitely a fan of the style, and it definitely does remind me of the visuals delivered in many of the classic 80’s films.  The first half of this film holds up nicely.  Unfortunately many of the things that made the first half so good are recycled to death.  Even more frustrating is the lack of a rational explanation for why Oliver is being targeted.

The biggest takeaway from this film is how dangerous our obsession with technology can be in the hands of children.  Perhaps ghosts and demons may not be watching them, but plenty of hackers with the ability to manipulate our camera phones and deliver messages should be unsettling enough.  It’s the real threat that is more terrifying than anything Hollywood can conjure up with the supernatural.  Perhaps a more grounded route with this story could have been more successful; who knows.  I enjoyed the film for what it is, but despite its strong first half, it withered down to mediocrity.

Brent Lorentson is a horror writer and film critic based out of Tampa, Florida. With a BA in Digital Film, he co-wrote and co-directed Scavenger Hunt. His short stories have appeared in various horror anthologies. In 2019 his short script Fertile Blood will be a part of the anthology horror film Slumber Party. He is currently working on his first novel A Dark and Secret Place set to be released in late 2019. Favorite Films: Taxi Driver, Fight Club, I Saw the Devil, The Wild Bunch, Dawn of the Dead, A Clockwork Orange, Pulp Fiction, Heathers, The Monster Squad, and High Fidelity.
Doom Patrol: The Complete Second Season (Blu-ray) Freaky (Blu-ray)