Posted in: Disc Reviews by Brent Lorentson on January 30th, 2021 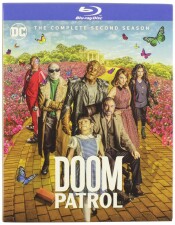 When it comes to the DC universe on television, I feel like Warner Bros. knows exactly what they are doing and truly understands the comics as well as their audience. Now that WB has merged with HBO, I was worried about whether some of the DC TV shows would continue on, since I’ve been impressed with the first two seasons of Titans and the first season of Doom Patrol.  I was even more curious about whether Doom Patrol could continue to deliver it’s WHAT THE F*** moments that were sprinkled throughout the first season. Now that I’ve come to the abrupt end that Season 2 delivered, I’m happy to say the show has managed to outdo itself.  One thing I want to get out of the way before I delve into this review: the season is only nine episodes long due to the pandemic, so the show does end with many story threads left wide open.

You think you’ve seen some weird and off-the-beaten-path shows? Well, Doom Patrol is without a doubt the most fun and unique show I’ve seen.  It makes Twin Peaks seem normal, and calling the show bonkers is putting it lightly.  Oh, and for those of you with young kids, you definitely may want to steer them clear of this show until you’ve seen what it offers. Where the first season delivered town-swallowing donkeys, asses with feet that can eat you, and talking streets, Season 2 steps up its oddball nature with sex ghosts and robots on ecstasy, and that is just a tiny glimpse at the oddball fun this show has in store for its audiences. I haven’t even gotten to some of the more absurd aspects of the show. But please don’t let this scare you off, because this motley crew of misfit superheroes are a hell of a good time to watch, and even more surprising is how lovable they all are.

The Doom Patrol is made up of Cliff (Brendan Fraser), a generic robot with the brain of a former race car driver, Rita Farr (April Bowlby), a former Hollywood starlet who after a freak accident can turn into a giant blob of flesh, Larry Trainor (Matt Bomer), a former pilot who after an accident become possessed by a force of radioactive energy, and then Crazy Jane (Diane Guerrero), who is filled with over 60 personalities each of whom have their own superpower. A more familiar character to mainstream audiences is Cyborg (Joivan Wade). They all live together in a mansion that somewhat looks like the Xavier’s school for the gifted from X-Men, but rather than a Professor X looking after them it is the mysterious Niles Caulder (Timothy Dalton). Really, at first glance this show is almost a DC version of X-Men mashed up with Guardians of the Galaxy, but really that doesn’t do the show justice, because it really does become its own unique voice.

Season 2 starts off following the aftermath of their fight with Mr. Nobody, and most of the Doom Patrol with the exception of Larry have all been shrunken down to the size of bugs and are living in a large diorama. With them is Niles’ daughter Dorothy (Abigail Shapiro), who has some mysterious powers that not only seem to keep her looking only nine years old but also powers that can wipe out the world … Oh, and she also has ape-like features. Also stuck with the Doom Patrol is Danny “The Town”, only now he’s nothing more than a brick.  The episode plays like a foul-mouthed episode of Honey I Shrunk The Kids, and it’s definitely a fun way to ease back into the show while setting up what the second season will be delivering.

What surprised me most about this season is how despite all its quirkiness there is definitely a lot of emotion going on as we see each of the characters dealing with the consequences of their actions from the past. Piggybacking on this as we see the Doom Patrol confront their mistakes and faults with their families we see them also coming to realize that they are not just a merry band of misfits, but they’ve become a family of their own. This isn’t as depressing or as boring as it may sound; seeing these characters reaching out and seeking redemption is something we don’t get to see enough of in these types of shows. What Brendan Fraser is able to do with his robot character is kind of amazing, along with the well-written dialog, it’s also his delivery and physicality with the role that manages to shine through despite the costume. Then there is the relationship with Niles and Dorothy; it raises many questions, some that even characters in the show bluntly ask, but we don’t ever quite get the answers we’re looking for … like why does she have ape-like features? But Timothy Dalton really brings in the emotion, and we can see the man’s conflicted torment as he accepts that what he’s done to the members of the Doom Patrol makes him a bit of a monster, but as I said, this season is about redemption.

The show has plenty of fun this season. Episode 4 ,“Sex Patrol”: all I’ll say is things get a bit crazy in this episode, and, well, it certainly has some memorable moments that will have you questioning what you just witnessed. Then there is the dream sequence Cliff has of him and Cyborg fighting crime as though they’re in an exploitation film Steele & Stone. There is a lot of fun to be had this season, and despite having less episodes, I feel this was the stronger season, and I feel this show is only going to continue on improving.

The Doom Patrol is presented in the aspect ratio 2.20:1.  The 1080p image is arrived at with an AVC MPEG-4 codec at an average of 20 mbps. Because of all the wild imagery and the use of digital and practical FX, it’s impressive how good this looks on disc.  There are episodes with entirely white backgrounds, to an assortment of bright colors to dark and shadowy realms, and all of it comes through with plenty of detail.  There are times when the reds seem to pixillate a bit, but it’s nothing distracting. Even the FX that are clearly overly digital kind of works with this show, because everything is so over-the-top. Over the course of this season there are moments where they play with different styles of TV shows, the added effort to go from grainy exploitation to a slick spy drama was fun despite how short-lived it was during the episodes.

The DTS-HD Master Audio 5.1 track is very well balanced between the heavy dialog moments and the over-the-top action sequences. The sound design is well done here, especially when handling things from various periods, perspectives, and worlds.  This season is definitely more dialog-heavy, but there are definitely some well-done atmospheric sequences, like moments in the well with Jane or when Cliff gets shot out into space.

The Magic of Make-Up (9:09) Here we get a look into the practical effects and makeup used to bring the various characters to life.

Come Visit Georgia PSA: (2:18) Pretty much a quick interview/commercial talking about how Georgia was a great place to film the show.

With there being so many superhero shows and movies out there, Doom Patrol is something fresh that shakes up the genre in all the right ways. Of all the DC shows, this is my favorite. I simply love these characters, and I love how this show manages to have so much heart but not take itself too seriously. I’m ready for Season 3.

Brent Lorentson is a horror writer and film critic based out of Tampa, Florida. With a BA in Digital Film, he co-wrote and co-directed Scavenger Hunt. His short stories have appeared in various horror anthologies. In 2019 his short script Fertile Blood will be a part of the anthology horror film Slumber Party. He is currently working on his first novel A Dark and Secret Place set to be released in late 2019. Favorite Films: Taxi Driver, Fight Club, I Saw the Devil, The Wild Bunch, Dawn of the Dead, A Clockwork Orange, Pulp Fiction, Heathers, The Monster Squad, and High Fidelity.
Batman: Soul of the Dragon ( UHD Blu-ray) (4K) Come Play (Blu-ray)