Posted in: Disc Reviews by Brent Lorentson on February 12th, 2021 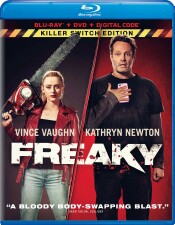 Despite the pandemic going on, 2020 managed to deliver when it came to the horror genre. The Invisible Man and The Dark and the Wicked were definitely some of the highlights, and then there was Freaky, a horror comedy that was delivering a twist on the body-swap story.  I’ll admit I was a little hesitant with embracing this idea, but when I saw it was being helmed by Christopher Landon, who brought us the Happy Death Day films; well, it gave me a little more confidence.  This is one of the few films that managed to get a theatrical release, but I’m still a bit hesitant on actually returning to the theaters.  Now that I’ve seen the film, I have to admit I’m a little bummed I didn’t get too see this with an audience. This is definitely one of those films that is a little more fun when you see it with an enthusiastic audience.  It’s pretty much Freaky Friday meets Friday the 13th, and, well, slashers always tend to play better with crowds.

From the opening sequence you pretty much know what you’re getting into.  It starts up like a very standard (clichéd even) situation with teenagers talking about a local serial killer and whether homecoming will be cancelled because of him.  How this sequence plays out reminded me of Scream, mostly in how it was self-aware and how that opening sequence with Drew Barrymore stands alone a well crafted cinematic slice of horror.  From the get-go, the humor is well mixed with some nicely done gore effects.  What’s slightly problematic, and what I feel some horror fans may take issue with, is that the film is very much a riff on the mainstream 90’s horror style.  It’s really my biggest issue, but I’m slightly more forgiving of this, because this is a style choice that’s obviously done in a tongue-in-cheek manner.  As a reminder, Vince Vaughn also played a serial killer in the 90’s when he took on the role of Norman Bates in the awful remake of Psycho.  Thankfully, just from the opening sequence alone, Vaughn redeems himself and actually plays a great menacing killer.

Then there is Millie (Kathryn Newton). She’s the quiet, shy girl that we know from the get-go will eventually have to go toe-to-toe with the big bad serial killer.  Newton does a great job of bringing innocence and sweetness to her character. Why anyone would bully this girl is a bit of a stretch, but she definitely has some issues to work through.  The family dynamic with her mom being an alcoholic and her older sister being a deputy definitely adds some appreciated depth to Millie; then factor in that the family is recovering from the death of her father — how can you not want to root for this girl?

When it comes to the reasoning behind the body swap, sure, it’s a bit of a stretch, but this isn’t a movie attempting to steep itself into realism; it’s about having fun, and when that swap occurs, the fun really begins.  Vince Vaughn’s take on Millie is hilarious. We’re used to seeing the body-swap films where it’s a young person in an older body and vice versa, but the gender swapping and factoring in Vaughn’s body is of The Butcher and Millie has to struggle with all this … well, it’s certainly a refreshing take on the trope.  The same can be said with how Kathryn Newton handles her character transforming into The Butcher. Seeing her as a badass psychopath is pretty awesome. (She looks amazing in the red leather jacket, by the way).

There’s one thing I did notice about the film that I feel was a mistake in the long run. None of the victims are characters that the audience cared about.  I mean, sure, there is a sizeable body count, but when it comes to deaths that could have impacted our hero, it just falls short on delivering.  It’s almost as though the writers were aiming to punish all the bad people, but by doing this, to a degree The Butcher is more so an anti-hero.  I feel this was intentional, and while it’s fun to cheer on the slaughter of a potential rapist, we never get to see the true dark nature of the killer like we do in various other slasher films.  To a degree, yes, slashers are a bit notorious for being cautionary tales showing how those drinking, doing drugs, or having premarital sex will find a gruesome end at the hand of a serial killer.  Freaky, on the other hand, plays by a new set of rules, and as a result it does neuter the experience.

Freaky is presented in the aspect ratio 2.39:1.  The 1080p image is arrived at with an AVC MPEG-4 codec at an average of 30 mbps.  After hearing the commentary, they discuss how the look of the film was intended to look like the slasher films from the 90’s, so the result is a very polished look that mostly lacks atmosphere.  This is really my only issue with the film, because I’m not a fan of the polished look from that decade in horror.  From a technical standpoint, the image does look great.  The film has a slight sepia tone at times, so skin tones look slightly yellow at times, but it’s not too drastic.  The blood looks a little darker as well.  There is a nice sharpness in detail that comes through with many of the textures in the costumes and sets.  Things are a bit over-lit, but again, this is style choice. The black levels are nice; no sign of crushing or any other compression issues.

The DTS HD-Master Audio 5.1 track is what you would expect from a slasher comedy.  The dialog is clean and crisp, but when it gets to the gore impacts make the over-the-top kills all the more effective.  The score can be a bit overwhelming at times, but we’re not talking about it being distractive like a Christopher Nolan film. The sound design plays more for laughs than building suspense, but the 5.1 surround does at least raise some tension, most notably in the opening sequence.

Feature Commentary with Co-Writer and Director Christopher Landon: Landon definitely carries this commentary, throwing out plenty of factoids about the making of the film to keep viewers interested.  Despite being on his own, there are very few quiet points, and he keeps it focused on the production.

Deleted Scenes: (5:27) There are three scenes offered here. The first two are more filler, and you can see why they were cut.  The third scene mostly adds some humor to the third act but was obviously cut for pacing issues.

Split Personalities: Millie vs. The Butcher: (2:24) A little insight to how the actors worked together to flesh out their characters on a physical level.

Crafting the Kills: (3:35) A look into how they achieved some of the unique kills in the film.

Christopher Landon’s Brand of Horror: (2:35) He discusses how he enjoys blending comedy with horror.

Final Girl Reframed: (2:48) Here they discuss the final-girl trope and how they go their own route with it.

Freaky is a good time. It does have its flaws, but most of those can be ignored simply because Vince Vaughn is so much fun to watch here.  While I don’t feel this will make as big of an impact as Scream did to the horror genre, Freaky is definitely a welcomed and refreshing take on the slasher genre.

Brent Lorentson is a horror writer and film critic based out of Tampa, Florida. With a BA in Digital Film, he co-wrote and co-directed Scavenger Hunt. His short stories have appeared in various horror anthologies. In 2019 his short script Fertile Blood will be a part of the anthology horror film Slumber Party. He is currently working on his first novel A Dark and Secret Place set to be released in late 2019. Favorite Films: Taxi Driver, Fight Club, I Saw the Devil, The Wild Bunch, Dawn of the Dead, A Clockwork Orange, Pulp Fiction, Heathers, The Monster Squad, and High Fidelity.
Come Play (Blu-ray) Paramount Presents: Elizabethtown (Blu-ray)