Posted in: No Huddle by Jeremy Butler on February 19th, 2021 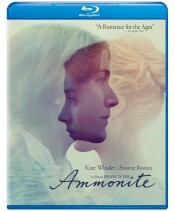 Ammonite was a very hard movie to stay interested in. In its defense, I don’t believe that I was the target audience for the film; I’m not really interested in period dramas, and the only things I know about paleontology I learned from Ross on Friends. There is also the fact that as a film it is very slow and dry, and the most interesting angle was the relationship that developed between characters Mary Anning and Charlotte Murchison. Granted this was an intriguing development, but before we are treated to this, we have to survive an hour of poignant silences broken up with very little dialog. There is also the fact that my research has shown that their historical accuracy of the characters’ relationship in the film has been called into question. So now as a audience member I am forced to question the only truly interesting thing about the film. Kate Winslet and Saiorse Ronan are top-level talents, but I fear that even they weren’t enough to make the film worthwhile for me. Essentially, Ammonite is only for those who enjoy slow-building period dramas.

If there is one thing this movie taught me, it’s patience. Watching the film, I really struggle with my commitment to finish the film. It was just difficult to find anything to enjoy about it, because as I mentioned earlier, there wasn’t a lot of dialog, and for the first part of the film, there wasn’t really much going on. I will say that the one line I did enjoy was when Winslet’s Anning, whose demeanor shows that she only barely tolerates other people, gets a sort of revenge on an obnoxious character by telling him that a prized specimen he collected was nothing more than fossilized feces. I will confess that made me chuckle, but that one instance aside, this was a really boring film for me. I initially hoped to share the film with my wife, but circumstances didn’t allow that opportunity. Even so, I have my doubts that she would have been interested either; perhaps by the later relationship, but she would have likely stopped watching long before we got to that.

Speaking of the relationship, it is my understanding that was the film’s biggest draw, and once again I reiterate that its addition does not come until well into the film, and it is a task to make it to that point. Up until this point, it was essentially Winslet’s character being unlikable and Ronan’s character falling into a deep depression. I understand that these attributes were built up in order to show the significant impact the pair’s friendship had on their lives. Even so, I think that a good chunk of the angst needed to be removed for the sake of keeping the story from becoming tedious.

When we finally get to the heart of the film, they pull no punches, and I was caught off guard, having known nothing about this prior to watching this film. As I said earlier, I did not know anything about these historical figures or their relationship, but in preparation to watching the film I did some cursory research, which is how I learned that there was some debate regarding the nature of their relationship. While it has long been established practice in Hollywood to sensationalize things, I’m left to wonder if that was the case for this film. I’m loathe to say that without this addition, there isn’t much to make the film watchable. Without the pairing, it’s just a film about a clearly unhappy workaholic and a grieving mother. Needless to say, that doesn’t exactly spell entertainment.

Ammonite is very clearly a niche market movie. It has a specific target audience and anyone outside of that target will probably not identify with the film. I am of course only speaking for myself, but as such I will advise that if you don’t enjoy slow-building movies or period dramas, you may want to let this film pass you by. Again I won’t say the film was a waste of time, but for me, it was not worth watching.

Jeremy Butler is a film school graduate of the International Academy of Design and Technology. He is been writing for Upcomingdiscs since 2012; however, movies have played a big part of his life for much longer. Favorite genres include horror, science fiction/fantasy, and comedy. Favorite movies are V for Vendetta, Boondocks Saints, Kiss Kiss Bang Bang, and The Godfather.
Greenland (Blu-ray) Random Acts of Violence