Posted in: Disc Reviews by Jeremy Butler on February 19th, 2021 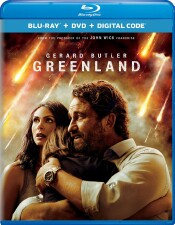 Gerard Butler vs. Comets. Well, I suppose Butler has been making a habit of overcoming insurmountable odds in recent years. I mean, he has managed to save two different presidents in three movies, and it’s not like this is his first time facing down a natural disaster (remember Geostorm), but even with that said, this is quite the thing to have to overcome. Greenland tells the story of the Garrity family as they try to make it to an underground bunker in Greenland before an extinction-level event. While this premise does have some intrigue, I’m pretty sure that most of us would have been trying to find a place to survive a little closer to home. Needless to say, that wouldn’t make for a very good movie, so here we are. Normally we watch Butler face adversity alone, but this time he has help in the form of Deadpool’s Morena Baccarin, as they both have odds to face separately as well as together. While I did struggle with the overall concept of the movie quite a bit as well it mainly just feeling like a rehash of former disaster movies, I was never bored, as the special effects go a long way to creating a realistic and intense experience.

Yes, the film is very reminiscent of another disaster film (2012), right down to the family estrangement and the attempts to get to safety on in transports deemed for the special people. Granted, the Garrity family was one of those deemed special people until they weren’t because of their son’s condition. That right there was a clever device to further the plot as well as send the characters on their individual journeys. While I did find it cruel, I also found it logical that something like that could occur in a situation like this. In the event of an extinction-level event, human courtesy gives way to cruelty. I can completely believe that.

Their individual journeys were the most entertaining portion for me because they gave the most realistic representation of what would occur during this type of event, as they both face challenges such as kidnapping and theft and are forced to do things that they wouldn’t normally do in a civilized society, most notably when Gerard found himself in a fight for his life over his wristband identifying him as one of the special people. This was an intense sequence as Butler was forced to defend himself against another individual desperately trying to make it to safety, even if it means at someone else’s expense. For me, that really grounded the story in reality. We all know that as human beings we are capable of extreme things in order to survive. This same circumstance is mirrored with Baccarin’s situation as her would-be good Samaritans turn on her and abduct her son to use him to ensure their own survival. In my opinion, these subplots are what keep the story from becoming a carbon copy of 2012.

The overall plot of the film just kind of felt unrealistic to me. Once the Garrity family lost their golden ticket, I expected things to switch to locating a closer to home means of protection, like a family bunker or something like that, but instead the primary focus is finding a way to reach Greenland. The plausibility of this goal just felt wrong. I mean, you were already denied access on the transport once the son’s condition was discovered. What’s to say that same situation would not occur again? I mean, sure, you can lie and keep it to yourself, but that’s a hard pill to swallow. Also, with their goal to guarantee their own survival, they sacrifice quite a few people along the way, including a neighbor kid as well as their son’s grandfather. This doesn’t exactly make them likable characters. True, I understand that in the face of extinction hard choices sometimes have to be made for the greater good, but in this case it makes it very hard to root for them when they are very clearly only out for themselves. Not a criticism, just an observation.

In conclusion, while Greenland doesn’t completely break new ground, it is not a boring experience. And while it is hard to root for the Garrity family at times, it is understandable that they are forced to make some of the choices that they make. I would have at the least tried to save a couple of people, but then again, who knows how I would react if faced with the same situation. All in all, Greenland gives you an intense ride and a distraction that is very much needed in this pandemic existence that we all are currently living through.

Jeremy Butler is a film school graduate of the International Academy of Design and Technology. He is been writing for Upcomingdiscs since 2012; however, movies have played a big part of his life for much longer. Favorite genres include horror, science fiction/fantasy, and comedy. Favorite movies are V for Vendetta, Boondocks Saints, Kiss Kiss Bang Bang, and The Godfather.
Paramount Presents: Elizabethtown (Blu-ray) Ammonite (Blu-ray)