Posted in: No Huddle by Brent Lorentson on February 19th, 2021 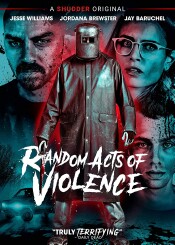 The argument about violence in entertainment has been going on for decades.  Groups have always wanted to point the finger at music, television, books, and movies for being the cause of violence or inciting crime, and typically the creators of this art are the ones being blamed.  In the 90’s I remember the uproar about how Natural Born Killers  was going to create a generation of serial killers but had people been paying attention to the film and how the violence of real life was being exploited, but by the media.  Then even Metallica and Marilyn Manson were thrown under the bus for “creating” murderers in regards to the infamous West Memphis 3, who were accused of murder simply because of the music they listened to. Then there were the Columbine shooters, who were guilty because of the music they listened to and the movies they watched.  Only recently does it seem that the finger-pointing has gone the direction where it’s deserved — towards mental illness.  That’s not to say that life doesn’t ever imitate art.  There is definitely some responsibility an artist has, and when they get into some more extreme topics, there is a fine line you have to walk.  Random Acts of Violence shows what can happen when the subject matter is put in the wrong hands, especially when art is exploiting real life and in turn is exploited again to create heinous acts of violence.  At first glance this may appear to be a simple slasher film, but there is certainly more to unpack as you look more closely at what is happening.

Though we may be used to seeing Jay Baruchel in comedy roles, he’s been establishing himself as a writer, director, and producer for some years now.  With Random Acts of Violence we get to see him not just act, but co-write, direct, and produce his first horror film, and it’s a doozy.  At first glance it seems over-stylized and filled with over-the-top violence and gore, but it’s something that is very necessary to achieve what he was going for with this film.  “Slasherman” is a very successful comic in this world, and the comic’s creator, Todd (Jesse Williams) is ready to put the character to rest, only he’s struggling to give the character the proper sendoff.  To get those creative juices flowing, Todd’s partner, Ezra (Baruchel) has arranged for a road trip/ publicity tour that happens to run through the real-life locations where the murders that inspired “Slasherman” occurred.  Along for the ride is Todd’s girlfriend, Kathy (Jordana Brewster), who is writing a book of her own that will focus on the victims of the real life I-90 killer, aka “Slasherman”; and then there is the assistant, Aurora (Niamh Wilson).  To a degree the setup sort of gave me vibes of the road-trip-serial-killer film Kalifornia (if you haven’t seen that film it’s one definitely worth hunting down), but the film definitely is going a different direction.

Despite that the I-90 killer has been in retirement for some time, when he discovers that Todd will be in his killing fields and is retiring the character, well, this is enough to motivate the killer to come out of retirement in a big, gory way.  Many of the scenes may look over-stylized with a heavy use of green and red lighting, but there is definitely a purpose behind this, and I liked how it worked out.  The kills, I have to admit, are vicious, and despite being over-the-top, this doesn’t at all feel like you’re watching Scream or Friday the 13th. These kills leave an impact, and you genuinely feel the horror of the situation.  This is something I applaud Baruchel for pulling off.  So many slasher films treat the victims as nothing more than another notch for the killing board, but Baruchel does a fantastic job of humanizing the characters, and their demise definitely makes an impact.  The key emotional struggle Todd seems to have is about connecting to the victims that he’s exploited for the comics.  Now that he has to see the family and friends that were connected to the killings, and seeing people killed in ways emulated in his comic is what also works well here.

What is a little frustrating is how the third act brings everything together.  While I appreciated what they are doing with Todd and the I-90 killer, I feel it’s almost another movie or at least plenty of material that is sadly boiled down to a mere 15 minutes that leaves you with way too many unanswered questions, and the film is open for too much interpretation.  But my biggest gripe is with the performance Jesse Williams delivers.  It’s very hit-or-miss here, and despite being given plenty of scenes where it should be showcasing a range of emotion, well, we don’t get much of that here.

This is another solid release for Shudder. While I’m not in love with the film, there is plenty here that I like, and I’ll definitely be checking it out again.  This film does have a lot to say, and it certainly exposes the dangers of writing about serial killers, horror, and the fandom that comes with it.  The biggest takeaway, though, is how much Jay Baruchel is growing as a filmmaker, showing that Goon wasn’t just a fluke, that the man has the chops to keep growing as a director.  If you’re a fan of horror and especially road trips gone awry, this is definitely worth checking out.

Brent Lorentson is a horror writer and film critic based out of Tampa, Florida. With a BA in Digital Film, he co-wrote and co-directed Scavenger Hunt. His short stories have appeared in various horror anthologies. In 2019 his short script Fertile Blood will be a part of the anthology horror film Slumber Party. He is currently working on his first novel A Dark and Secret Place set to be released in late 2019. Favorite Films: Taxi Driver, Fight Club, I Saw the Devil, The Wild Bunch, Dawn of the Dead, A Clockwork Orange, Pulp Fiction, Heathers, The Monster Squad, and High Fidelity.
Ammonite (Blu-ray) Rick and Morty: Seasons 1-4 (Blu-ray)