Posted in: No Huddle by Brent Lorentson on March 4th, 2021 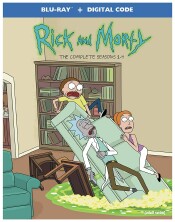 For a while now it has been accepted that cartoons are no longer for kids, and it can be argued that most of the popular animated shows now are more geared towards adults rather than kids these days.  I’ve grown up with The Simpsons, and I’ve enjoyed the run that Family Guy has had, but really these have been the only animated shows I’d consider myself loyal to.  Upon seeing some ads promoting Rick and Morty as well as hearing my friends talk about the show, I couldn’t help but think perhaps this could possibly be a new animated series I could get excited about. At first glance Rick and Morty seems like the perfected animated blend of Family Guy and The Simpsons, and for the other-worldly locations even Futurama.  The comparisons are hard to look past; after all, the family dynamic is just about the same, and the shows both are filled with their pop-culture references throughout, so what is that makes Rick and Morty stand out from the other shows?

The title characters, both voiced by their creator Justin Roiland, Rick (an elderly, alcoholic inventor) and Morty (well, let’s just say he’s slow-witted), are an unlikely duo who find themselves getting into trouble and adventures together, usually at the fault of an experiment gone wrong.  These adventures take them into multiple realities as well as distant planets (or not planets, in the argument of them travelling to Pluto).  The dynamic between the grandson and grandfather is one that is intentionally odd and uncomfortable at times but does allow for plenty of humor to arise.  For instance when Rick believes he and Morty are trapped in a simulator and the only way they can talk is if they strip down and take a shower together, it’s so wrong, but you can’t help but laugh.

One of my favorite episodes involves Rick using a device that allows Morty and himself to immerse them in a teacher’s dream so they can convince the teacher to give Morty a better grade in class.  The episode is not only a humorous take on Inception, but we also get to see the dream master himself, Freddy (though they call him Scary Terry here).  If that wasn’t enough, Rick also gives the family dog a device that allows it to be smarter, and as his intelligence grows, he helps all the other dogs he can and eventually creates an army of super-dogs that want to conquer the human race.  There was simply so much to laugh at and enjoy here, I almost felt it was too much of a good thing.

In the version I’ve seen, the episodes have been all uncensored and not television-friendly, so if you have some little ones running around, this may be a show with a vulgar tongue they may not be old enough for yet.  Just like Family Guy and The Simpsons, the show covers themes that are relevant to issues families are experiencing in their everyday lives.  Though there is one that may be a bit much for some viewers when it is divulged that Summer was supposed to be aborted, rather than be the first born.  Surprisingly, this isn’t going for shock value but actually handles the topic in a reasonably respectable way.

At the end of the day, I like the show and I’m looking forward to seeing where the writers take the series.  There is a lot of potential in the show, so long as it continues to separate itself from the rest of the animated shows that are out there.

What makes the show more than a simple juvenile comedy is that each of the characters find themselves engaged into some heavily questionable moral situations.  In one episode Summer and Rick find themselves on a planet with Rick; on the planet all the inhabitants are mentally enslaved by Rick’s ex-girlfriend.  The notion of being mentally enslaved may seem bad, but instead she seems to have improved upon the lives of everyone on the planet, so the question is posed, is it OK to enslave these people even if it keeps them from harming themselves?  We get to see what happens when the inhabitants of the planet no longer are under control, and we get a surprising reaction to this.

The first couple seasons were more dialog-heavy, and we actually got some decent character development along with some unique stories. Now the show seems to have amped up on their animation and taken a step back from what made the show so engaging from the start.  The visuals are pretty incredible, though; the detail on the various planets and reality has stepped up as well as the amount of aliens and action going on in a screen. Also the action and gore have stepped up significantly.

Personally my favorite episode is Rattlestar Ricklactica, which has Rick and Morty discovering there is a planet ruled by snakes and has Morty feeling guilt over killing one of the “space snakes” that will eventually lead to the planet’s extinction according to Rick. It’s Morty’s guilt that has him buying a snake and sending it to the snake planet that causes everything to spiral out of control.  With its parallel history to Earth and then it riffing on The Terminator franchise, this episode is bonkers and fun.

Another aspect to how the show has gotten bigger is the number of guest voices that are coming in for the episodes. Sam Neill, Kathleen Turner, Taika Waititi, Jeffrey Wright, Elon Musk, Matthew Broderick, and several others.  As the show gets bigger, I’m expecting even more actors to flock to the show to lend their voices as we’ve seen in the past with hit animated shows like The Simpsons, Family Guy, and South Park.

As I mentioned before, the animation this season is pretty great, but when it came to episodes I can feel lived up to the previous seasons, well, there weren’t many.  Now that the show has been renewed for several more seasons (most likely with a quicker turnaround expected), I’m worried this may have an impact on the quality of the show.

Sure, this may not have the amount of laughs from the previous seasons, but it still continued to be a fun ride, and, well, that’s all we can ask for.  I’m still curious to see where the show will go from here, and I have hope that there is still some magic in this creative bottle.

Brent Lorentson is a horror writer and film critic based out of Tampa, Florida. With a BA in Digital Film, he co-wrote and co-directed Scavenger Hunt. His short stories have appeared in various horror anthologies. In 2019 his short script Fertile Blood will be a part of the anthology horror film Slumber Party. He is currently working on his first novel A Dark and Secret Place set to be released in late 2019. Favorite Films: Taxi Driver, Fight Club, I Saw the Devil, The Wild Bunch, Dawn of the Dead, A Clockwork Orange, Pulp Fiction, Heathers, The Monster Squad, and High Fidelity.
Random Acts of Violence Do the Right Thing (UHD Blu-ray) (4K)