Posted in: Disc Reviews by Jeremy Butler on March 4th, 2021 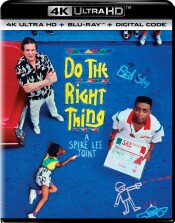 This quote is one of two featured at the end of the film, the other coming from another prominent civil rights leader, Malcolm X. In his quote speaks about how though there are good people in the world, there are also a good many bad, and those bad people tend to be in positions of power that grant them protections from their misdeeds. In this current political climate, there is a lot of truth in both views. Do The Right Thing, arguably Spike Lee’s greatest and most cultural relevant film, does a good job of displaying both views. However, what I am most impressed by is how a movie made over thirty years ago can still have relevance in today’s society. The issues portrayed in the film are things that we as a nation still struggle with to this day, and though I like to believe that things are improving, it would be naïve of me to suggest that the themes of this film no longer apply. In addition to its cultural relevance, this film served as the film debut for Rosie Perez and Martin Lawrence. A testament to Lee’s eye for talent, the film has received several accolades over the years, including a Academy Award nominations for Best Supporting Actor for Danny Aiello and Best Original Screenplay. I do not believe that I can upsell this movie enough, so if you haven’t seen it, let this be your figurative kick in the butt to do so.

The film covers many perspectives, the most prominent one being the character of Mookie (played by Spike Lee himself). Mookie is your everyman character, just trying to get by and get paid as he likes to put it. Mookie works for Sal, an Italian-American who runs the local pizzeria along side his two sons Pino and Vito. Pino is an overt racist who does little to hide his disdain for the black community, Mookie especially, while Vito is on more friendly terms with Mookie. As the story goes, Sal, despite efforts to be fair and decent, comes into conflict with customer and friend of Mookie’s Buggin Out (Giancarlo Esposito), who criticizes the lack of black representation on the Wall of Fame displayed at the pizzeria.

Meanwhile, we are introduced to a host of neighborhood characters, including Da Mayor (Ossie Davis), a friendly drunk who goes around dispensing wisdom in between drinks; Radio Raheem (Bill Nun), who basically walks the neighborhood all day, blaring Public Enemy from his boombox; and many other characters. This litany of characters gives the perspective of a typical day in the life in a low-income neighborhood, most significantly the animosity between neighbors and police.

A majority of the film is lighthearted and entertaining, featuring the comic talents of Robin Harris as well as Samuel L. Jackson as a unofficial narrator, but the film also doesn’t shy away from showing how quickly a disagreement can devolve into chaos that ends in death and destruction. The ability to balance these themes are what make the film Lee’s best work in my opinion. However, it is the realism depicted during the confrontation with police that resonates the most with today’s society. We’ve all witnessed it; the fact that Spike Lee created a film about it over thirty years ago and we are still seeing this level of injustice to this day is upsetting and lets us know how far we still have to go as a society. However, I remain hopeful that we can get there. I believe that Spike Lee has that same hope, because you need only look at the film’s conclusion, when despite being on opposite sides, the two prominent characters still show a level of respect for one another; that is much needed catharsis. It tells me that despite our differences, there can still be mutual respect.

Do The Right Thing is presented in its original aspect ratio of 1.85:1. The ultr- high-definition 2160p  image is arrived at by an HEVC codec with an impressive average bitrate of 85-90 mbps. The ultra- high-definition image presentation does a good job of capturing the best of the original film. It’s fortunate that grain wasn’t completely obliterated, as that is the temptation of these older remasters on 4K and even HD. There’s enough of it remaining to maintain the organic feel of the movie, and that is so important to this transfer. Spike Lee went to a lot of trouble to film on this authentic street. The atmosphere is an integral part of the image. The HDR does a fine job of boosting these warm colors that assist in getting across that this all happens on the hottest day of the year. That means a lot of nice reds and oranges. The brick wall behind the corner boys was intentionally painted fire-engine red, and for the first time since its theatrical presentation you get the full impact of that choice. That’s the kind of thing HDR was created to display. Black levels are fair, but not as important here, as it’s a very bright palette that is being presented here. The transfer is spotless with almost zero signs of age evident here.

The DTS-X track defaults to a pretty solid 7.1 mix. From the very onset of the film the subs dominate the soundscape. The urban music comes through with powerful bass, and it doesn’t matter if we’re talking the film’s soundtrack or the music coming from Radio Rahim’s boombox. It’s no wonder that sucker needs 20 D-cells to power it. There’s a rather nice use of surrounds throughout the film to deliver the “ordinary” sounds of the neighborhood. They create a sweet immersive quality that puts you right there on the street with these characters. Dialog always cuts through and is perfectly placed. Music is as crucial to the film as the dialog is, and this audio presentation will not disappoint. This is why you have at least one powered sub in your system.

The extras can be found on both discs with the UHD disc containing the same HD presentations as the Blu-ray.

My Scenes: This was an interesting feature. Essentially this feature allows you to bookmark your favorite scenes from the movie to revisit at your leisure. This is a feature that someone like me who watches a lot of films, some several times, could make a great deal of use of, especially those that tend to return to beloved movies several times so that they can relive your favorite scenes. However, if you are a one-and-done kind of person when it comes to movies, this feature probably isn’t for you.

Do The Right Thing: 20 Years Later (35:47): A look back featurette that examines the film back at the twentieth anniversary, including interviews with cast members and the production crew as they discuss the themes and impact of the film. The great thing about this featurette is the one-on-one interview approach that was taken, just Spike Lee reminiscing with past coworkers, gives it the vibe of old friends catching up.

Deleted and Extended Scenes (14:14): A standard featurette that displays scenes that didn’t make the final cut or scenes that were cut down to reduce the film’s overall runtime. My personal favorite had to be Mookie Delivers Pizza; it was a scene that showed the importance of tipping.

Behind the Scenes (57:59): Six behind-the-scenes featurettes to include an intro from Spike Lee himself, a read-through with the cast and crew, character development, rehearsals, improvisations, and a block party. Archival footage recorded back during the production of the film. My personal favorite was the read-through. I’ve always been a sucker for that kind of behind-the-scenes featurette, but this one was intriguing because they do a round –the-table (though there isn’t even a table in the room) introduction with the cast to include their previous work. The exchange in the room just gave a great look at how the film came together and how the cast made their characters their own.

Making of Do The Right Thing (01:01:01): A hour-long featurette broken down into 10 smaller sections for easy digestion. In my personal opinion, if you watch the behind-the-scenes featurette, you can probably skip this featurette.

The Riot Sequence: Curious about how they choregraphed the riot sequence? A look at the storyboard gallery should answer all your questions.

Cannes, 1987 (42:22): Broken into twelve sections, this Q&A panel featurette tells the story of the year the film came to the Cannes Film Festival.  At this point, I was starting to experience a bit of a overload from all the featurettes that I’d already seen, but there were a couple of gems that answer some essential questions regarding the film, like the featurette about Mookie, which explains the reason that the character committed a pivotal act in the film.

There’s a reason that this film was selected for preservation by the National Film Registry in its first year of eligibility and has been called “culturally, historically, and aesthetically significant” by the Library of Congress. Do The Right Thing is more than just a film; it is a documentary of issues that still have significance, and it does it in a manner that is relatable and digestible. Lee could have just done a high-tempo in-your-face here-is-the-problem-with-society movie (because he’s done that), but here he takes a more subtle approach and tells the tale of an entire neighborhood, showing how tragedy affects a group, not just a individual. Do The Right Thing is a epic and a must-see for everyone. I know that Spike Lee is not everyone’s cup of tea, and he and this film have had their share of controversies over the years, but I can think of no film with a more powerful message than this film.

Jeremy Butler is a film school graduate of the International Academy of Design and Technology. He is been writing for Upcomingdiscs since 2012; however, movies have played a big part of his life for much longer. Favorite genres include horror, science fiction/fantasy, and comedy. Favorite movies are V for Vendetta, Boondocks Saints, Kiss Kiss Bang Bang, and The Godfather.
Rick and Morty: Seasons 1-4 (Blu-ray) The Croods: A New Age ( UHD Blu-ray) (4K)