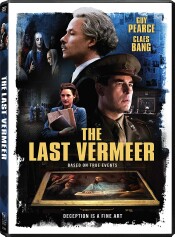 “I believe that every fascist should be swindled.”

The Last Vermeer truly was a worthwhile film experience for me, worthy of the silver screen. Granted, I doubt it would have been big at the box office domestically, but I don’t question that critics would have enjoyed just as I did. The film is based on the 2008 book The Man Who Made Vermeers by Jonathan Lopez, and tells the story of Dutch folk hero Han van Meegeren (played by Guy Pearce), an art forger who swindles millions of dollars from the Nazis. Following World War II, van Meegeren become widely known as one of the most ingenious art forgers of the 20th century, when it was revealed that he had sold a forged painting to Reichsmarschall Hermann Göring during the Nazi occupation of the Netherlands. These events were revealed after a sensational trial in which he was being charged as officials believed that he had sold Dutch cultural property to the Nazis, a capital offense. Facing potential death by firing squad, Van Meegeren confessed to the less serious charge of forgery. It is estimated that Van Meegeren swindled buyers out of the equivalent of more than US $30 million, including the government of the Netherlands. But that is enough with the history lesson; let’s talk about the film.

The purpose of the history lesson was to bring you all up to speed for the film, as before viewing it, I knew nothing about Han van Meegeren. Also, the film pretty much drops you into the thick of things; it doesn’t waste a lot of time rehashing the events of World War II. Despite this hit-the-ground-running approach in the beginning, the film is very easy to follow and enjoy. The majority of it is told through the perspective of Captain Joseph Pillar (Claes Bang, Netflix’s Dracula), an officer with Allied Command with the responsibilities of finding lost cultural masterpieces, as well as capturing those who profited from collaboration with the Nazis. Before you try to look him up, let me save you the trouble; he is a fictional character. Captain Pillar is a motivated individual, hell-bent on capturing every collaborator he can. His dedication is so strong that even his commanding officer warns him to not burn himself out, essentially telling him, “You’re not going to get every single one of them.” Over time, the motivation for this dogged pursuit is revealed to stem from a very personal place. This addition humanizes the character in my opinion; the internal conflict that he battles gives the character much-needed depth.

Through his work he discovered a lost masterpiece (Christ and the Adulteress) by Johannes Vermeer. While tracing it back through the buyers and sellers, Pillar connects it to van Meegeren, a wealthy Dutch citizen (Pearce). Van Meegeren opening admits to selling the painting. That should be the end of it, but Pillar can tell van Meegeren knows more than he is saying. Throughout it all, van Meegeren is glib and only speaks of his passion for art. Essentially, his mannerism should make you despise the character, but this is the true talent of Pearce, as he finds that fine line between obnoxious and amusing. This is seen most prominently during the trial when he is cross-examined by the prosecutor. In addition, Pearce brings a certain charm to the character. Under the circumstances, van Meegeren is not a likeable person. During the occupation, he thrived selling art to the Nazis, but even so he is, or should I say Pearce is, so charismatic that I found it utterly impossible to hate him.

The key element to the film is the manner in which the story unfolds. As I said, Pearce throughout being accused of being a collaborator is smug and does very little to defend his actions, and then the ultimately truth is revealed, and we gain understanding as to why he was not worried about the prospect of impending death. At first I found myself wondering, why didn’t he just come out with the truth? Why the game of cat-and-mouse with Captain Pillar? A fact that the captain himself raised.  Pearce gives the perfect explanation, “The experts would have told you that it’s impossible to fake the immortal Vermeer, and I needed you to discover the truth for yourself. Always best, don’t you think?” Smug and completely correct. We can’t just be led to the truth; sometimes we have to discover it for ourselves. To be willing to take this level of risk imbues the character with genius and boldness. This is what made the story worth telling.

The Last Vermeer is an elegant and quick-witted telling of a time in history that is widely covered, but from a different angle that provides the satisfaction of seeing Nazis look the fools. It’s no wonder that van Meegeren became a folk hero during his time. All I did was watch a movie, and I found myself admiring what he accomplished. I’m not sure how much of the movie is based in fact, but if even half of it is true, van Meegeren was more than genius; he was a true artist. Granted, the film does somewhat call into the question his character in the end, but it isn’t enough to overshadow what he accomplished. I normally don’t go in for this type of movie, but as I said, the manner in which it was told makes it a truly worthwhile experience.

Jeremy Butler is a film school graduate of the International Academy of Design and Technology. He is been writing for Upcomingdiscs since 2012; however, movies have played a big part of his life for much longer. Favorite genres include horror, science fiction/fantasy, and comedy. Favorite movies are V for Vendetta, Boondocks Saints, Kiss Kiss Bang Bang, and The Godfather.
Vanguard (Blu-ray) Promising Young Woman (Blu-ray)