Posted in: Disc Reviews by Brent Lorentson on March 19th, 2021 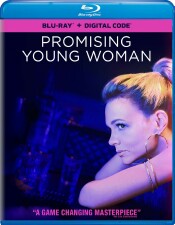 Promising Young Woman is a revenge film that takes what we’ve grown accustomed to seeing in the sub-genre and manages to give the audience something that is unique and fresh.  It’s a film with a moral compass that is aiming to reflect an attitude towards “rape culture” where males have gotten away with inappropriate and vile behavior under the guise of being drunk and taking advantage of women who are in various stages of intoxication.  It’s something that should disgust people because it continues to happen to this day, where privileged males seem to get a pass because they are young and come from prestigious schools.  Despite the subject matter, the film doesn’t come off as a cautionary tale or a PSA; instead, it’s definitely an entertaining film that manages to prompt a discussion among its viewers.  Now the film has several Oscar nominations; are they deserved?

When we meet Cassie (Carey Mulligan), she appears to be heavily intoxicated at a bar, and she’s gotten the attention of a few guys, one of whom decides to come to her aid in an attempt to be a “good guy”.  He ends up taking her to his place where he attempts to get her more drunk before taking advantage of her, but to his surprise he discovers she’s not as drunk as she appears.  This is where we discover that Cassie has made it a hobby of hers to go out to bars and lure men to take advantage of her, but she instead turns the tables on the guys. The film doesn’t go into detail of what exactly Cassie says or does to the men; it seems she just gives them an intense scare, but the possibility of violence is definitely implied.  It’s this kind of ambiguity that I found a bit frustrating as the film goes on.

It’s when Cassie meets Ryan (Bo Burnham), a guy she used to go to school with, that she begins to actually attempt to have a relationship, and possibly every guy in the world isn’t a sex crazed fiend.  The relationship with Ryan is really one of the film’s strengths. Their performances really are what got me pulled into this film and had me rooting for this couple to work out.  Seeing Cassie come out of her shell with Ryan is one of my favorite things I’ve seen this past year with a character, and it just reflects how great a performance Mulligan delivers.  What Mulligan does with this character ranges from sweet and beautiful to terrifying.  She’s a bad bitch (and I mean that as a compliment). The way she is so clever and puts herself in these vulnerable situations but manages to be the predator throughout is incredible.  Then there are moments where she’s on a date and she’s emotionally vulnerable and opening herself up to happiness. I absolutely love this character and how richly layered she is.

First time writer and director Emerald Fennell has definitely crafted a great script filled with characters that are distinctly unique, likeable, and flawed.  I can understand why her story wasn’t focused on violence but instead focuses on the lasting effects of sexual trauma and how it is viewed and affects those around the victim.  Cassie isn’t the actual victim of the assault, but it’s actually her childhood best friend.  We don’t need to see the incident to understand how this made an impact, and we can all appreciate Cassie’s rage and need for justice.  It’s when Cassie decides to focus her vengeance on the ones responsible for hurting her friend that the film shifts gears and gets a little darker, but we’re still in Cassie’s corner.  It’s the film’s third act that I’m trying to wrap my head around still, mostly because it takes an unconventional turn that while I don’t agree with it, I can appreciate that Fennell took a big risk.

As for the visual style of the film, Fennell definitely gives a unique look to the genre.  I love the wide shots; the shot composition a majority of the time is giving us a wide view of the scene where we get to be observers in some uncomfortable scenes, but because of this perspective we get to see it play out as objectively as possible.  When the film goes handheld, the story tends to get more personal, like on the dates between Cassie and Ryan, and as viewers we can definitely feel the intimacy developing between them.  Side note: one of the best visual jokes in the film is in the opening sequence where we see middle class guys in khakis dancing in slow-mo in sexually suggestive shots, I get what Fennell was going for, and I appreciate the film’s sense of humor.

I really enjoyed this film. While it took some story directions I didn’t necessarily agree with, I still enjoyed the ride.  This is a film that will make some feel uncomfortable and will hopefully shine a light on the behavior of certain guys while they go out for a night of drinking. Part of me roots for the idea of women like Cassie out there dispensing justice to the bad guys stalking the clubs under the guise of being “good guys”.  But what made Cassie admirable in her actions is that she always gave the guys the opportunity to apologize and make amends, which in some cases was better than they deserved.

Promising Young Woman is presented in the aspect ratio 2.39:1.  The 1080p image is arrived at with an AVC MPEG-4 codec at an average of 32 mbps.  This is a beautifully shot film that doesn’t imply elaborate camera tricks but instead focuses on nice shot composition.  From the set dressing to the colorful costumes (the nurse costume and wig), even the simple apartment locations or the coffee shop every location is distinct and well captured.  The texture at times like in the bachelor party, the pores of the skin, to the chest hair and even her blue bubble gum just looks great.  Even in the low-lit images there is some great black and shadow definition.  This easily is one of the best looking revenge films I’ve ever seen, without any compression issues.

The DTS HD-Master Audio 7.1 track isn’t flashy, but it’s well balanced between the score and other music injected through the film with the dialog that is clean and clear throughout.  The club scenes in particular work best as an example where the music is there, but it doesn’t over power the dialog.  Sure, anyone who has been in any club knows this isn’t realistic, but at least we can hear what’s being said.  There are other moments where we get some nice sound design. The mix is done well enough in a scene that tells a story through a cell phone while not being overbearing like a narration. It feels like it’s from on the set but maintains clarity where people in the video can be heard distinctly.

Commentary With Writer/Director Emerald Fennell:  This is a track that does offer plenty of information on the film. There are certain aspects I wish she could have gotten into, like the ambiguity of Cassie’s notebook.  There are some lulls in the track, but there’s nothing that is distracting about it.  Now that the film has gotten several Oscar nods, I hope down the road we can get a track with Fennell and Mulligan discussing their experience after the film’s release.

A Promising Vision: (4:03) Gets into what motivated Emerald Fennell to write and direct the project and avoid the typical violent tropes of revenge films.

Two-Sided Transformation: (3:16) Discusses the complexity of the character of Cassie and why Mulligan was drawn to the role.

Balancing Act (3:50) Gets into how the film adjusts its tone over the course of the film from dark humor to romantic comedy to horror.

This is definitely a different take on the revenge tale, and I feel that a lot of women will embrace this film, as it should be.  While I’m not sure it’s the best picture of the year, of the films nominated, it’s easily the more popcorn-friendly film.  Carey Mulligan and Bo Burnham are fantastic in this film, and the film is filled with several great performances.  This is a fantastic debut film from Emerald Fennell, and I’m looking forward to seeing what she does next.

Brent Lorentson is a horror writer and film critic based out of Tampa, Florida. With a BA in Digital Film, he co-wrote and co-directed Scavenger Hunt. His short stories have appeared in various horror anthologies. In 2019 his short script Fertile Blood will be a part of the anthology horror film Slumber Party. He is currently working on his first novel A Dark and Secret Place set to be released in late 2019. Favorite Films: Taxi Driver, Fight Club, I Saw the Devil, The Wild Bunch, Dawn of the Dead, A Clockwork Orange, Pulp Fiction, Heathers, The Monster Squad, and High Fidelity.
The Last Vermeer Godzilla (2014) (UHD Blu-ray) (4K)