Posted in: Disc Reviews by Brent Lorentson on March 15th, 2021 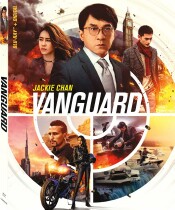 It’s been a while since Jackie Chan has put out a film I’ve gotten excited about.  Vanguard seemed like it could be the movie that would change that, since it had Chan reteaming with Stanley Tong (Rumble in the Bronx and First Strike among many others), but alas, this isn’t the case.  Despite his age I know the man still has some gas in the tank. He’s simply an amazing performer who needs the right script to come along with the right director behind the camera.  Vanguard is an action thriller that definitely feels like a throwback to the late 80’s and early 90’s action films, but unfortunately there is too much bad CGI that gets in the way of the fun along with political undertones that just seem forced.

Vanguard is basically a covert security company and is led by Tang (Jackie Chan).  When one of the company’s important clients is caught in an arms deal that goes sour, it’s up to Tang and his team to protect their client and his family.  Tang, of course, doesn’t agree with his client’s practices, but he feels responsible to protect the family, and this results in a mini-globetrotting adventure that spans from London to Africa and India and more locals that will be tacking some major miles to their frequent flier program.

Really the story is bland, and most fans of martial arts films are used to movies with sub-par plots that do nothing but get the audience from one action sequence to the other.  One of the more exciting sequences takes place on a river that inevitably leads to a waterfall.  This is a big over-the-top sequence, and it’s certainly fun, but some of the CGI that’s added to enhance the scene ends up hurting the sequence more than anything.  I understand certain aspect of the scene just can’t be safely performed without CGI, but there are still points early on like when they first get into the river that just seem as though practical FX would have been easier.

As I was saying about how this feels like an 80’s-90’s action film … The shootouts definitely have an old-school John Woo flare to them that just made me smile.  Then there are the moments that felt like I was watching The Rock; you know the San Francisco chase scene with Hummer versus Ferrari?  Well, we get something very similar to that in the film’s final action sequence, and I swear some of the music beats are right of the Jerry Bruckheimer catalog.

The script is filled with bad one-liners, but that can be forgiven. What is sort of missing is the charm that Chan tends to bring to his films.  He has some fun in bits of the film, but for the most part he’s in the role as the leader and plays the role more seriously than I would have hoped.  What really needed a massive rewrite are the villains. They just come off as sexist egomaniacs, no menace to these characters at all.  There’s never a moment where you feel the Vanguard team won’t prevail. You never really feel the odds are against them, so the stakes set up in the film just don’t even matter.

Vanguard is presented in the aspect ratio 2.39:1.  The 1080p image is arrived at with an AVC MPEG-4 codec at a range between 16-35 mbps.  The look is a bit of a mixed bag, and I believe that because this was intended for 3D upon first release and this is just basic format, the CGI looks worse.  There are times when the film looks warm and vibrant, like in the jungle settings and certain parts of Dubai, but then in other instances the image just feels cold and flat.  There is so much CGI that at times this feels like a video game, and not in a good way. Some of the CGI action sequences have a bit of a motion blur, and it’s a bit distracting, but in the rare spots without CGI, the film does look great.

The DTS HD-Master Audio 5.1 track is a mix of Mandarin and English, so there are subtitles, or you can go with the option of having the film dubbed.  This is a loud movie, with big action sequences that are filled with gunfights, car chases, and hand-to-hand combat, and the subwoofer gets a workout here.  The audio is the best part of the film. Even the score is big; that clearly was inspired by the Don Simpson/Jerry Bruckheimer films of the 90’s.

The Making of Vanguard: (7:51) A lot of this is with director Stanley Tong discussing all the stunts and working with Jackie Chan.

The film does have its entertaining parts, but this definitely doesn’t live up to any of the great Jackie Chan films in his vast catalog.  The blooper reel tends to come along with every Chan film; this time around even that is a bit lackluster.  I know he’s getting older, and I don’t expect him to do all his stunts, but I’d imagine he’d be able to pick better projects than this.  It’s not terrible; it’s entertaining but forgettable.

Brent Lorentson is a horror writer and film critic based out of Tampa, Florida. With a BA in Digital Film, he co-wrote and co-directed Scavenger Hunt. His short stories have appeared in various horror anthologies. In 2019 his short script Fertile Blood will be a part of the anthology horror film Slumber Party. He is currently working on his first novel A Dark and Secret Place set to be released in late 2019. Favorite Films: Taxi Driver, Fight Club, I Saw the Devil, The Wild Bunch, Dawn of the Dead, A Clockwork Orange, Pulp Fiction, Heathers, The Monster Squad, and High Fidelity.
Breakdown (Blu-Ray) The Last Vermeer