Hercules And The Captive Women (Blu-ray) 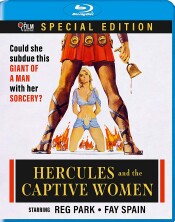 The Italian film industry has been setting trends since Edison first released his wonderful moving picture cameras. Names like Dario Argento, Lucio Fulci, and Lamberto Bava delivered what would be known as Spaghetti Nightmares. These are the films that gave birth to the American splatter craze that began in the 1970’s. Then there was Sergio Leone and his Spaghetti Westerns that propelled Clint Eastwood to instant stardom with his Man With No Name films. Most film fans know these filmmakers and the history that spawned. What is less known is that decades before these trends Italian filmmakers were created, a genre often called sword and sandal films that featured a lot of ancient buff guys with swords saving cities, and of course beautiful damsels in distress. While many were low-budget affairs, they soon evolved into epic spectacles while still on somewhat limited funds. Among these films the Greek semi-god Hercules would become one of the more famous and successful. Hey, Greek mythology is in public domain, so you can develop a franchise that has high name recognition without having to pay royalties. Writers were a dime a dozen and could be paid with a six-pack and a TV dinner. In Europe at the time there were no unions to make sure everyone shared in the wealth. Before long the craze like the other Italian films caught on in the states. They were dubbed in English and given names often far more spectacular than the film, and they became staples of the drive-in teen audience. Now The Film Detective has remastered one of these sword and sandal delights with a new 4K restoration. You wouldn’t believe it, but this one was originally shot with some 70mm elements. And so here we present Hercules And The Captive Women, originally titled Hercules Captures Atlantis.

The film starts with panic among the elites of Greece. There is a rumor that Atlantis is developing supermen to eventually attack and claim the world. King of Thebes, Androclo (Manni) pleads with his friend Hercules, played by Reg Park, to join him in an expedition to get to the truth and stop the plan. It’s a very small crew, with the King, a short but feisty loyal servant Timoteo (Furnari), and Hercules’ son, who has stowed away without his father’s permission. The ship wrecks, and by the power of cinematic coincidence they are washed on the shores of Atlantis but separated. Hercules finds a maiden being sacrificed to a god. Ismene (Efrikian) is the daughter to Atlantis Queen Antinea (Spain) and has been set to die to appease the gods who threaten to destroy Atlantis. Hercules isn’t going to make friends or influence people by saving her life. Yet as mad as the queen might be, she kind of falls for the big lunk. That is before he interferes in her plans. Androclo is there, but he appears to have been brainwashed and fights with his strong friend. After yet another rescue of the princess and discovery that his son is also there, Hercules finds a pit where thousands of slaves are kept. The Queen has discovered a strange rock that gives them the powers of a superman but also places them under her control. Of course, she pleads with Herc to join her and rule by her side, but the big guy isn’t having any of it. That’s too bad for the Queen and too bad for Atlantis, because they all fall down and go boom. And that’s why you’ll never see a unicorn to this very day … forget that. That’s another story … sorry.

The restoration of the print is quite nice. Age still shows, and there are certainly some scratches and other artifacts. But color is quite remarkable for the age. You will also be taken by the scope of the film when you consider its budget and box office expectations. There are some large sets here and some rather impressive f/x have the city shakes apart before finally exploding and sinking into the sea.

Ray Park isn’t going to win a ton of accolades for his acting skills. He was an award-winning actor who only starred in a few of these kinds of films. Where he really made his mark on the world is that he brought another wannabe bodybuilder under his knee after his film career ended. That wannabe was Arnold Schwarzenegger.

The film comes with a 20-minute history of the Italian sword and sandal films and the MST3K version of the film. The film has been up and down. It’s made good money, and it’s been used for a laugh. That it should be restored and released on its own merits and place in film history. “It was ordained by the gods.”

Gino Sassani is a member of the Southeastern Film Critic's Association (SEFCA). He is a film and television critic based in Tampa, Florida. He's also the Senior Editor here at Upcomingdiscs. Gino started reviewing films in the early 1990's as a segment of his local television show Focus. He's an award-winning recording artist for Omega Records. Gino is currently working on his 8th album Merchants & Mercenaries. Gino took over Upcomingdiscs Dec 1, 2008. He works out of a home theater he calls The Reel World. Favorite films: The Godfather, The Godfather Part II, The Body Snatcher (Val Lewton film with Karloff and Lugosi, not the pod people film), Unforgiven, Gladiator, The Lion King, Jaws, Son Of Frankenstein, The Good, The Bad And The Ugly, and Monsters, Inc.
Independent Film Round-Up For April 2020: Film Movement The Marksman (Blu-ray)