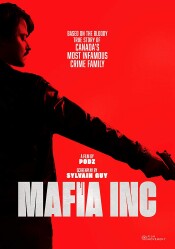 I’m happy to report that I found something enjoyable about all four of these films. Granted each one did have some tidbits that I could do without, but all in all each film helped me to expand my horizons. I was also grateful to have variety with each film actually being of a different genre; there was action, there was suspense, some tenderheartedness, and even a little education. I couldn’t ask for more than that.

Mafia Inc. is by far my favorite of the four movies included on this roundup. It is base on a non-fiction novel called Mafia Inc.: The Long, Bloody Reign of Canada’s Sicilian Mafia and depicts the dual perspective of Frank Paterno, a mafia don looking to legitimize his criminal empire, and loyal foot soldier Vincent. In the beginning, Vincent is a member of the Paterno crime family; however, after he commits a heinous act that even they cannot forgive, he has a falling out with the mafia and subsequently conducts a war against the family that ends with a good deal of bloodshed.

The key takeaway from this film is that there are no good guys involved here. The film attempts at times to humanize Vincent via showing his estrangement from his biological family and the importance that the Paterno family has to him, but the simple truth is that once you see the heinous act he committed early on, you immediately recognize why the mafia disowned him.

That is not to say the Paterno family is without sin, given the ruthless manner in which they conduct themselves for nothing other than money. Once again there are no heroes here; it is just varying degrees of evil. Even so, the film does have its intrigue, especially when things come full circle in the final scene when a character’s remaining friend becomes an enemy.

This sweet tale showcases the love between two siblings: Lisa, a gifted playwright suffering from writer’s block, and Sven, an exceptional actor whose career has been place on hold while he battles cancer. Lisa is the central character as she begins to neglect the other aspects of her life in order to take care of her brother. Over time this devotion takes a toll on her marriage, her children, and her own career. It is a touching tale that is very relatable, exemplifying the connection between family members. The story unfolds at a decent pace, though some scenes can feel a bit long-winded, particularly the aftermath of the argument between Sven and his mother where Lisa is left standing in the hallway. For a second, I actually thought the film had frozen. The film does take quite the downward spiral for one of the siblings, and surprisingly not the one I expected.

I will say that while I enjoyed the film overall, the ending kind of left some things up in the air for me. It was like it just stopped without anything really being resolved. I would have hoped for a more cathartic ending to help the audience come to terms with everything.

Yalda: A Night For Forgiveness

Imagine being sentenced to death for a crime and the only person who has the power to prevent your execution is a family member of your victim. Now that’s what I call a top-notch premise, and that is what we have in Yalda: A Night For Forgiveness. Maryam is condemned to death for the murder of her husband, and the only chance she has to save her life is to beg forgiveness from Mona, her husband’s daughter. In some cases, or perhaps in most cases, the potential to be granted forgiveness by the victim’s loved one is a stretch, and your demise would be a forgone conclusion. However, this film has a couple of twists and turns in it. For one, the entire event is being televised for an audience of millions.

The film takes you on a bit of an emotional rollercoaster, and we are right there with Maryam as she attempts to explain her actions to a seemingly indifferent Mona. I have to give kudos to Behnaz Jafari for the manner in which she was able to convey indifference, as well as maintaining a cold, calculating presence throughout. This was an important aspect for maintaining the tension needed to overcome the crazy talk-show format in which this event was being broadcast. While at times it does have the feel of a Maury episode, those twists and turns make you keep watching. So be prepared to be hooked until the end.

I’ve seen his work, but I’d never known the name. He’s worked with Marilyn Monroe, Sharon Stone, Cate Blanchett, Antonio Banderas, Elle Fanning, Paul Newman, and countless others. Douglas Kirkland is a man said to be on the cutting edge of fashion, photojournalism, and portraiture. A sixty-year veteran of photography, Kirkland has shot the stars of over 150 motion pictures. To have such a long and storied career in that industry, you have to be very good at what you do, and he has no shortage of people in this documentary willing to sing his praises. Despite the countless accolades and people lauding him, the film avoids feeling like a puff piece.

It’s actually an origin tale following the legendary career. I was especially fond of when he discussed working with Marilyn Monroe; ooking at the photos and seeing the beauty of them truly showed why his work has stood the test of time.

While I did enjoy the film, there were periods of tedium that led me to believe that there were areas that could have been trimmed to reduce the runtime. Namely during the introduction, where we receive a great deal of praise on his behalf; given that many of these same people are featured prominently throughout the documentary, the introduction could have been shaved a little. I did enjoy getting to hear firsthand from Kirkland himself and hearing about his experience directly from the source, especially when he speaks about his experience on The Sound of Music. Being able to hear it all from the subject made a great impression for this film.

Jeremy Butler is a film school graduate of the International Academy of Design and Technology. He is been writing for Upcomingdiscs since 2012; however, movies have played a big part of his life for much longer. Favorite genres include horror, science fiction/fantasy, and comedy. Favorite movies are V for Vendetta, Boondocks Saints, Kiss Kiss Bang Bang, and The Godfather.
Ancient Aliens: Season 13 Hercules And The Captive Women (Blu-ray)