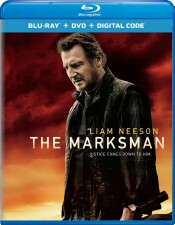 After filming Cold Pursuit in 2019, Liam Neeson announced he was done with his flirtation with action films. They had opened a new genre to the actor starting with Taken and created a nice boost to his career as an unlikely action star. He said he had some reservations about the genre. It didn’t help that he revealed at the same time that he once roamed the streets looking for a black man to kill over the rape of a friend. It looked like it wasn’t just action films that were over for the actor. I honestly expected there to be more trouble than there was, given the current climate. Somehow he kind of got a pass after apologizing for the remark. But he wasn’t being offered the kind of high drama roles he was expected. So in less than a year he was back as an action figure, and that appears to be something he won’t really be quitting in a long time. I get it. I was about to attend my fourth Elton John farewell concert since the first one back in the early 70’s. There’s something about getting the bug deep in your bones that makes it hard to let go. And let’s be candid here, shall we? The pay ain’t to bad either.

Liam Neeson plays Jim. He’s a recent widower who lives on a ranch in Arizona at the Mexican border. His wife died about a year ago from cancer, and her medical bills have left him pretty much wiped out. He’s on the cusp of losing his ranch. He spends his free time patrolling the area for illegals. He’s got a walkie talkie that puts him in contact with the local border patrol where his stepdaughter Sarah (Winnick) is in a command position. On one of these patrols he happens upon a woman, Rosa (Ruiz) ands her son Miguel (Perez) slipping through a hole in the fence. He stops them but ends up in a gun battle with cartel warriors who are trying to get to the woman and her child. Her brother got himself in deep trouble with them, and now they plan on killing his family. The gunfight leaves Rosa dead after securing a promise from Jim to get her son to the safety of family in Chicago. He instead turns them in.

After he realizes that Miguel will be deported and killed, he breaks the kid out of detention and hits the road to Chicago. He is being chased by the Cartel led by Juan Pablo Raba as Mauricio. It wasn’t just Rosa who was killed in the shootout. His brother was killed by Jim, and now his pursuit is also personal. The film takes them on the road where he must protect the boy and try to survive himself. He breaks into his Taken cadence often throughout. One is particularly reminiscent when he tries to convince a gun shop owner that he can’t wait on a background check and assures him his motive are pure. It’s straight out of Taken. There are several phone calls with Sarah that will also provide you with some flashbacks to that film.

The Marksman puts Neeson back in the action seat but with some subtle reservations. Clint Eastwood was once the original action star, and as he approached his 70’s, 80’s and now 90’s, he’s found roles that play to his elder status, and he’s turned in some wonderfully emotional roles in those years. This film appears to be custom-made for that kind of a movie. I could very easily see Clint in the role. The film plays a lot to those strengths that Neeson, as good an actor as he is, just hasn’t quite mastered. All of those later-day Eastwood trappings are here. There’s a nuanced score that often features a single instrument, most often a piano or guitar. There are the rugged, baked-in attitudes that need to be questioned in a new age. Neeson certainly starts with a “get off my lawn” personality that needs to change to fit a circumstance and ends up becoming somewhat of a paradigm shift by the rolling of the end credits. There’s a lot of Gran Torino to be found here, but it doesn’t really stand up to that superior film. The Eastwood connections are not accidental. Jim and Miguel end up watching an Eastwood film in a motel, and the film has a very real connection to those later-stage Eastwood films. Director Robert Lorenz produced Eastwood films like Gran Torino and directed Eastwood’s Trouble With The Curve. So these nuances are completely conscience throughout the film. Unfortunately, the style doesn’t quite fit Neeson, at least not at this stage of his life. Neeson isn’t as good as a still character and falls back on the familiar cadences and characteristics of his Taken character, and the two clash here. Lorenz attempts to serve two masters here, and it falls a bit short of the … mark.

The Marksman is presented in its original aspect ratio of 2.39:1. The 1080p image is arrived at with an AVC MPEG-4 codec at an average 30-35 mbps. The hig- definition image presentation is pretty spot-on. It shines the most in many of the establishment shots, particularly of the desert sky. There are some magnificent sunsets here with a nice display of reds and oranges against a fading blue sky. Detail is high, particularly in the close-up shots where you can get some of those character moments from strong facial expressions. Black levels are fair and allow some nice shadow definition. This is by no means a perfect image presentation. There is some noise in a couple of the exterior shots, but nothing that takes away from the exceptional cinematography.

The DTS-HD Master Audio 5.1 is pretty much serviceable. There’s not going to be a ton of sub to build the conflict scenes, but that’s not where the audio presentation chooses to spend its resources. There’s a nice quality to the silence, even if it creates some awkwardness with Neeson at times. The simple score delivers on the emotional beats, and the dialog is always front and center. Expect a little ear candy in the surrounds from time to time, but this was never intended to be a very aggressive soundtrack.

The Making Of The Marksman: (8:19) The feature is pretty brief and very much like your typical making-of feature. Not a lot of time for detail, but there are some good behind-the-scenes moments. The actors deliver their interviews from a hotel room bed, and Liam Neeson is noticeably absent from the feature.

With the onset of COVID-19, this film never stood a chance of a box office release. I’m not sure that wasn’t a good thing in this particular instance. The film ends up delivering a made-for-home-video look even if the cast and crew point more toward a theatrical release. I don’t think it would have done very well in a normal release environment. It establishes a nice niche here, where it would make a fine rental. The question might be posed if this is a new direction for Liam Neeson into the quiet action films that have worked so well for Clint Eastwood. The difference is that Eastwood has become a great director as well and can pick his on-screen moments more carefully. Would Eastwood have made this a better film? “I’m wondering that myself.”

Gino Sassani is a member of the Southeastern Film Critic's Association (SEFCA). He is a film and television critic based in Tampa, Florida. He's also the Senior Editor here at Upcomingdiscs. Gino started reviewing films in the early 1990's as a segment of his local television show Focus. He's an award-winning recording artist for Omega Records. Gino is currently working on his 8th album Merchants & Mercenaries. Gino took over Upcomingdiscs Dec 1, 2008. He works out of a home theater he calls The Reel World. Favorite films: The Godfather, The Godfather Part II, The Body Snatcher (Val Lewton film with Karloff and Lugosi, not the pod people film), Unforgiven, Gladiator, The Lion King, Jaws, Son Of Frankenstein, The Good, The Bad And The Ugly, and Monsters, Inc.
Hercules And The Captive Women (Blu-ray) Those Who Wish Me Dead