Posted in: The Reel World by Jeremy Butler on June 5th, 2021 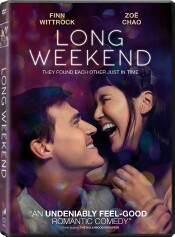 “All I know is that girl came into your life for a reason.”

A love story that transcends time and space. Now, granted, this is not a brand new occurrence; we’ve seen several examples of characters falling in love despite not being from the same time. I mean, there’s The Time Traveler’s Wife with Eric Bana and Rachel McAdams (which is currently slated to become an HBO series featuring Theo James and Rose Leslie), Kate and Leopold with Hugh Jackman and Meg Ryan, and who could forget About Time with Domhnall Gleeson and again Rachel McAdams. However, I dare say that Long Weekend may have just revitalized the idea. It certainly managed to hold my interest despite a twist that took this film out of the realm of the traditional romance and infused it with a little bit of science fiction. Initially when the science fiction was introduced, I couldn’t help my eye roll, especially given that it was spoken aloud, it was literally the last thing that I expected to hear. On the surface, it was utterly ridiculous, but on the other hand, it had shock value, and what more can you ask for?

The film follows Bart (Finn Wittrock, American Horror Story), as he just starts to piece his life back together following the death of his mother, which led to his nervous breakdown, which led to his fiancée leaving him. Up until this point, Bart is leaving a relatively solitary life with no excitement. All that changes when he meets Vienna (Zoe Chao, HBO’s Love Life). The two have an amazing night together, and they just instantly click. However, that is not to say that there aren’t any red flags, such as Vienna possessing an obscene amount of cash or the fact that she doesn’t have a license or a phone. These red flags become a bit much for the barely-holding-it-together Bart, who demands an explanation. That’s when she drops the most unexpected bomb: she’s from the future.

In this revelation, I was completely on par with Bart’s reaction to this news. He asks her to leave; however, he allows her the opportunity to explain herself, and while I didn’t find it credible, I understand how Bart was able to. For the sake of moving the plot forward, her explanation was sufficient, albeit farfetched. Thankfully we had Damon Wayans Jr. to relate to as the clear skeptic, as well as provide some comedic relief. His reaction to the news is a highpoint of the film in my eyes. His tangent where he mocks Vienna’s explanation, in which he concludes with, “See, I’m from the future, worship me!” caused me to burst out laughing.

Despite maintaining my obvious skepticism, the one thing I could not be skeptical about was the obvious chemistry between Wittrock and Chao, which was clear from the opening of the film. It was so effortless and natural that it made the more unnatural aspects of the film easier to swallow. Because at its core the film is predominantly about the connection between two people, and that is where the focus remains for the most part. Eventually a logical explanation is presented for everything, but truly his explanation becomes so bittersweet that I found myself relieved when the film chose to end on a more ambiguous note rather than logical. Dare I say, Wittrock and Chao made me such a believer in their connection that I was willing to transcend time and space too just to believe in their love. Needless to say, my wife was a believer from the opening credits, and she found the logical explanation as an impediment to the overall story. Thus, when the aforementioned ending came about, she literally breathed a sigh of relief. That’s some powerful storytelling when you can make your audience root for the illogical rather than the logical.

In summation, Long Weekend is a great date night movie that is both charming and inventive. Finn Wittrock and Zoe Chao will make you believe in the impossible, and this film is most certainly worth watching.

Jeremy Butler is a film school graduate of the International Academy of Design and Technology. He is been writing for Upcomingdiscs since 2012; however, movies have played a big part of his life for much longer. Favorite genres include horror, science fiction/fantasy, and comedy. Favorite movies are V for Vendetta, Boondocks Saints, Kiss Kiss Bang Bang, and The Godfather.
Super 8 (Blu-ray UHD) (4K) The Conjuring The Devil Made Me Do It