Posted in: Disc Reviews by Archive Authors on June 4th, 2021 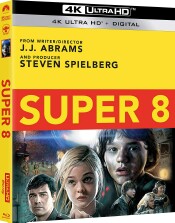 It is 1979. While filming a Super 8 horror movie, a group of young friends on the cusp of adolescence witness a spectacular train wreck. They later discover that they accidentally captured evidence that there was an alien creature on the train, and it is now loose in their small town. But if the mysterious disappearance of dogs, engines, and (increasingly) people wasn’t trouble enough, the military descends upon the community with an agenda far more merciless and inhuman than that of the alien itself. I was 12 in 1979, and I was shooting Super 8 monster movies, so I get the nostalgia that writer/director J.J. Abrams is going for here, and this is an utterly unapologetic exercise in nostalgia. Abrams is out to recreate the experience of a Spielberg movie from that era, and with the man himself acting as producer, the mission is accomplished. Super 8 plays like the Lost Spielberg Movie, with all the wonder, thrills, and sentimentality one would expect. There is so much here that works beautifully. The young cast is terrific, the dialog crackles, the effects are spectacular, and the creature is both menacing and sympathetic, like some unholy version of ET reworked by H.P. Lovecraft.

I enjoyed the movie during its theatrical run, and I liked it even better seeing it again, without inflated expectations, and appreciating it on its own terms. This sounds like I’m setting up a qualification, and I am – a slight one. Of the Abrams-scripted creature features, I do like Cloverfield a little bit more, because that film is directly (and vitally) engaged with the fears and anxieties of its era, while Super 8 isn’t really interested in being about too much more than movie love. On the one hand, its secondhand nature is true to its model: just as this recreates a Spielberg movie, so Spielberg recreated the genres of his youth, whether those be SF (Close Encounters of the Third Kind, E.T. The Extra-Terrestrial), monster movies (Jaws, Jurassic Park) or serials (the Indiana Jones movies). But this means that Super 8 is now doubly referential. And while Spielberg recreates the feel and the experience of his models, the plots themselves are generally of their own time (the period settings of the Indiana Jones films being excepted), and are not re-workings of specific movies (Jaws and The War of the Worlds are first adaptations from another medium – literature – before they echo earlier films). Super 8, by contrast, is basically It Came From Outer Space with the Goonies replacing Richard Carlson.

Is this a bad thing? No, and I like the film more and more. It masterfully gifts its audience with the joy of pleasures many films have forgotten how to conjure, but I didn’t really feel the bracing shock of the new, which was always a feature in Spielberg’s best work.

But in the final analysis, Super 8 does what it sets out to do with brio and exuberance, and is a hell of a good time at the movies. Plus it’s a monster movie. And that makes life very good indeed.

Super 8 is presented in its original aspect ratio of 2.39:1.  The ultra-high-definition image presentation adds a great deal of detail and depth to the film. The iconic train crash delivers some really nice detail, and the HDR pushes it up a notch by delivering wonderful contrast and some bright and vivid explosions. Black levels are important here and the place the film has gotten lost in previous releases. Most of the creature elements occur in very dark moments that have often been muddy. Now the added deep black levels and enhanced shadow definition give you the best look at the creature you’ve ever had. That’s the big bonus. The big story and your reason for considering upgrading your copy.

The Dolby Digital TrueHD 7.1 track delivers some powerful punches. Great stuff here, whether it be rich mix given to Michael Giacchino’s score (here doing its best John Williams impression), the perfectly undistorted dialog, or the placement of the sound effects. For a demonstration of how well the latter are handled, look no further than the train wreck. The approaching train’s sound matches the visuals (front speakers when the train is visible, rear when the characters are looking at it come from behind the audience’s perspective). And when the crash happens, the cacophony is completely enveloping. Add to this some incredible subs, and you get quite the immersive experience here.

Commentary Track: J.J. Abrams is joined by DP Larry Fong and co-producer Bryan Burk. The three have a great deal of fun with their round table, and Abrams is engagingly self-deprecating: “Here’s me with my obsession with lens flare,” he announces, just as said obsession is becoming blindingly obvious.

The Extras here are on the UHD disc (there is no Blu-ray copy here) and is in HD with no HDR. It looks pretty much the way it looked on Blu-ray.

Making-of Featurettes: (1:37:15) Eight of them, combining into one feature-length documentary, covering everything from auditions, to the score, to Fong’s sideline as a (quite impressive) magician. They’re all relatively standard-issue, but the cumulative result is a wealth of information.

Deconstructing the Train Crash: Now this is absolutely exhaustive. It is a massive interactive slide show. Images are divided into Pre-Production, Production, and Post-Production, lined up on three timelines. Move to stop, check out the descriptive label, and check out the image. There is a lot here.

A delightfully old-school monster movie (and oh, how it ages me to call a movie that brings back 1979 “old school”). This one’s a great purchase, as it will reward multiple viewings.