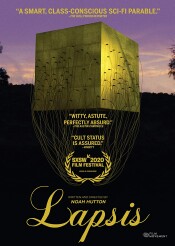 “Welcome to the unlimited possibilities of the Quantum.”

It’s a somewhat near future, and airport baggage handler Ray (Imperial) is in need of more money. He doesn’t have the new Quantum computer, and he discovers that he isn’t able to access accurate data on the net because everyone is now using the new format. He also has a brother Jamie (Howard) who is suffering from Omnia, which is a disease that makes you tired all of the time. It’s considered by many to be fake, and “clinics” have popped up to treat the disease with odd … and very expensive treatments. It’s a scam, and Ray has bought into it. So he’s going to need money.

A neighbor takes “pity” on Ray and offers him a medallion chip that allows him to work for CABLR, which is setting up the network for the monopoly Quantum networks. The idea is you spend time out in the wilderness running cable from one giant cube to others to connect this network. The chip gives you an identity, and the one Ray gets is someone with experience. That means he’ll get advanced routes which pull in more money. The catch is that Felix (McDaniel) gets 30% of his take. Out in the woods Ray discovers the job has created its own culture of workers who trudge through the woods with the cable and camp out in tents during the night. He discovers that his “borrowed” identity is someone who isn’t well liked, as he’d had a reputation of screwing over his fellow workers to get in good with the company. You see, there are little robot rovers competing with you on each run. You have to stay ahead of them. If you don’t, you don’t get paid. Ray ends up caught up in a workers’ revolt from what is obviously a kind of pyramid scheme to exploit folks in dire financial circumstances.

Ray meets Anna (Wise), and that’s where he begins to get a peek behind the curtain of CABLR. She’s a bit of a rebel who has discovered ways to “delay” the robots without getting caught, which causes you to get whisked away to who knows where. But he ends up getting into trouble himself and doesn’t get paid. But Felix still wants his 30% and pimps him out again to get it. But this time Ray becomes a crucial member of this workers’ revolt. It’s a wonderful shift in paradigm that makes these kinds of films compelling if the lead can pull it off, and I have to say Dean Imperial pulls it off marvelously. I have never seen nor heard of him before, but he totally sells the part. There’s a little James Gandolfini in both his physical appearance and many of his mannerisms. Madeline Wise is also dynamic as Anna, and the two of them have instant chemistry that begs for more screen time than the story permits. James McDaniel is the most recognizable actor in the film. It was a bit against type to find him in a bad-guy role, as I recall him mostly as the boss in NYPD Blue for nearly a decade. It’s good casting. And that’s so important for science fiction. None of this matters if the characters aren’t drawing us into whatever the parameters of a particular world happen to be.

Low-budget science fiction can be tricky. How do you create unique environments and f/x without a lot of money in the bank? Noah Hutton has found a clever way to do just that. Using remote mountain locations and a large cube he couldn’t even afford to build on all four sides is a wonderful setup for a quite compelling social warning. He also made a deal with the University of Pennsylvania to use crawler robots they were making. The students got field research credit and a chance to put the machines through their paces in return for featuring them in the film. This is the kind of outside-of-the-box thinking that can add real screen cred and actually give something back. It was a clever idea, and I have to ask why more independent filmmakers don’t try this kind of a thing more often. It’s a win-win, and the result for us is a pretty compelling film.

Noah Hutton has a pretty famous pedigree. His parents are Debra Winger and Tim Hutton. But give the guy credit. He doesn’t cash in on the connections. He went his own way and up until now was known mostly for documentary films. This is his first real long-form fictional story, and it’s a pretty good start. He’s obviously keyed into some of the issues that plague us today, and not just in the future. The gig economy has become a huge economic driver, and its vulnerabilities were thrown bare during the pandemic lockdown. But it is also an adaptable economy that was likely back on its feet as services expanded to the new needs of the world. I’m also one of the few people who don’t have a cell phone. Love technology but refuse to buy into the carry-my-life-in-my-pocket culture. That means running into brick walls like Ray when he couldn’t access current important information without the new technology. For me it’s things like concert or football tickets or being able to communicate with a medical facility when you’re a patient. Noah’s world of the Quantum isn’t too far in the future. As a songwriter, I am intimately familiar with what was once said: “We’re already touching the future, in some ways we’re already there.” And the unfamiliar will soon be all too familiar before long. This is the kind of film that asks you to “challenge your status quo”.

Gino Sassani is a member of the Southeastern Film Critic's Association (SEFCA). He is a film and television critic based in Tampa, Florida. He's also the Senior Editor here at Upcomingdiscs. Gino started reviewing films in the early 1990's as a segment of his local television show Focus. He's an award-winning recording artist for Omega Records. Gino is currently working on his 8th album Merchants & Mercenaries. Gino took over Upcomingdiscs Dec 1, 2008. He works out of a home theater he calls The Reel World. Favorite films: The Godfather, The Godfather Part II, The Body Snatcher (Val Lewton film with Karloff and Lugosi, not the pod people film), Unforgiven, Gladiator, The Lion King, Jaws, Son Of Frankenstein, The Good, The Bad And The Ugly, and Monsters, Inc.
Paramount Presents: Last Train from Gun Hill (Blu-ray) The Walking Dead: World Beyond – Season 1