The Walking Dead: World Beyond – Season 1

Posted in: Disc Reviews by Gino Sassani on July 1st, 2021 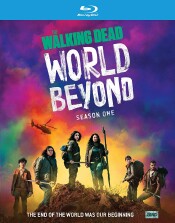 “We’re 10 years in now. I was a little kid. I can barely remember the Night The Sky Fell, let alone what the world was like before. We still live behind walls, and the dead still have this world. And I think that with everything that went away, with everything we lost, with everyone we lost, some people think it can happen again. Some people think that what we have can’t last. Some people can’t believe. But I’m certain of our home city and our alliance with Portland, with the Civic Republic, and I’m certain what’s ahead. We are monuments to the past, but everyone here, all of you, you are the future. We are the future. I’m sure of it.”

There is life after death. For The Walking Dead that life has a pretty solid run. What started with a graphic novel turned into one of the most unique television shows in years. The series has now become a franchise. The original show has 10 seasons behind it. The first spin-off was Fear The Living Dead, which took us across the country to the West Coast and has now run six seasons of its own. The franchise has just recently branched out again. This time it’s The Walking Dead: World Beyond, and it covers a different aspect of this post-zombie-apocalypse world. This time it’s not so much a change in location, which it is, but a change in perspective. This time it’s, in the words of my old late friend Conrad Brooks, for the kids.

Throughout the franchise we have visited man communities that were set up during the years since the zombies. They were usually not as safe as they thought or often run by bad guys who created a human danger for the show’s cast members. As we start World Beyond, we are introduced to Campus Colony, which is somewhere in the mid-west. It’s a university that has been turned into a flourishing community of over 9,000 residents. Life is about as close to normal as we’ve seen to date. They are about to celebrate the 10th anniversary of what they call Sky Fall, the night of the zombie apocalypse, with something they call Monument Day. We also discover they are in an alliance with two other long-term communities in Portland and Omaha. They are all held together by a military group called the Civic Republic, which has sent a representative to Campus Colony for the celebration via helicopter, so we know these guys have some serious firepower and equipment. But they maintain secrets. There is no communication allowed in or out of their HQ, which is located in a secret place … for security reasons.

Meet Iris, played by Aliyah Royale. She’s the class president and super organizer and helping hand in the colony. Her sister is Hope, played by Alexa Mansour. She’s always getting into trouble because she’s too smart for her own good. She can make time-released stink bombs and her own booze and is usually on the wrong side of the colony’s law. Their father was super-scientist Dr. Leopold Bennett, who has volunteered to go to a secret research facility to help teach a future team of bright minds in order to find a cure for the walking dead that these folks call empties. He has been secretly sending messages to the girls and the colony’s main protector and adopted son Felix, played by Nico Tortorella. When he writes that he’s in trouble, the sisters decide to use some info they’ve obtained and sneak out to find the research colony somewhere in New York state. They are joined by Elton, played by Nicolas Cantu, who is obsessed with the entropy and extinction event he believes he is witnessing. He carries an unfinished manuscript from his mother, who never made it to the colony. We know what happened to her, and it’s part of a terrible secret that Hope carries with her. They are also joined by Silas, played by Hal Cumpston. He’s quite introverted and might have killed his father. He’s afraid of his violent potential and doesn’t want to remain in the colony where rumors of his deeds make life rather miserable for him.

The teens are followed by Felix and his right-hand soldier Huck, played by Annet Mahendru. She also has a few secrets in her past, and together they attempt to make it to the research colony, but one of these folks has been guiding the activities for nefarious purposes, and so they may have as much to fear from each other as they do from the empties.

The show is intended to reveal this new world order through the eyes of teens who were too young to remember life before it all went to crap. So this is the first generation growing up in the new world. They are much more naive about what it might take to survive, and some of them can’t even bring themselves to even kill the empties. They certainly see it all from a different perspective, but I find it’s far more colored by their situation than their age, so this is not the huge departure you might be expecting. And regardless of my initial for-the-kids statement, this is not really a kids’ show. I’m sure teens who are into the zombie stuff will like it, but it isn’t going to attract more kids than the other two shows did. The brutal reality of the series remains.

The first thing you should know about The Walking Dead is that it’s unlike any television series you have ever seen before. The images here are intense, and the crew has been given a blank check to create this vision without the burden of censors looking over their shoulders. There are plenty of blood-and-gore effects that rival any of the Hollywood zombie films you’ve seen in the last few years. The makeup effects are handled by the very capable hands of KNB and supervised personally by Greg Nicotero (the N from KNB). KNB isn’t treating this like a television production, and while I personally get tired of the cliché about making a movie each week, this one lives up to the hype. They aren’t doing anything different here than they would do for a big-budget film. The zombies look incredible, and the effects are completely first-rate.

The season is a short 10 episodes.

Each episode is presented in its original aspect ratio of 1.78:1. The 1080p image is arrived at with an AVC MPEG-4 codec at an average 25-30 mbps. The high-definition image presentation gives you the best possible view of the amazing production standards on this series. There is sharpness and detail enough to suck you right into this world. Sure, there are some CG elements that don’t quite look real, but these guys have kept the computer work to a minimum. Most of this is practical, so there is a texture and detail here that can’t fail to impress. Black levels are fair, but this show doesn’t hide in the dark very often. Most of what you see here happens in the cold light of day. It’s a brave choice, one that’s rewarded with this transfer.

The DTS-HD Master Audio 5.1 is just as impressive here. Again, this just doesn’t sound like a television show. It sounds like a feature film with a lot of money to spend on sound design. There’s far more sub activity than I was expecting. The film also does a great job with silence. There are effective uses of silence throughout. If ever a sound were visceral, this is it. You can hear the bone-crunching and squishing sounds of body parts being munched on. Dialog still punches through perfectly.

A Look At The Series: (4:00) Cast and crew offer very general descriptions of the show’s premise and an idea of where it departs from the rest of the franchise. Nothing really too deep here.

Meet The Characters: (6:13) The cast and crew talk about the main characters, but again in very general and vague terms.

The Making Of Season 1: (22:35) Much of this is completely the same as the two earlier features, so you can skip those and go right here. There are some scene-specific behind-the-scenes moments, but too many of the same clips.

I have to admit I was a little worried going into the series. There was evidence that the franchise would take a little bit of a woke move here, and honestly zombies and gore just don’t mix very well with woke. Yeah, there might be a few moments, but that doesn’t dominate the series at all. The characters are compelling enough and the addition of the secret Civic Republic is a rather exciting element to put into play here. So it fits pretty well with what has gone before. I’m more worried that too much of this can dilute the shocking and unique value of the whole thing. This franchise was pretty unique, and the elements run the risk of getting too routine. But it’s here, and we’ll see for how long. “Welcome to the party, kids.”

Gino Sassani is a member of the Southeastern Film Critic's Association (SEFCA). He is a film and television critic based in Tampa, Florida. He's also the Senior Editor here at Upcomingdiscs. Gino started reviewing films in the early 1990's as a segment of his local television show Focus. He's an award-winning recording artist for Omega Records. Gino is currently working on his 8th album Merchants & Mercenaries. Gino took over Upcomingdiscs Dec 1, 2008. He works out of a home theater he calls The Reel World. Favorite films: The Godfather, The Godfather Part II, The Body Snatcher (Val Lewton film with Karloff and Lugosi, not the pod people film), Unforgiven, Gladiator, The Lion King, Jaws, Son Of Frankenstein, The Good, The Bad And The Ugly, and Monsters, Inc.
Lapsis His Dark Materials Season 2 (Blu-ray)