Posted in: Disc Reviews by Brent Lorentson on June 29th, 2021 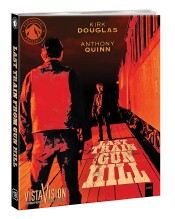 Long before super-hero films became the rage of American cinema, the Western was the original bread and butter that would draw in its audiences to flock to the silver screen. Hollywood cranked out so many Westerns I seriously doubt anyone knows just how many of these films were shot by the studios, not to mention the others that were re-cut with scenes inserted with new stock footage just to re-title a film and put it back out onto the screen.  There are some directors that elevated the genre, John Ford, Howard Hawks, Clint Eastwood, Sam Peckinpah, and then there’s John Sturges who is mostly famous for helming The Magnificent Seven and The Great Escape.  Sturges had a strong 30 year career directing and though he had a few misses when his films were good they were really good so when the offer came along to review one of his Westerns I hadn’t seen I was happy to jump aboard to review the Last Train From Gun Hill.

When Last Train From Gun Hill was made, Paramount studios had created a new style of film called Vista Vision, a flashy name and style to attract audiences to the cinemas.  Basically it was 35 mm film shot horizontally, this was a method that would later be used in 70mm to create IMAX film.  The quality of the picture when using the Vista Vision is incredible and it was pretty much the first thing I noticed while watching this films, the sweeping landscapes look more impressive and just about every shot looks fantastic here, cinematographer Charles Lang who had a successful run of films shooting for Billy Wilder does a incredible job with this smaller scaled western.  Sure the Vista Vision may have been nothing more than a gimmick but the look of this film is what immediately jumps out at me and reminds me of what audiences are missing from movies shot on genuine film.

As for the story, well it’s rather thin and hits on several familiar tropes that we’ve seen in the genre but it’s the performances of its two leads, Kirk Douglas and Anthony Quinn that elevate it and make this a compelling film.  The film opens up with a Native American woman and her son on the road on the outskirts of town when they encounter a pair of loathsome fellows who are up to no good. The son manages to escape, stealing the horses of the attackers leaving his mother behind to be raped and murdered by the men.  When the boy gets to town he goes to his father Marshall Matt Morgan (Douglas) and tells his father the news.  Upon discovering who the saddle belongs to on one of the horses Morgan takes off to seek justice for his wife.  This introduces us to Craig Belden (Quinn), a successful cattle baron that pretty much owns most of the town he lives in, where all the townsfolk fear and respect him. Morgan and Belden used to ride together and considered one another good friends but when it’s discovered that Belden’s son is responsible for the death of Morgan’s wife, it’s no surprise that things get tense. Morgan makes a stand stating he’s taking those responsible for his wife’s murder onto the 9pm train but Belden of course responds that he won’t be letting his son hang no matter what.

The film definitely has a 3:10 to Yuma vibe to it and no matter how often I’ve seen it, the one man taking on a town is always something that will keep me hooked.  What the film does offer is instead of the town being nothing but a group of black coats that are simply trigger happy, their just  a group of people that don’t know the full story and are just going along with what their boss says. The well she’s just a “Squaw”, comment is thrown around a lot, it’s one of those troubling things was common place back then but obviously wouldn’t fly in today’s films.  But it’s Douglas’s performance that reminds the audiences as well as the townspeople that it was his wife and the mother to his son in his attempt to humanize her.  Something that obviously shouldn’t need to be done but back then it was something difficult for people to wrap their heads around.

To some degree the film is a bit of a slow burn, the tension slowly rising as the clock ticks till 9 o-clock where we just know when everything is going to all go down. To help fill this time we are introduced to Linda played by Carolyn Jones who most will remember from the The Addams Family TV show as Morticia Addams. She’s Belden’s girl and is used to try and extinguish the situation when Morgan gets a hold of Belden’s son.  In some ways I feel this is the most dynamic role in the film simply because with the two leads is obvious what motivates these men but with Linda we get to see some real conflict where she has to decide between sticking by her man or doing what’s right and the consequences that come with it.

Despite knowing how this will all end I still really enjoyed this one.  While it’s not quite up to par with the directors bigger hits, this is still a film that deserves to be seen and I’m glad survived to be restored to Blu-Ray.  For those who love cinema, where it’s back to a time before green screen and digital effects, where stuntmen took the falls and the leading men resolved things in a duel, Last Train From Gun Hill hits all the marks on being a good quality Western.

The Last Train From Gun Hill is presented in the aspect ratio 1.85:1.  The 1080p image is arrived at with an AVC MPEG-4 codec at an average of 34 mbps.  The Vista Vision looks great, if anything maybe it looks a little saturated with age but this still looks incredible.  The detail that is captured in the sets and the costumes, to the focal depth is impressive and has me longing for the days when everything was shot on film.  Just the opening sequence alone will have you appreciating the way this was all shot and presented.

The Stereo 2.0 track is as expected considering the film was produced well before the time of surround sound.  Right from the start there is one obvious glitch and that’s with the synching of the sound, it’s off just enough where you can clearly see the sound is ahead of the movement.  This doesn’t really impact the movie as I’m used to watching plenty of poorly dubbed films but I know this will irritate plenty of others.  The dialogue is at least clean with no distortion.  To be clear this is only in Mono so don’t get your hopes up for an immersive presentation.

Filmmaker Focus: Leonard Malton on Last Train From Gun Hill: (7:22) I wish we can get more features with Leonard Malton he is one of the critics that first got me to want to look deeper into film.  Despite this being a brief segment there is a lot of information given here about the history of the film.

While I wouldn’t say this makes my top 10 list of Westerns this is still a really fun film and if you are a fan of the genre this is definitely worth checking out. The cast is above average for these kinds of films my only complaint is that the story is just too familiar and doesn’t offer many surprises but to a point that’s why the genre is somewhat of a comfort food for audiences like horror slashers, we know all the beats of the film and typically how it ends but still we are drawn to them.

Brent Lorentson is a horror writer and film critic based out of Tampa, Florida. With a BA in Digital Film, he co-wrote and co-directed Scavenger Hunt. His short stories have appeared in various horror anthologies. In 2019 his short script Fertile Blood will be a part of the anthology horror film Slumber Party. He is currently working on his first novel A Dark and Secret Place set to be released in late 2019. Favorite Films: Taxi Driver, Fight Club, I Saw the Devil, The Wild Bunch, Dawn of the Dead, A Clockwork Orange, Pulp Fiction, Heathers, The Monster Squad, and High Fidelity.
F9: The Fast Saga Lapsis